A Disappointing Visit to Neuschwanstein Castle

During my second visit to Munich this spring, I told Andy I wanted to see Neuschwanstein Castle. It’s the most famous castle in Germany, and even though I knew it was overrated, I still wanted to see it. It was a holiday weekend, but the holiday was a Thursday, so my friend Andrea, who was staying in Munich for three months, had to go back to work that Friday. Andy and I choose that day to go see the castle, a couple hours outside the city.

We decided against a tour from Munich because we generally prefer to go on our own. I wanted to see both Neuschwanstein and Hohenschwangau Castles, both of which are some of the best castles in Germany. But they also require booking a guided tour through the castles. Without good information about how long it takes to get from one castle to the other and no control over what time we would be assigned, it felt like a gamble. Plus you have to pick up your tickets an hour ahead of your tour time, and the tours are rather expensive for just 30 minutes. In the end it seemed like too much hassle, and I usually like the outsides of castles better anyway, so I just didn’t bother with the tours.

Andy and I took the earliest train we could with a Bavaria region ticket, ate lunch in the small town of Füssen, and then hopped on a bus up to the village of Schwangau where the castles are. We started with Hohenschwangau Castle and wandered around the outside taking pictures. It was rainy, foggy, and overcast, which didn’t make for the best pictures, but the castle and the views from up there were pretty. 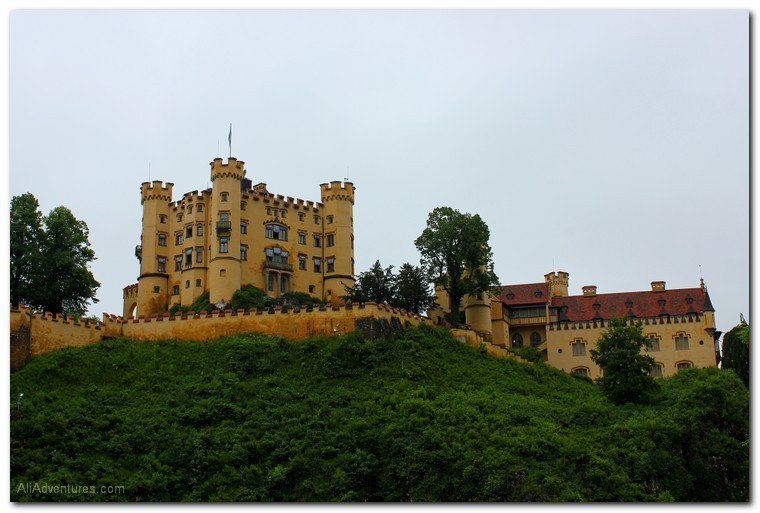 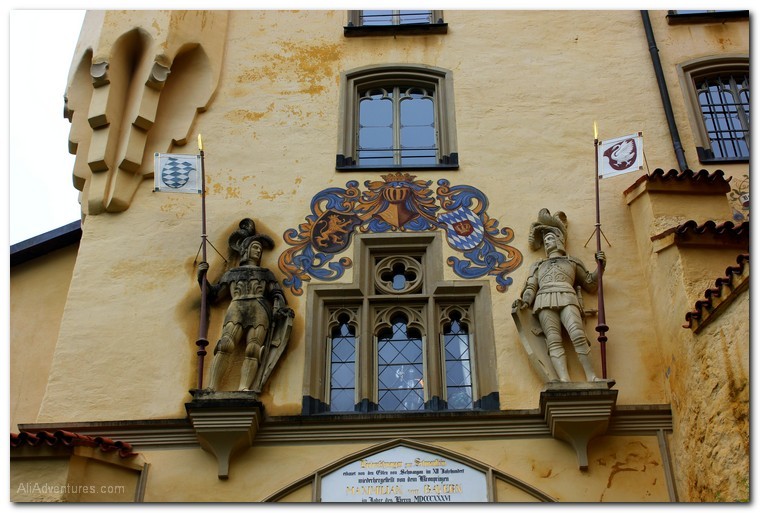 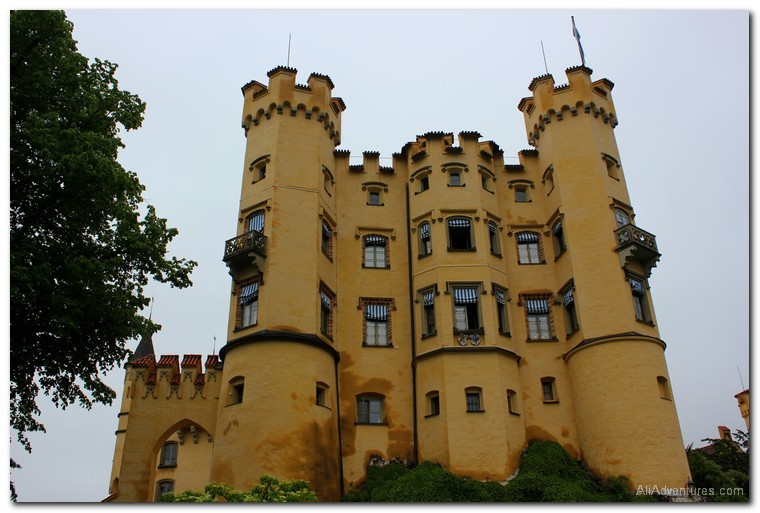 Walking back down from the castle along the road (instead of the dirt path and stairs we took to go up) took us past photos of the royal family who used to live there. Then we arrived at an area that overlooked the nearby lake, which was pretty but I’m sure would’ve looked even better in good weather. 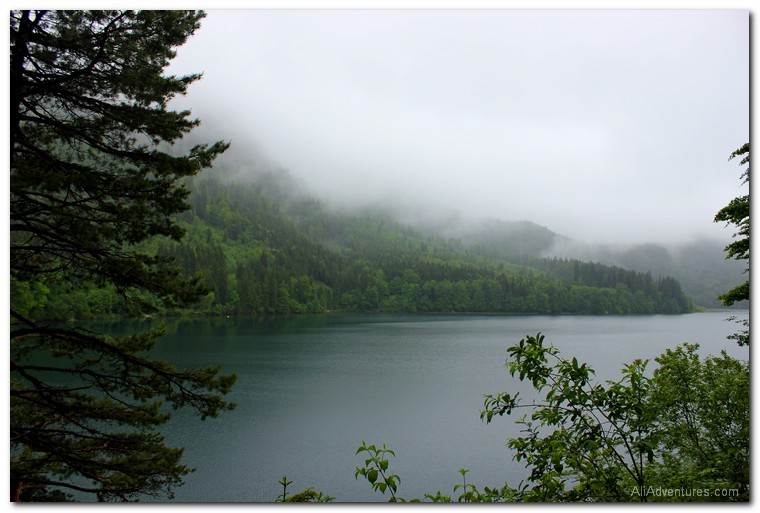 Neuschwanstein Castle in the fog

Back in the center of the village, we had to wait in a ridiculous line for the bus that goes up the mountain to where Neuschwanstein Castle. When we finally got up there, we made our way to the bridge where you can get that postcard view. It’s really all I wanted was that picture. But that fog was plaguing us, and I could barely even tell there was a castle there. Since this was really just a list-ticking day for me, I was really upset. I have no desire to ever go back to Neuschwanstein, and the pictures I came away with were awful. This is probably the best one. 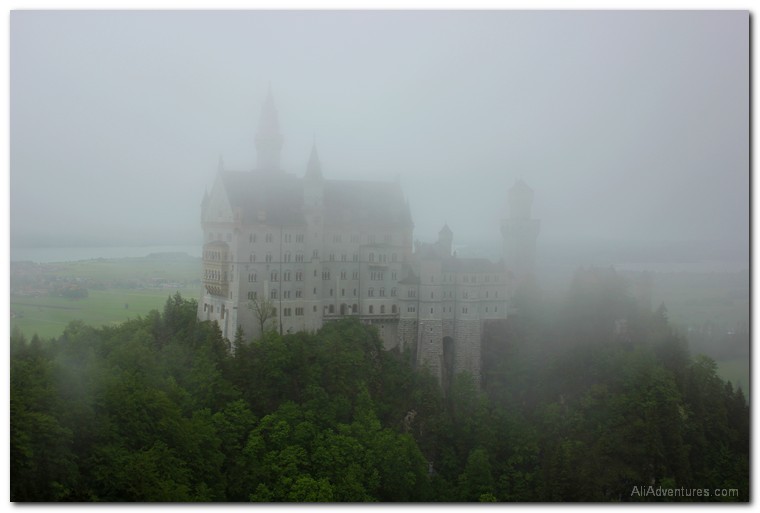 The view from right in front of the castle was better, if only because we were so much closer to it. 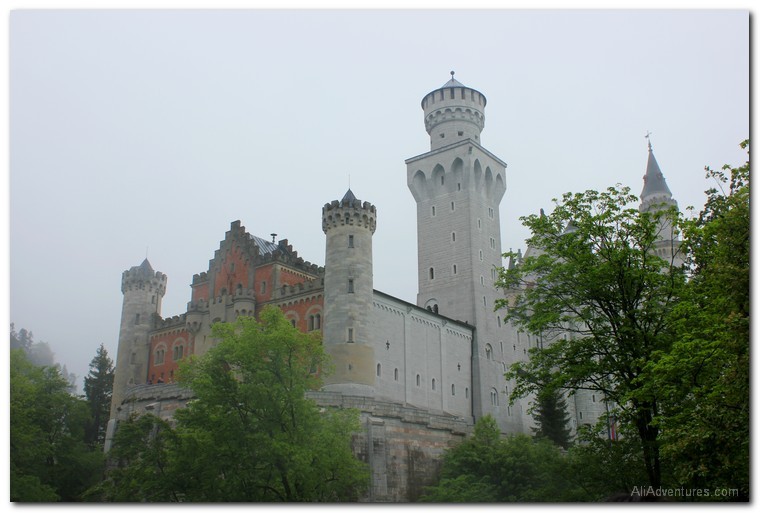 Eventually we called it quits and walked back down the mountain to find the bus to the train station. And of course, the bus got stuck in traffic and we missed the train by about 10 seconds. An hour later we were on the next one back to Munich. I’m glad I got to see Neuschwanstein Castle, and it’s officially checked off my list, but it would’ve been so much nicer if we had gone the next day when the sun was shining. It was a reminder of why I try not to be so much of a list ticker anymore.

Want more German castles? Check out this 1 week itinerary in the Rhine Valley.