“By the end of this tour, you will understand why Munich is better than Berlin could ever hope to be.”

It was one of the first things our guide said to the group. I looked at my friend Andrea with doubt. Berlin had already stolen my heart when Andy and I lived there for three months last year. Even though I could believe Munich had a lot to offer, I wasn’t so sure it would beat out Berlin in my mind.

My first visit to Munich was on a 10 day tour to Europe when I was 16, so not only was it a short stay, but I can’t say I remember much about the city from 18 years ago. This spring I visited Munich twice since my friend was there for work for three months. The walking tour we went on took us through the center of the city to see many of the big tourist sights, starting with Marienplatz and the Rathaus. 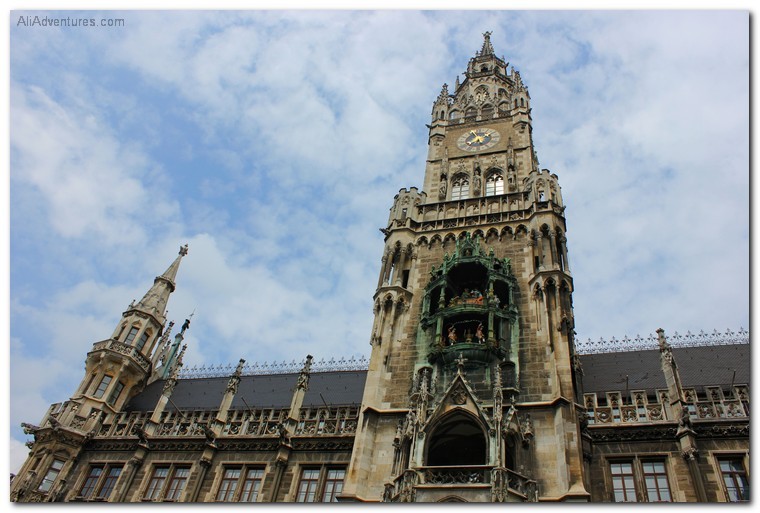 We went to the famous Frauenkirche and heard the legend of how it was built by the devil. We also learned that, even though 80% of the city was destroyed during World War II, the towers of cathedral were left unharmed. Because of their height, the towers were easy to spot, which helped with navigation, so they were not bombed. The cathedral also helped protect many items for local Jewish synagogues during the war, and in return the Jews helped rebuild the cathedral after the war. There are symbols on the ceiling representing each group that helped rebuild, including a menorah.

We saw many other sights, like the Hofbräuhaus, the Opera House, and Viktualienmarkt, and we heard many more stories about Munich and its history. Berlin seems like the obvious place to go for World War II history because of the wall, but Munich has its own war stories to share. Even the odd flat appearance of so many buildings that still haven’t been completely rebuilt and have their facades painted on was a reminder of the lasting effects of the war.

An afternoon in Viktualienmarkt

About a month after my first visit to see my friend, Andy returned with me on a long holiday weekend. While Andrea was working on a project for a few hours, Andy and I wandered around in the city center. Viktualienmarkt is one of Munich’s markets, and probably the most popular one due to its location. We ate lunch at one of the many local stalls and then went to check out all the different things for sale. It was like most markets, with fruit, vegetables, cheeses, meats, flowers, and local items, but with its own unique Munich atmosphere. Plus there’s the giant maypole in the center in Munich blue and white with the symbol of Munich’s beer purity rules.

The thing I liked the most about Viktualienmarkt was the beer garden. Beer gardens in Germany, in general, are owned by individual breweries. But this particular one is owned by the city of Munich, so instead of just having one brand of beer, they rotate the local Munich brands. One person told us each brand stays on tap for about a month, though I’ve also heard each brand stays until it runs out, which means the more popular brands will go faster.

Andy and I spent a few hours just relaxing in the beer garden. The big long tables mean you squeeze in with other people, and we had some interesting conversations with several pairs who came and went while we were there.

During Andrea’s three months in Munich, she was living right on the edge of the English Garden, so we met her over there on our last day. There are several beer gardens just within the park, and we went to the one on the lake. People were boating and feeding ducks, though it wasn’t quite warm enough to swim. Apparently people sunbathe here, often nude, on any remotely sunny and/or warm day, even while on their lunch break. We did not. But I did enjoy a sausage and potato salad for lunch, while Andrea brought us one of the comically large Bavarian pretzels you can only get in that part of the country. It was too large for my camera, so sadly I have no pictures of it.

Overall I had a great time during my two weekends in Munich. It’s hard to compare any two cities, especially one I’ve spent three months in versus one I’ve only spent six days in, but Berlin is still the winner for me. Munich is great, and I had a lot of fun, but somehow the grit of Berlin beats the polish of Munich. Our tour guide on that first day may not have convinced me that Munich is a better city, but I did really enjoy my time there.