5 Days in a German Hospital – the Ultimate Culture Shock

March was a bit of a blur.

I’ve mentioned a couple times here that I have a disease called ulcerative colitis. It’s an intestinal disease that I have to take medicine for each day for the rest of my life. It usually doesn’t bother me, but occasionally problems come up. I won’t get into too much detail, but it affects my large intestines, so I’m sure you can use your imagination. Or, you know, don’t.

To make a long story a bit shorter, I started feeling sick towards the end of February, and what initially seemed minor quickly took a turn for the worse. My doctor decided to run some tests, and since he didn’t like what he saw, he admitted me into the hospital on March 14th.

I’ve never had more than an outpatient procedure at a hospital before, so I can’t really compare a hospital stay in Germany to one in the US, but I imagine they’re never fun experiences. I ended up spending five nights there, and while I was incredibly miserable, I did my best to laugh at some of the things I thought were ridiculous.

The roadside attraction no one wants to see

Once it was agreed that I would be checked into the hospital, a couple of nurses wheeled my bed down the hall. After a minute or two, they pulled me over into a little nook in the hallway. Kind of like pulling over onto one of those scenic outlooks on the side of the highway.

There a doctor was waiting to do an EKG. She lifted up my shirt, stuck little suction cup type things to me, and checked out my heart. Again, I’ve never had a hospital stay, but I can’t imagine in the US they would ever have me on the side of a hallway, boobs exposed to anyone passing by, to do an EKG. At least it was quick and efficient, and I was still a little drugged up.

The worst way to be woken up

I spent my first two nights sharing a room with a woman who was at least in her 80s. I’m not sure exactly what was wrong with her, but she couldn’t walk. Unfortunately this also meant she needed assistance to go to the bathroom. I never saw bedpans at this hospital, so when she needed to take care of business, she rang the nurse call button and someone came to help her into what was basically a wheelchair with a bucket attached to the seat. And there she went, 10 feet away from me, all hours of the day and night.

As much as I felt bad for the woman, being woken up at 4am to the sound of someone crapping in a bucket 10 feet away from me was not ideal for my own rest and recovery. Especially when the nurse walked away in the middle of it, failed to return in a timely fashion, resulting in me having to hit the call button again for the poor woman. Luckily they were able to move me to another room after two nights.

My remaining three nights were spent with a woman about my age who had recently been diagnosed with diabetes, so in general she was fine, but they were trying to get her blood sugar levels under control. However, sleep was still not something either of us was really destined for. Everyone’s medication is on a set schedule, so one of my roommate’s insulin appointments was at 2am, and my IV medications started at 6am. Plus the night nurse those three nights was really loud and seemed to think it was perfectly reasonable to turn on all the lights and attempt full conversations with us when she came in and woke us up.

How does a hospital not understand dietary restrictions?

Food was another odd thing to deal with. I didn’t expect gourmet cuisine at a hospital, but I did expect them to read the form we filled out listing dietary restrictions. I don’t have any food allergies, but when my colitis is acting up I reduce or eliminate things from my diet that could make it worse. Dairy, fatty foods, excessive fiber and vegetables are all things my digestive system doesn’t need to be processing when I’m having severe intestinal issues.

Despite my requests, my breakfast four out of five days was a hard roll (my doctor took one look and said “please don’t eat that”) along with a slice of cheese, a cup of coffee, and a slice of wheat bread. Each time I sent it back requesting just some sliced white bread and a little butter.

Lunch and dinner was even more complicated. One night my dinner included a pile of raw tomatoes, celery, a mystery vegetable that seemed similar to celery, apple sauce and lactose-free cream cheese. Another night it was three slices of lunch-meat-style turkey (one of which had little bits of broccoli in it) and a hard boiled egg. Lunch one day was a veggie bake, so onions, carrots and who knows what else covered in cheese and baked in the oven so it sort of looked like lasagna. I muddled my way through the lunches, but usually had Andy bring me food for dinner.

Because I was on so many different medications, I had one of those IV things in my arm for easy all hours access to my veins. In the process of moving me from my first to my second room, a little of the IV fluid leaked onto the bandages holding the IV port in place. I asked a nurse if I could get new gauze, and she decided the IV itself needed to be replaced. Instead of waiting for the doctor to look at it and decide for himself, she took it out.

At this point my arms were rebelling from being poked at for IVs and blood samples, and he had to resort to the top of my hand. He warned me that if that one had to be replaced, he would have to try my neck next. Thanks for freaking me out. At least I ended up with this lovely mesh half glove and got to spend three days feeling like Madonna. 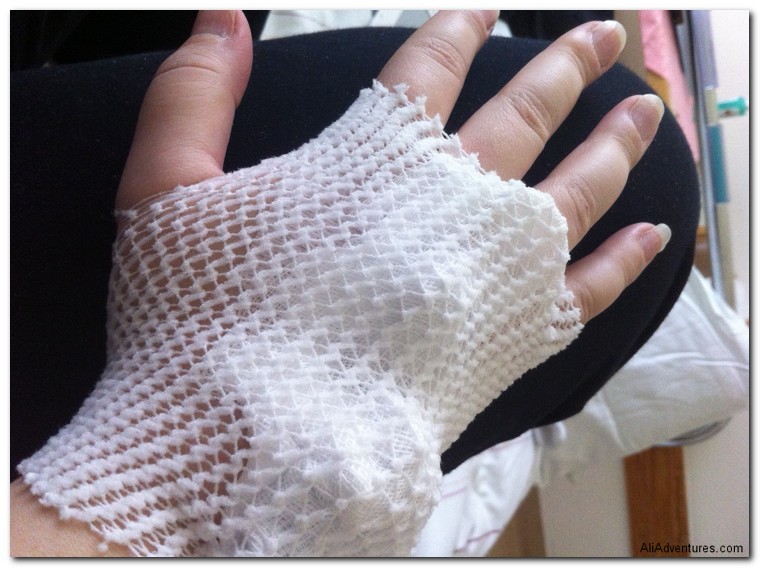 I say hospital, you say Krankenhaus

To top things off, this whole time I was dealing with a major language barrier. The doctors I dealt with all spoke English well enough that I felt reasonably comfortable, but it’s still a strange thing dealing with your health and wondering if anything is getting lost in translation. The nurses were hit or miss. Some spoke great English, some none at all. So I very often had to attempt German. I’m very glad I’ve passed my German integration course, but that does not make me fluent by any standards. It was very stressful to try to decipher instructions or ask questions in German, and it made the whole experience even harder to deal with.

After being released on March 19th, doctor’s instructions have been “sit on the couch, relax” and I’ve been doing just that for the past few weeks. Just in the past few days, I’m slowly starting to feel better. I have been so lacking in energy and strength that even taking a shower could reduce me to tears, so I certainly didn’t have the mental capacity for blogging. But I’ve turned a corner, and I’m enjoying jumping back into writing.

Now back to the regular posting schedule for Ali’s Adventures. My post about our travel announcements will be up on Thursday, so be sure to check back for that. I’m really excited to share with you what’s coming up next!

Sign Up
Gaining Confidence Through Travel Introducing Beyond Vacation