Visiting the Tikal Ruins in Guatemala

Visiting the ancient Mayan ruins of Tikal was something we were both really looking forward to on our trip to Central America. Not only are they one of the most famous sets of ruins in the region, but they were also used in the filming of one of the Star Wars movies (though very briefly) which added to the excitement for Andy. After spending several days in Belize, Tikal in Guatemala was our next stop.

Tikal was built between 900 BC and 700 BC, and it wasn’t rediscovered until the mid 1800s when farmers were looking for gum trees. Today only 30% of the ancient city has been uncovered, but that was plenty for us to explore in one day.

>>For a different view, you can get up super early and take a sunrise tour of Tikal.

We were able to climb a several of the ruins, starting with this pyramid that was still partly covered in vegetation. 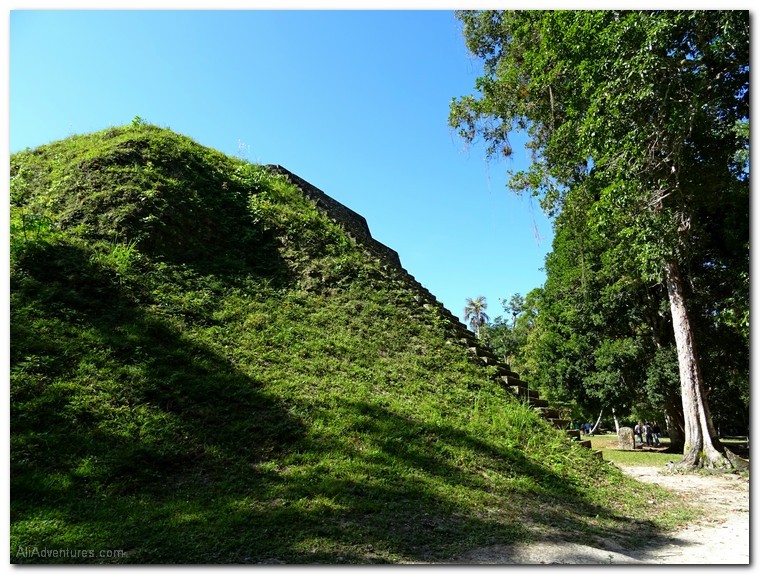 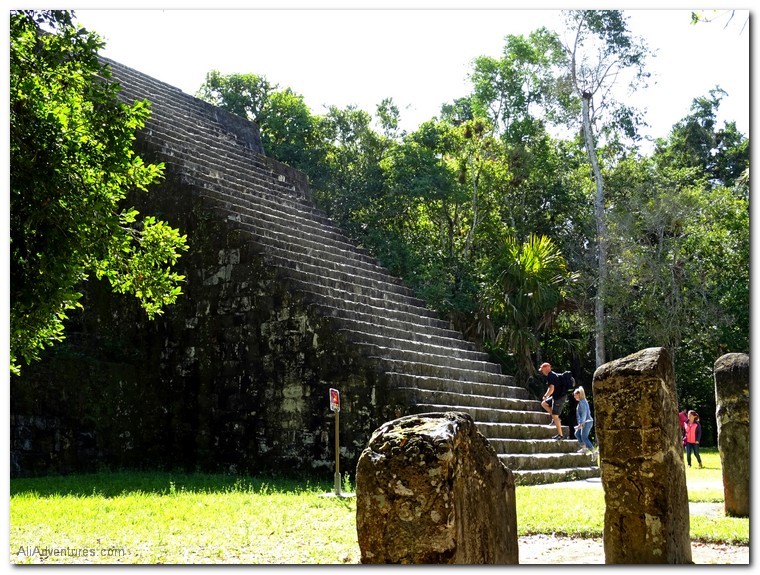 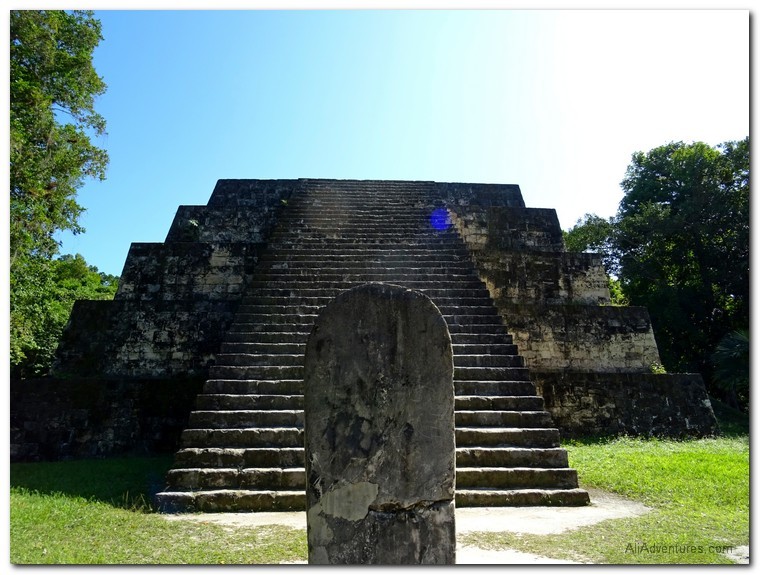 The stairs tended to be rather large, and since the Mayans were short, we asked how they dealt with those huge stairs. Our guide told us they climbed the steps in a zigzag manner because it was easier for short legs. At only 5’1″ (155cm) with disproportionately short legs, I decided to test this out. It helped a little but those steps were still challenging.

Next in the Grand Plaza, we saw the Jaguar Temple and climbed the Masked Temple. It was around this point when our guide told us some interesting stories about the history of Tikal.

He told us about the rulers who controlled the city. One ruler in particular wasn’t even Mayan but came from a tribe in Teotihuacan, which is near present-day Mexico City, where today you can visit famous Aztec ruins. He also told us that the people of Tikal eventually left because the land, which is mainly limestone, isn’t very good for agriculture, and they couldn’t grow enough food.

We were able to climb the Masked Temple, which gave us a view of the plaza and the Jaguar Temple. 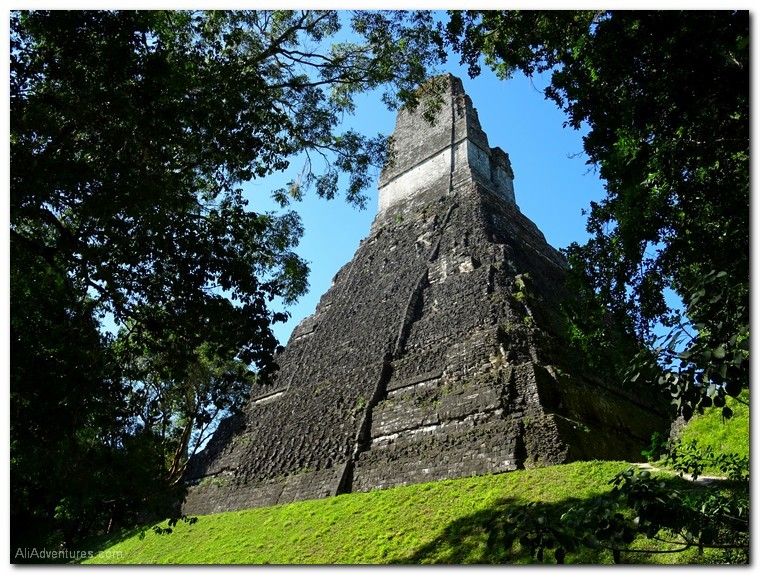 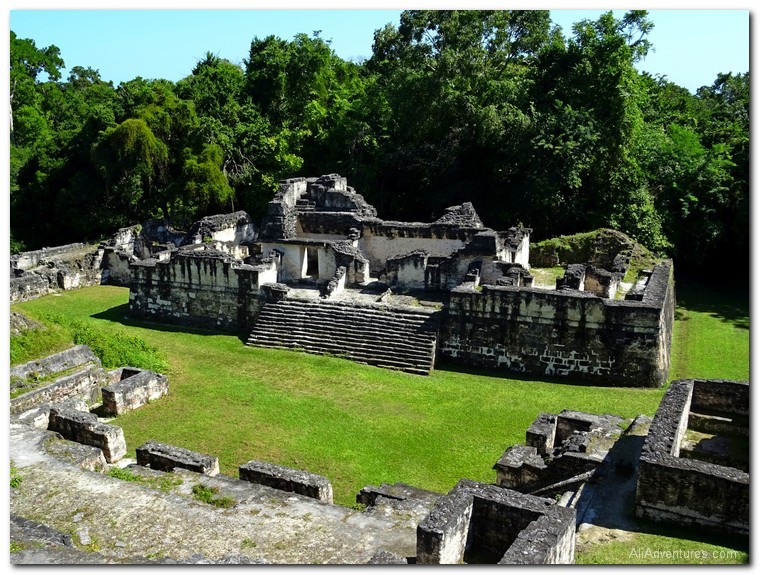 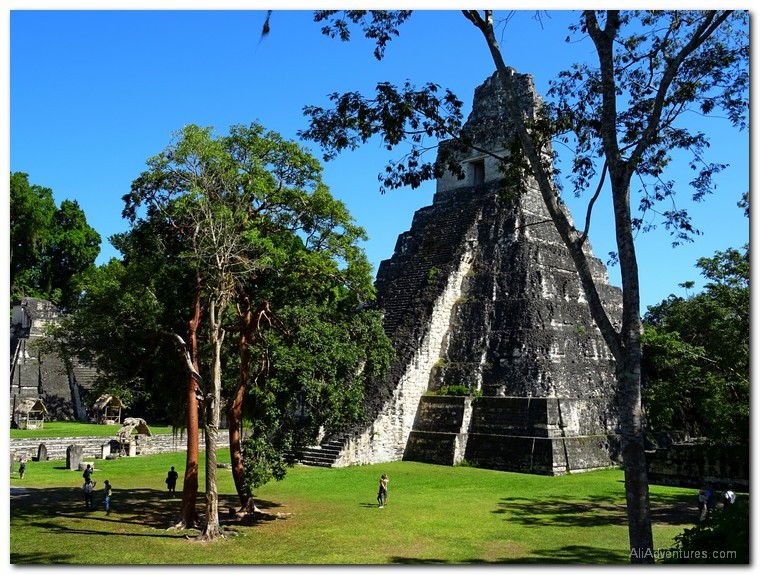 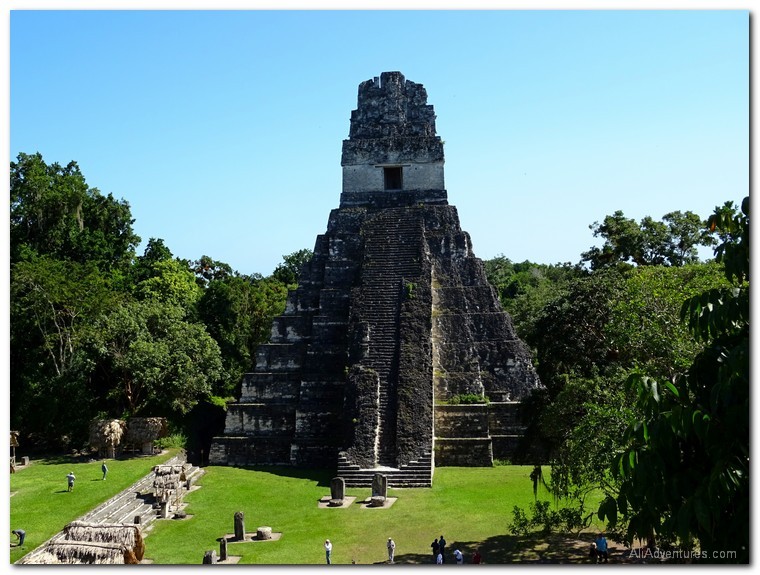 While exploring Tikal, our guide also pointed out that most, but not all, of the temples are Mayan. Because of the ruler from Teotihuacan, there are some temples that are actually Aztec. The Mayan ones had stairs going to the top, but the Aztec ones had flat sections next to the stairs, almost like banisters. 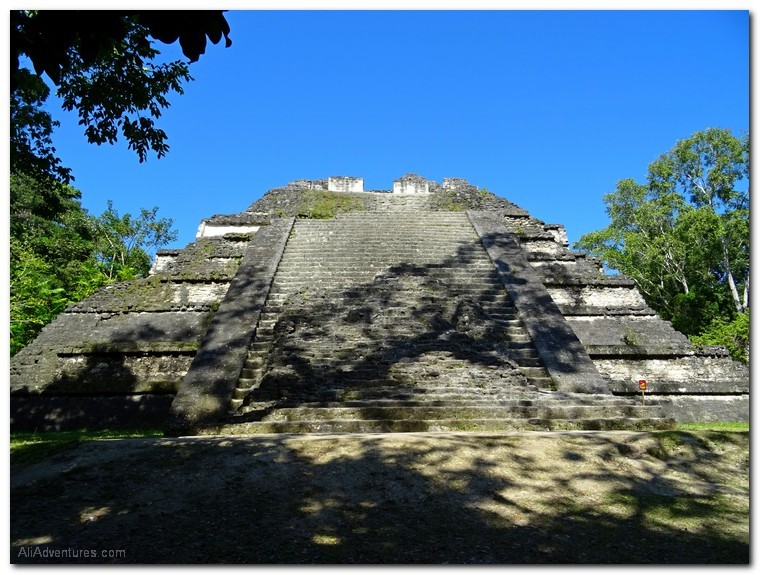 Then we followed our guide to Temple 4, which is the most famous one. It was used briefly in a scene in Star Wars Episode IV. You can’t actually see much of the temple though because it’s still heavily covered in vegetation. We climbed about 200 wooden stairs to reach the top and see the views of the area. 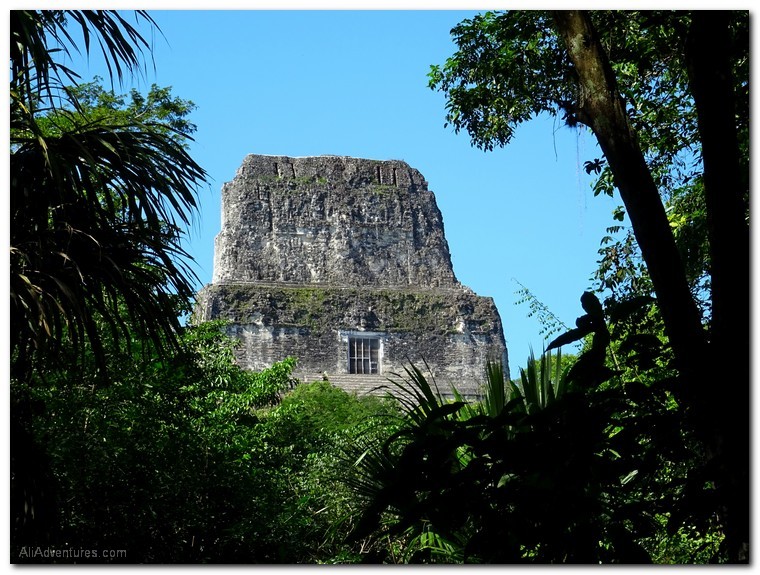 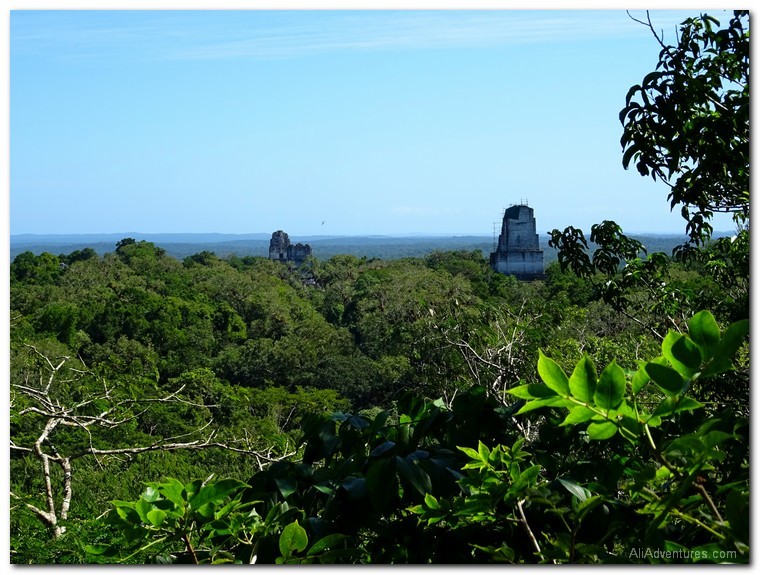 Another interesting temple we saw was Temple 5. Most temples were built facing either east (sunrise, birth) or west (sunset, death) but Temple 5 faces north. This was because it was built in honor of the rain god, and the rain comes from the north here. 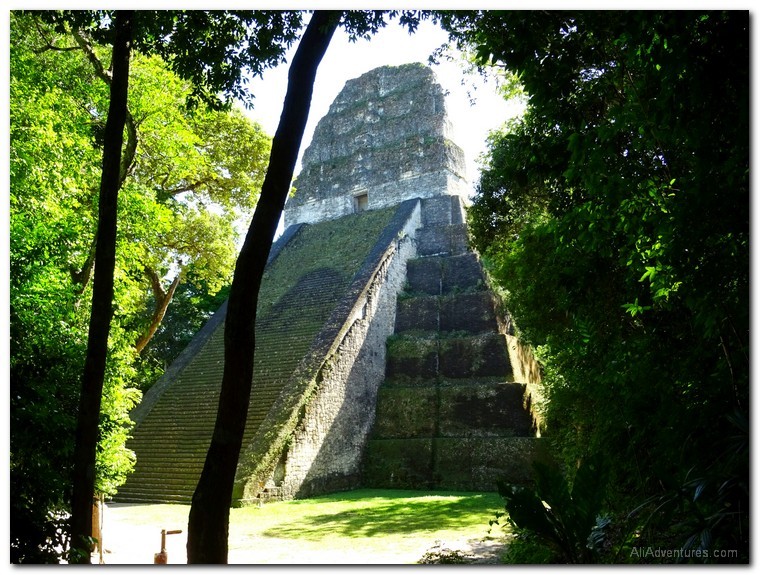 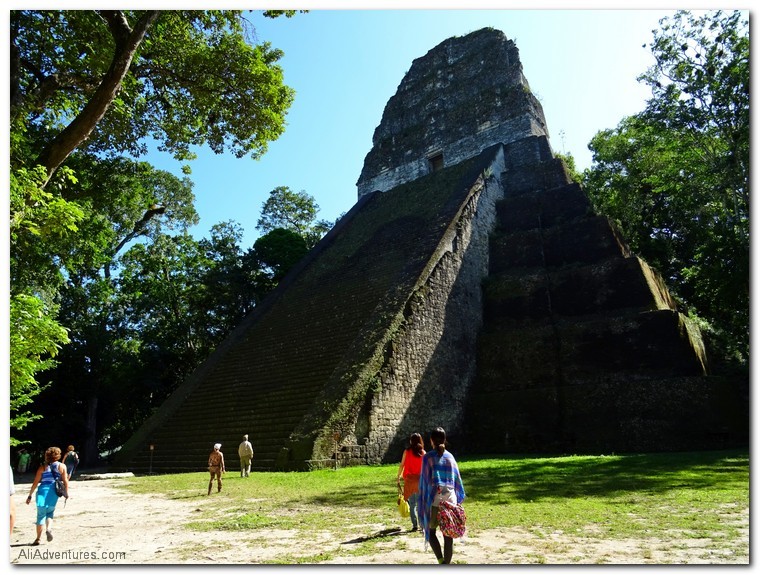 It’s all fun and games until someone gets killed

Temples and pyramids were the bulk of what we saw, but our guide also showed us a field where teams competed in some kind of game in front of the rulers and other members of the community. Teams would come from other parts of the Mayan world, and the Tikal team would travel as well.

But instead of getting a trophy if your team won, one of the players on the winning team would be killed as a sacrifice. The idea was to offer up a good player, which is why the losing team’s players all continued breathing. I’m sure it was an honor, so they played their best, but I think the possibility of death would prevent me from excelling. 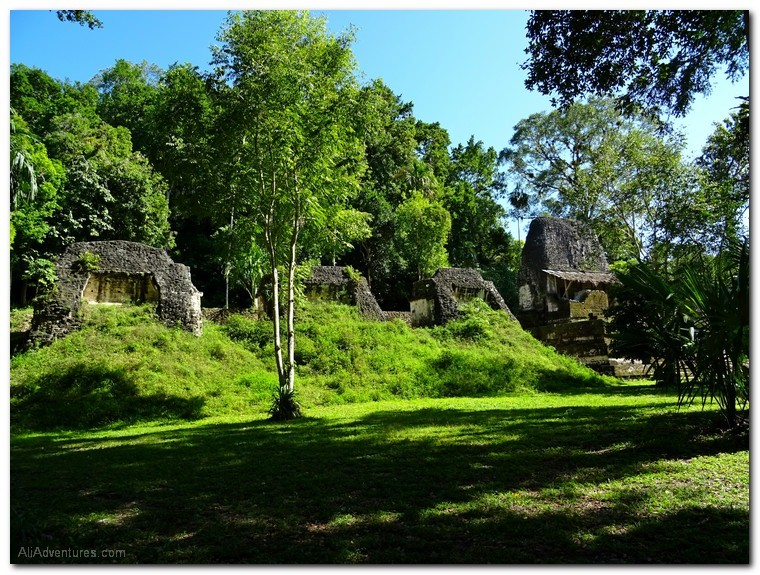 As our tour was wrapping up, our guide saw some toucans that live in the park. Apparently there are three different kinds, and the fact that we got to see all three of them, including the shy smallest ones, was really rare. He was super excited to see them all. They’re pictured here from biggest to smallest. 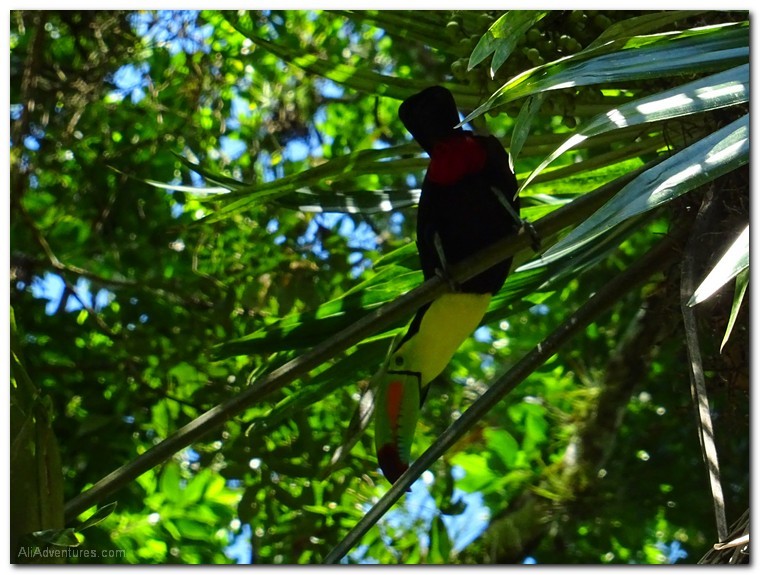 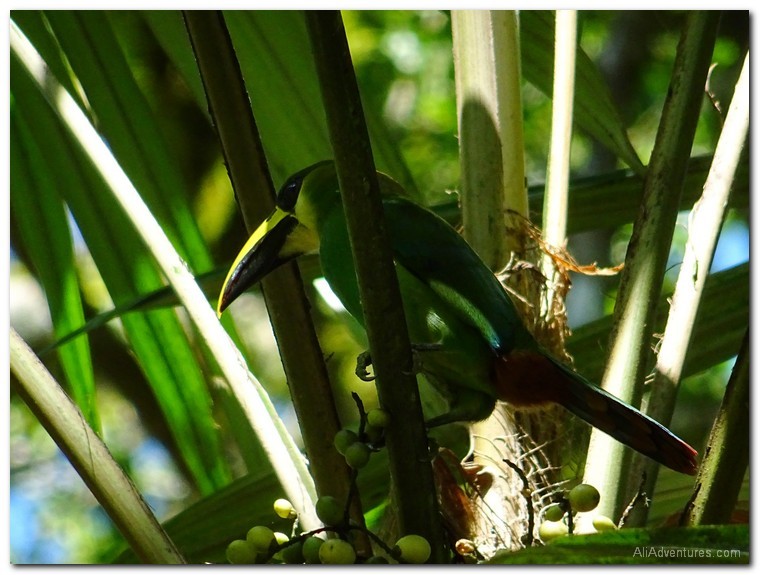 Visiting the Tikal ruins in Guatemala

Most people stay in Flores, which is an hour or so from Tikal, because there are more hotels and guest houses. Near Tikal itself there are some camping options and some expensive places but not much else, and it’s not really near a town with restaurants or anything.

Travel agents are all over Flores. You can book a Tikal tour at any one of them or through most hotels or guesthouses. Our tour picked us up from our hotel at 8am and arrived at the park somewhere between 9:15 and 9:30.

You can pay for the transport only if you want, but I highly recommend paying a little extra for a guided tour. The park looks easy to get lost in (guides have to go through serious training, including survival training, because apparently people really do get lost in there) and it’s really fascinating to hear the history while looking at the ruins. Our tour guide gave info in both English and Spanish. (This is when I realized I could still understand a lot of Spanish, and that my Spanish is still somehow better than my German.)

The tour ended around 1:30 or 2pm, and we had time for lunch at a little restaurant near where our shuttle dropped us off and was leaving from. We left at 3pm and got back to our hotel around 4pm or so.

Per person, the park entrance was GTQ150 (about US$20.50 or 18.50€) and another GTQ150 for the transport and tour guide. Sunrise or sunset tours are more expensive. Plus you have to leave obnoxiously early in the morning to do a sunrise tour.