The Ruins and Travertines of Pamukkale

Our time in Turkey was a wonderful combination of cities and outdoors, history and nature. Pamukkale was a great combination of both. Like most people, we went to see the white travertines, but ruins of an ancient city are also located at the top of the hill. Our hotel was across the street from the bottom entrance, about 50 yards away, but luckily the friendly owner of our hotel (who sold carpets in the Freiburg area for 20 years…small world) drove us to the top so we could walk down instead of up. 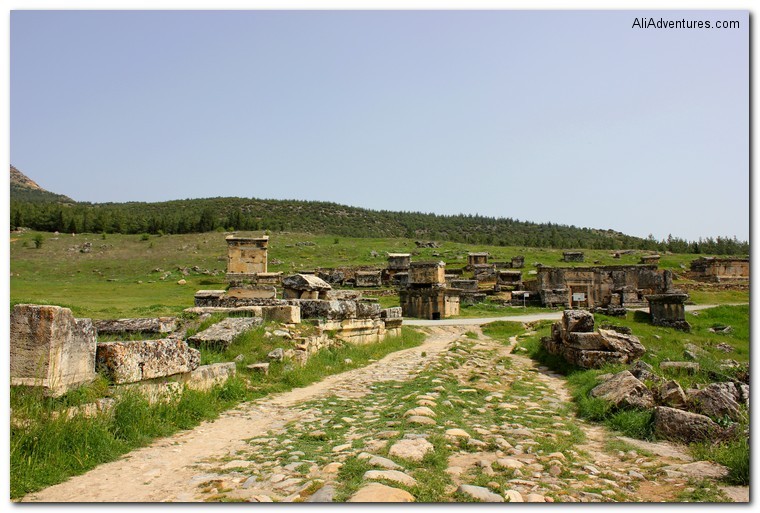 Normally I find ruins fascinating. Ruins are full of history and they really make me think about all the time that has passed. But I think after the strong feelings of amazement I had visiting Ephesus, these ruins never had a chance with me, no matter how impressive they might have been. 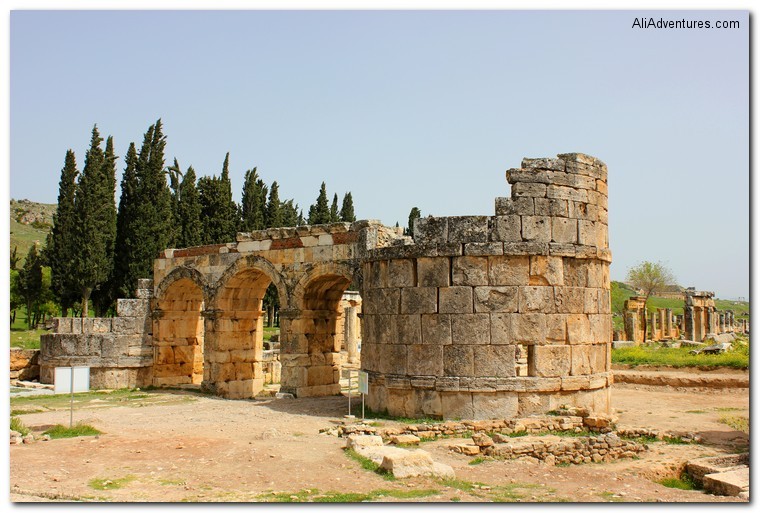 Just inside the Hieropolis city gates, we saw a line of pillars. While this certainly wasn’t an abnormal thing to see, what did surprise us a little was the sign explaining the section. This was the latrine, and just in case you, as the tourist, don’t speak one of the languages used on the sign, they provided a lovely drawing of guys sitting down taking care of business. 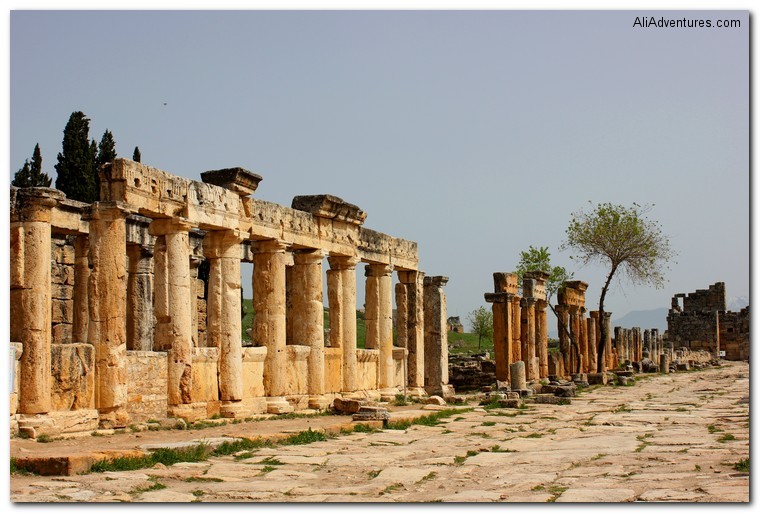 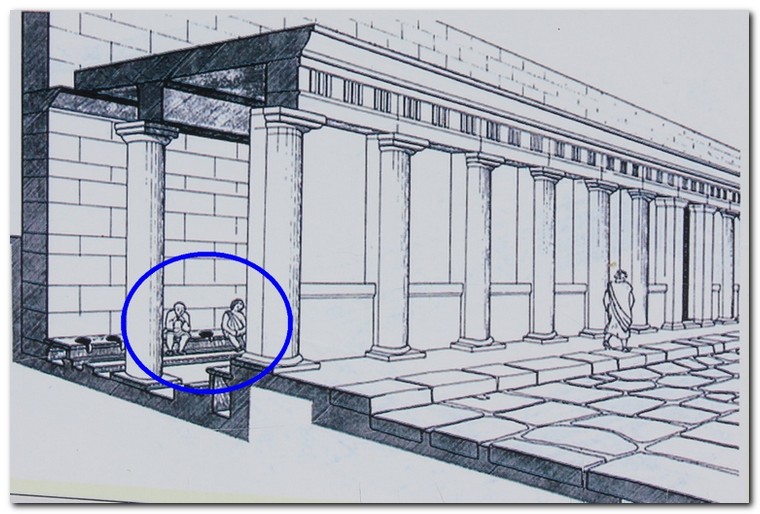 After the latrine, we decided it was time to make our way over to the travertines. Along the way, as promised by the guidebook, was a group (school?) of tadpoles. Not only was it odd that this was even mentioned in the guidebook, but it was just a couple of puddles. 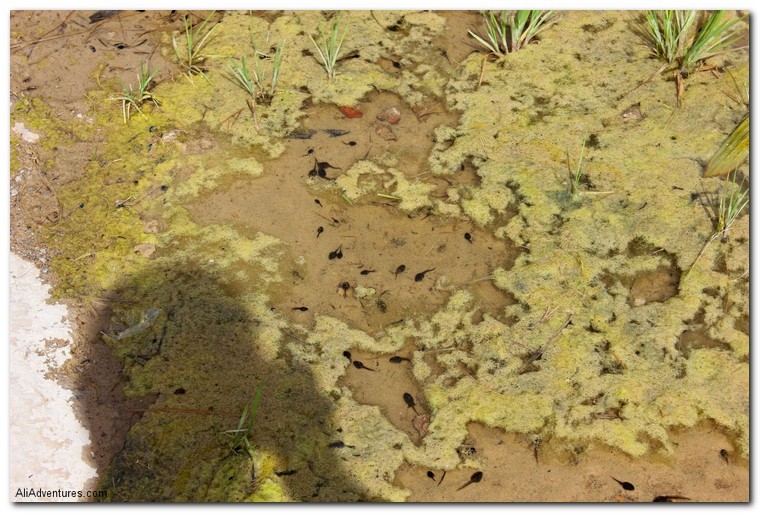 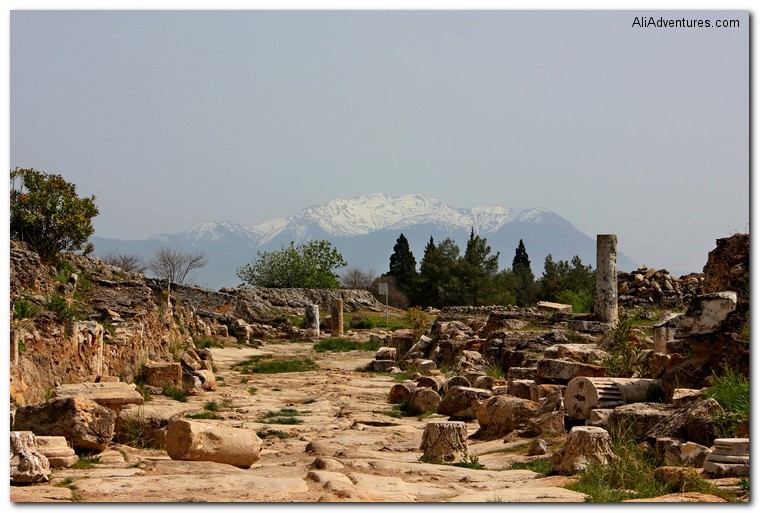 Finally we spotted the unmistakable sparkling white of the travertines. 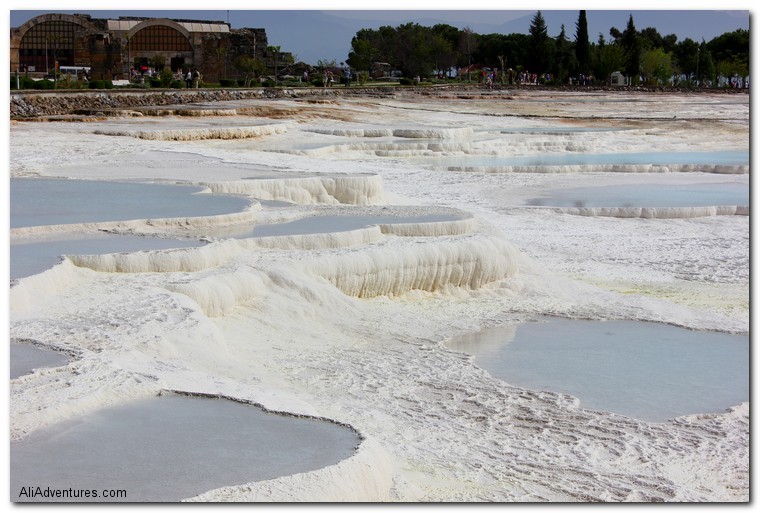 As we looked for a place to sit and take off our shoes (required to not damage the rock) we overheard a tour guide telling his group what time to meet at the bus. I looked at my watch and realized he gave them just 45 minutes to see the travertines and then make it all the way back through the ruins. Andy and I spent three and a half hours total exploring the ruins and the travertines, so this is one our reasons not to take a tour. 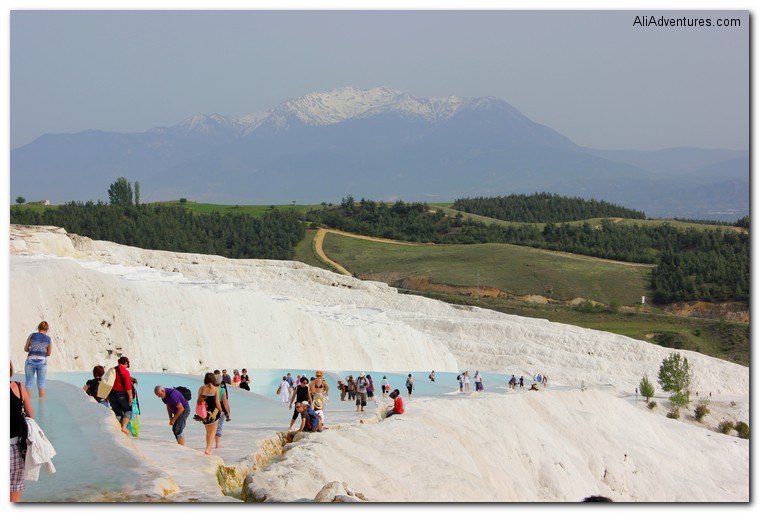 The top few sets of pools were rather crowded since this was all the tour groups had time for. As soon as we got past the first few sets, there were considerably fewer people, and we often had an entire section to ourselves. 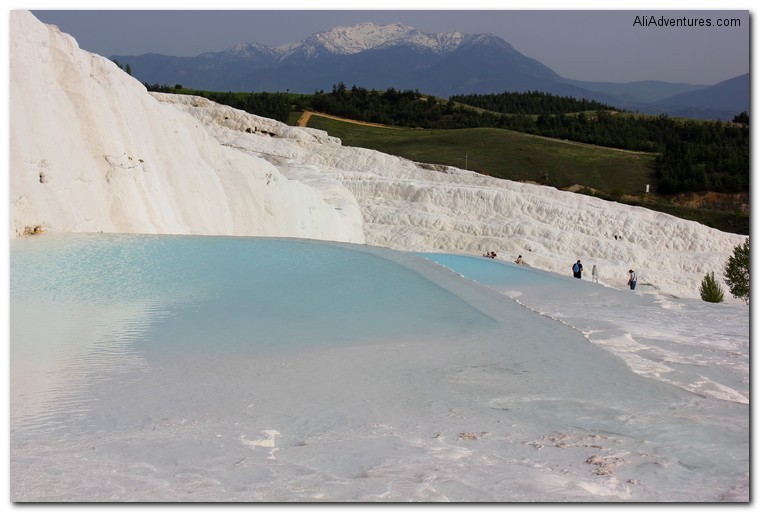 The water deposits calcium on the cliff, which hardens over time resulting in this beautiful white wonder. Because of how many people walk through the top two pools, the calcium wears away quickly, doesn’t have as much time to solidify on the cliff, and is much more slippery than the pools below. 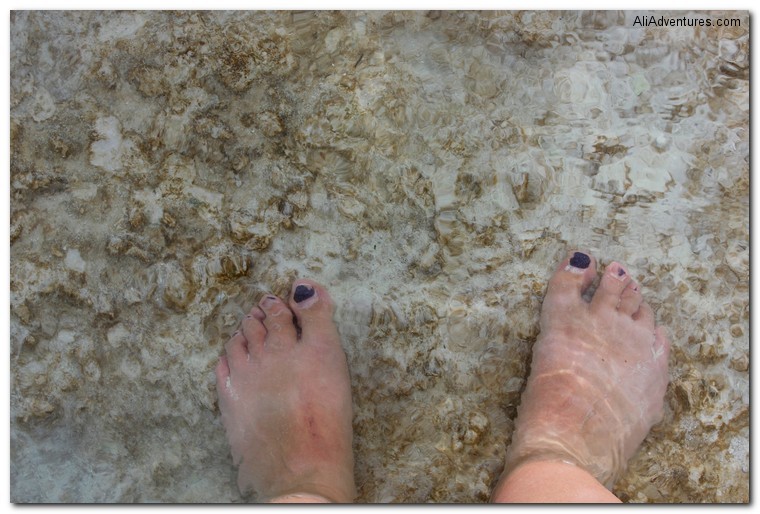 We took our time walking down through the travertines, not only so we could enjoy where we were, but because walking on solidified calcium isn’t the most comfortable activity for your bare feet. Although it did leave my feet feeling softer then they ever have from any pedicure. 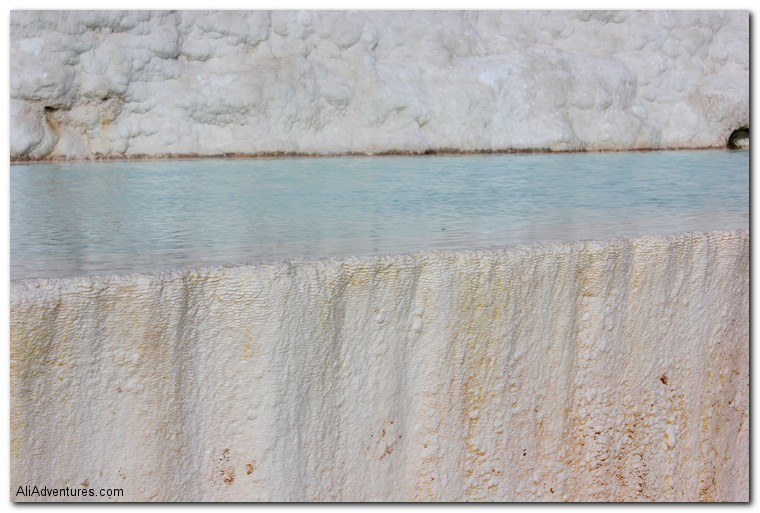 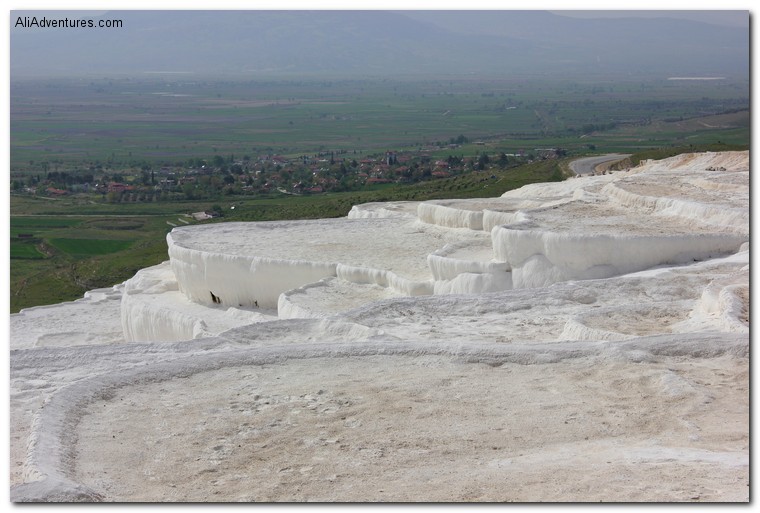 Damage to the Travertines

At some point in the not too distant past, over-development near the travertines diverted too much water, causing the travertines to dry up. Luckily they are now in the process of reversing this problem, and the travertines once again have water flowing through them. We could see tubes diverting water to certain areas to make sure the greatest area possible gets revitalized. 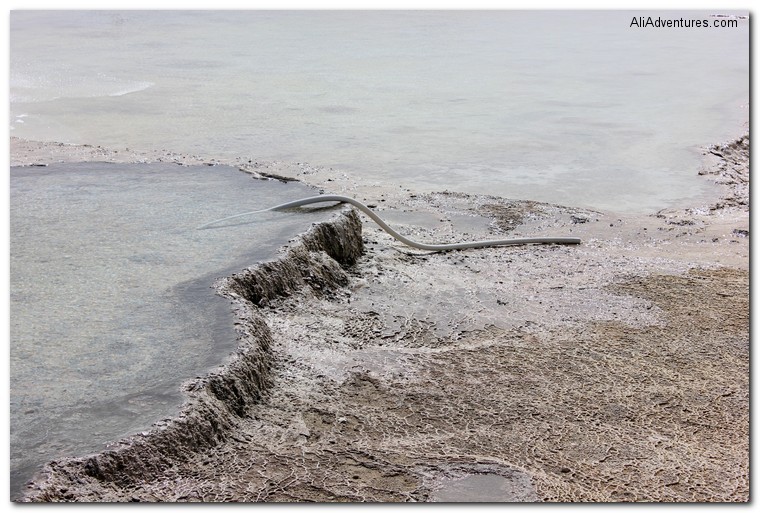 Even though there were very obvious signs of repair at this natural beauty, I still saw something that horrified me. Three people decided they wanted a souvenir from Pamukkale, but instead of buying a postcard or a magnet, they each filled a water bottle with water and calcium sediment from the travertines. I’m sure the amount they took isn’t huge in the grand scheme of things, but what if a dozen people did this every day? The locals are working so hard to repair the damage, and these tourists were chipping away at the progress. And really, what are they planning on doing with those bottles when they get home, if they even survive the return trip? If you go, please don’t do this. 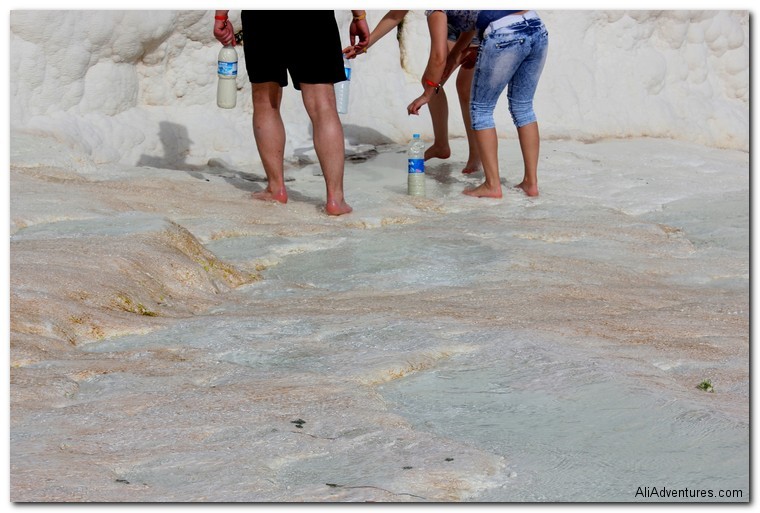 Andy and I paid 25 Turkish Lira each (US$13.80 or 10.70€) for a bus from Selcuk to Pamukkale, which took three and a half hours to Denizli followed by 30 minutes on a travel agent’s minivan. We didn’t realize he was a travel agent until he stopped in front of his agency and tried to make all of us go in, supposedly so he could show us the town on a map. We all refused, and he finally got back in, very obviously angry, and drove us to our hotels. 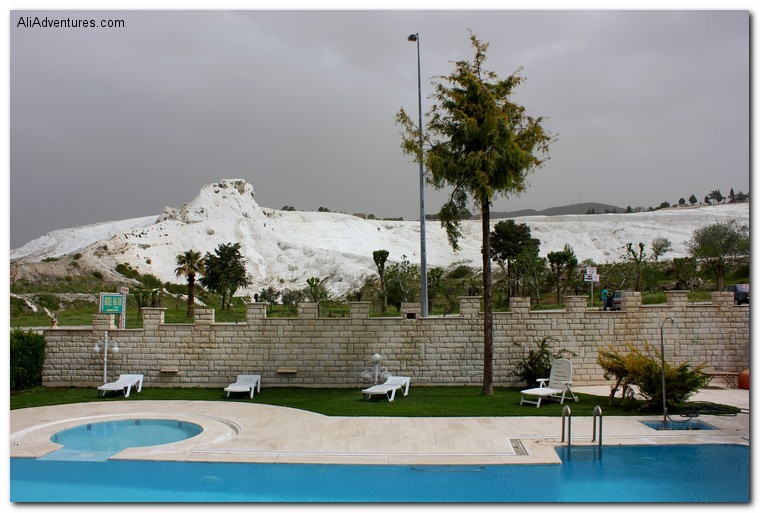 The Denizli Airport is the closest airport to Pamukkale, and since it’s such a small airport, the shuttles coincide with the flights. We paid 25 Turkish Lira each, and the van picked us up right at our hotel. The van stopped at some random spot on the side of the road where we waited for about 20 minutes until a Turkish Airlines van showed up to get us. 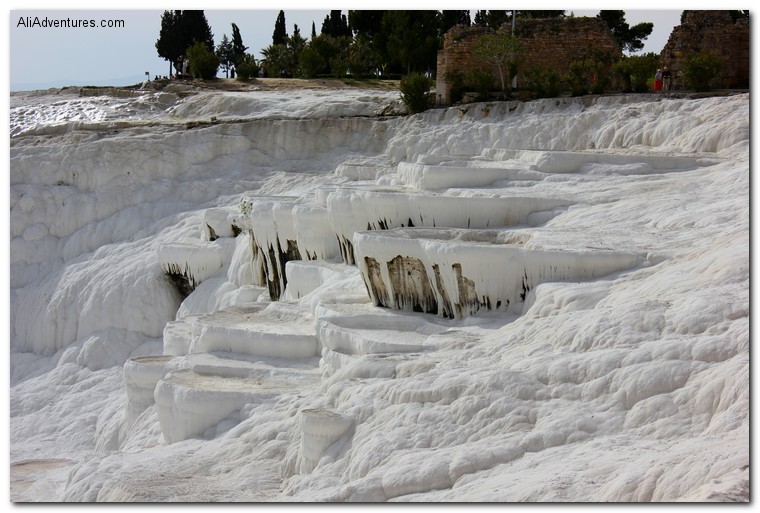 Pamukkale so you can easily walk back to your hotel or a restaurant.

Sign Up
Sometimes I Fake It Feeling At Home In Barcelona