Singapore is a convenient place to start a trip to Southeast Asia. It has one of the biggest and busiest international airports in the region, which is why I ended up flying there to start my round the world trip a few years ago. It’s also why Andy and I ended up starting and ending our Southeast Asia trip there. I’ve now been there four times, never more than a few days at a time, and the last two visits were both on our recent trip.

Our flight landed in Singapore in the evening, leaving us just enough time to find our hotel and go get dinner before crashing into bed from exhaustion. But the next day we took the metro down to the waterfront and wandered around. It was a section of the city I hadn’t seen before since I stayed near Little India on my previous two visits. 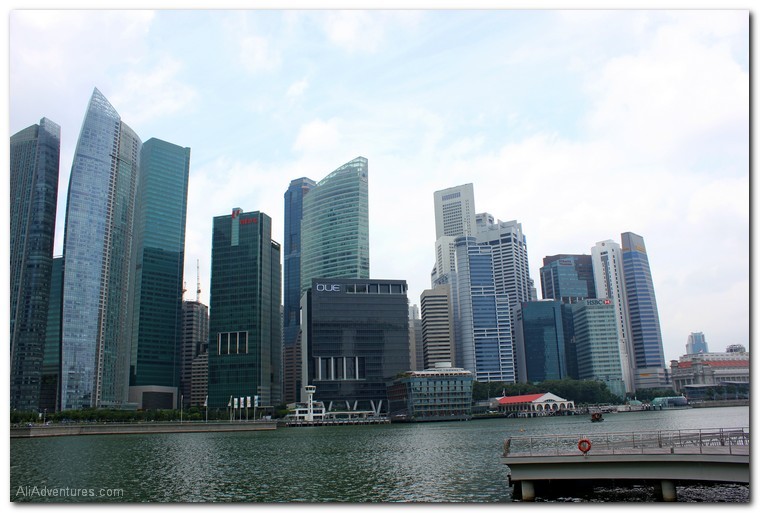 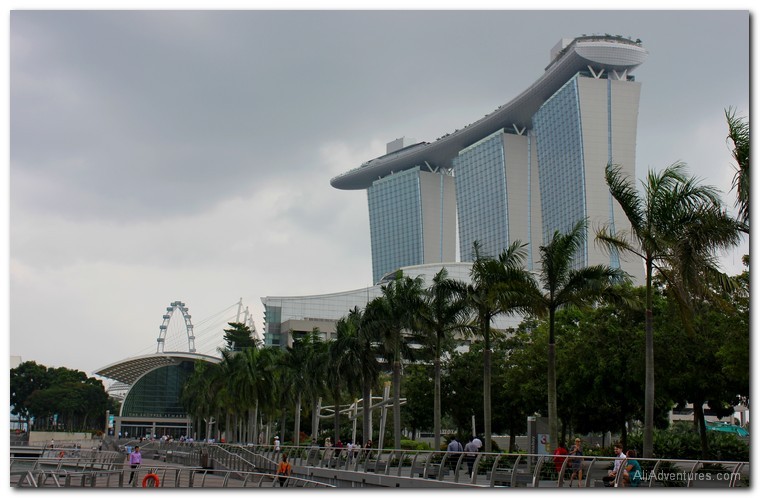 The building in the picture above is the Marina Bay Sands hotel, which has the world’s highest infinity pool on top of it. (Check out my friend Jaime’s post about getting to go up there and swim in the pool.) Right in front of the hotel is a mall with a whirlpool fountain we watched for awhile. Once we went inside we found out that the fountain drains into a fake river type pool with bridges and gondolas. A little over the top but still interesting. 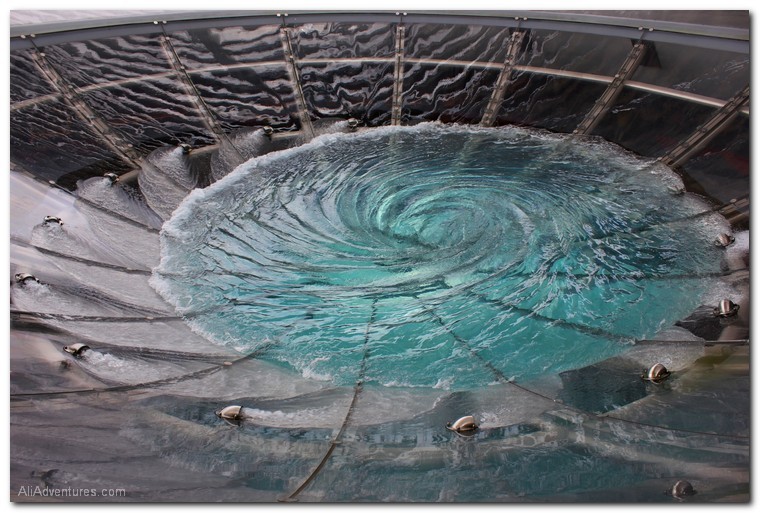 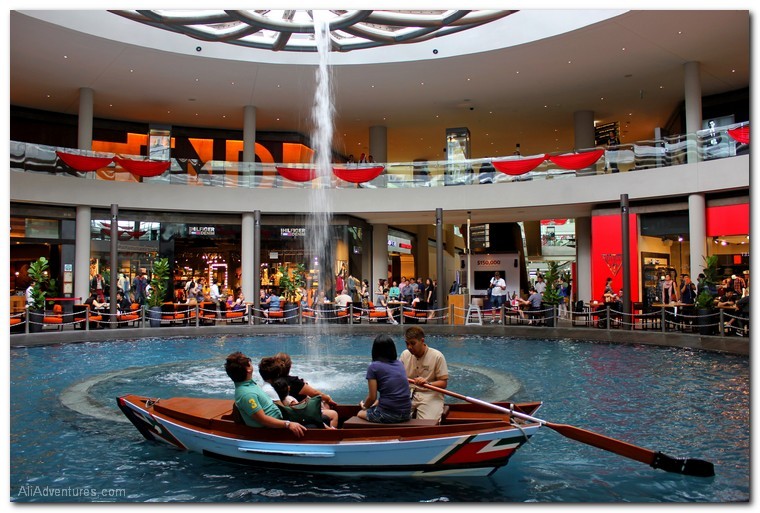 Eventually we went back outside and continued walking. We could see the Singapore Flyer while walking across the Helix Bridge, among other things. 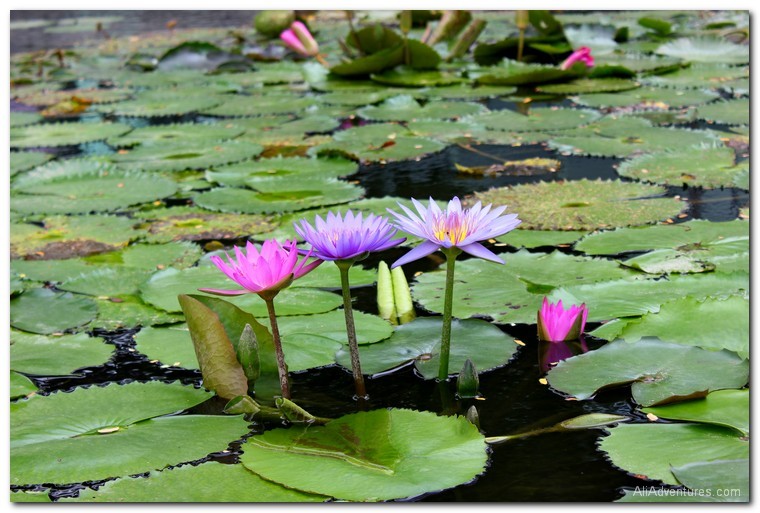 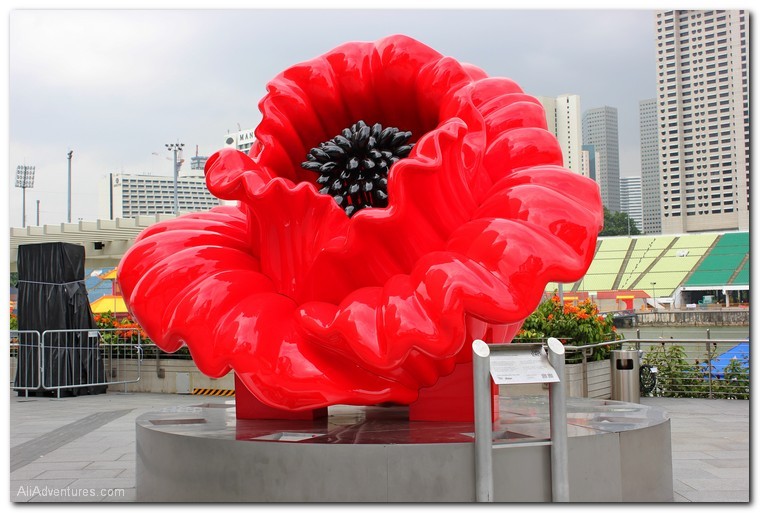 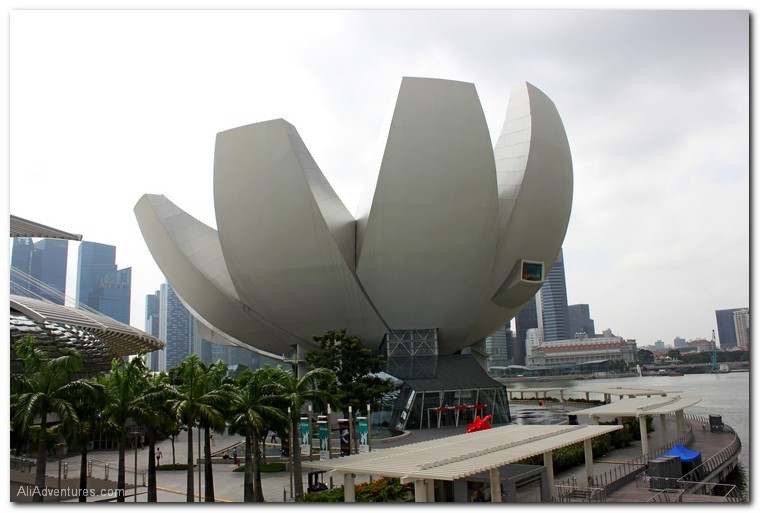 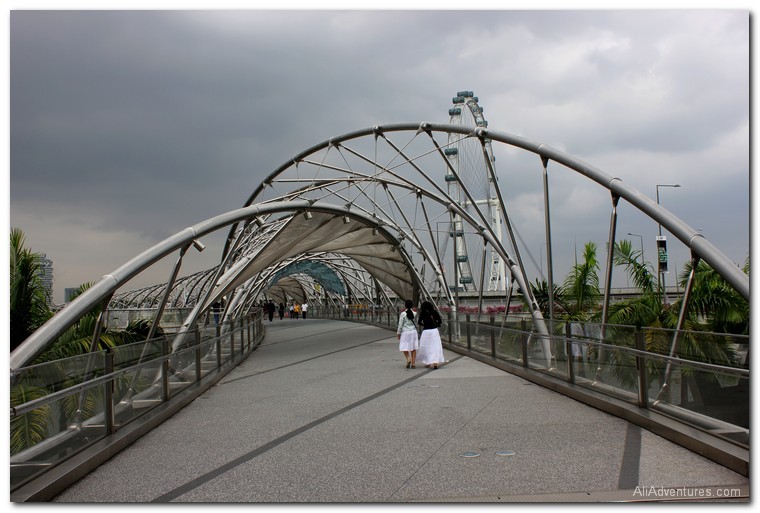 On my second visit to Singapore, I went to the Night Safari, which is a nighttime zoo where most of the animals are not in cages. You take a trolley ride through different sections where you can see a variety of animals almost as if they were in the wild. There are also several paths you can walk through and see other animals, some that are in cages, some that aren’t.

It’s really interesting. I’m not a fan of zoos, but I really enjoy this one. Andy actually does enjoy zoos, so we went while we were there at the beginning of our trip. Unfortunately flash photography isn’t allowed, so I don’t have any pictures to show you from that night.

We had to be back in Singapore at the end of our trip to catch our flight home, so this time we decided to stay in Chinatown. We ended up across the street from Clarke Quay, and even though we opted not to take a boat ride, we did watch the boats go up and down the river while we explored the area. 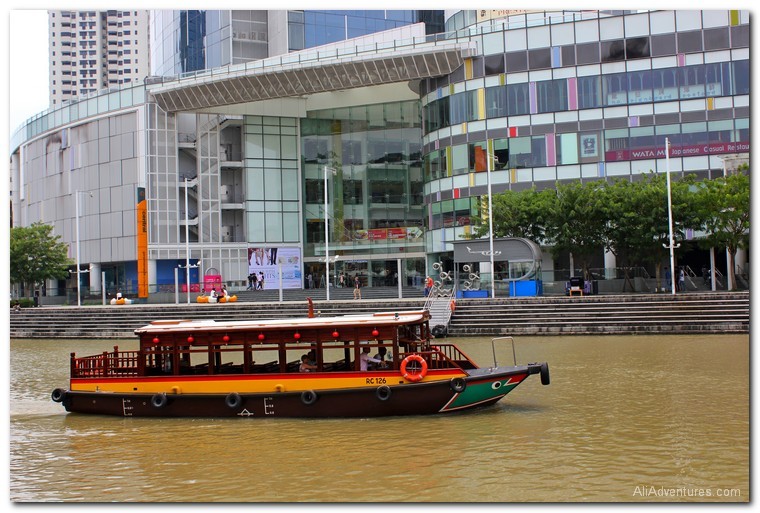 It was only about a month after Chinese New Year, so there were still lots of decorations up (maybe they stay up all the time?) including horses everywhere since it is now the year of the horse. 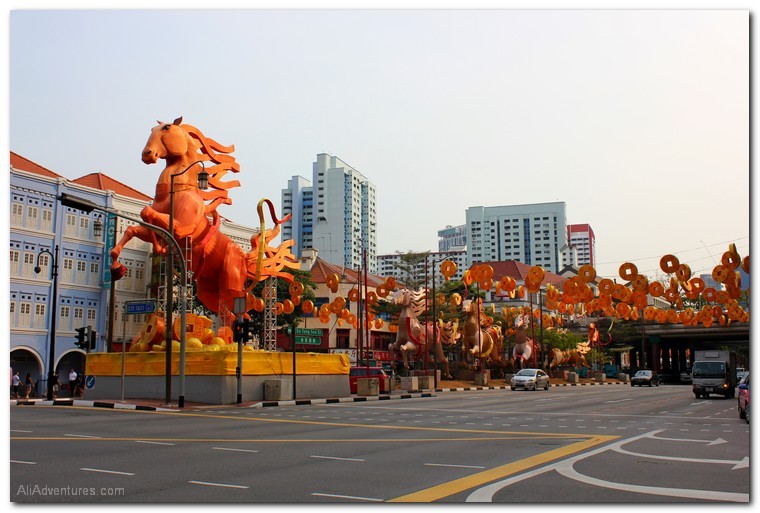 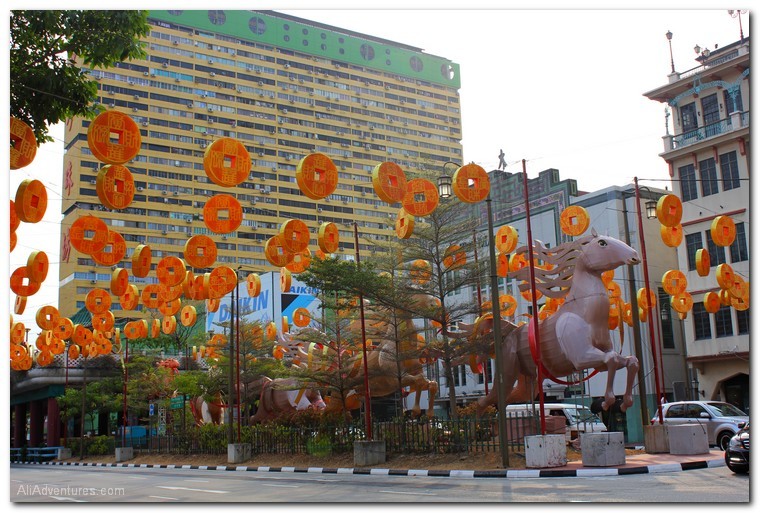 As we wandered away from the main road and through the smaller side streets of Chinatown, I was a little disappointed. The streets were all lined with souvenir shops. It was basically one big shopping district filled with cheap trinkets. We saw one temple, though according to a map there were several more scattered around. The only part that seemed authentic was when Andy and I sat down to get out of the sun, and there was a group of old Chinese men sitting at little cement tables playing some kind of games. I’m sure there are better parts of Chinatown if you have more time to find them. 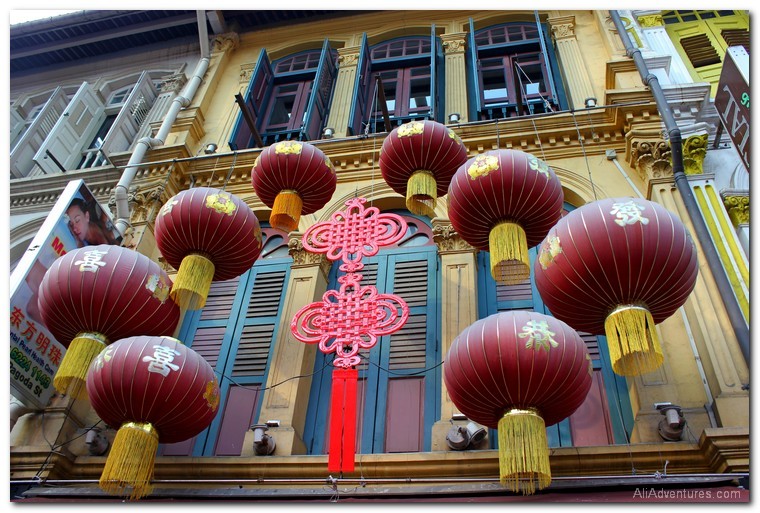 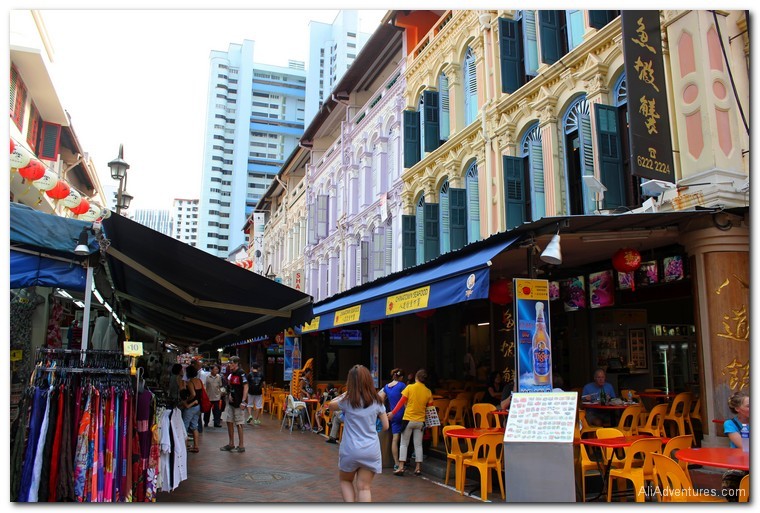 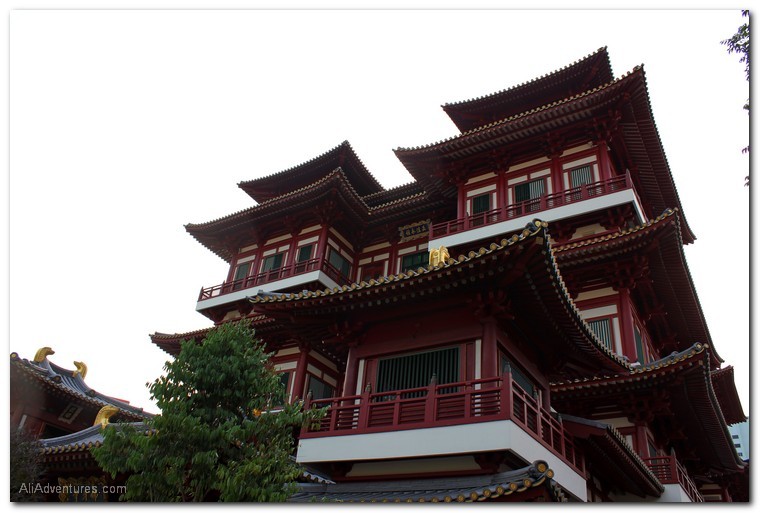 Andy and I only spent about four days total in Singapore between the ends of our trip. It’s a part of Southeast Asia that’s completely different from the rest of the region, which probably made it a good starting point. I think this also helped us catch our breath at the end of our trip since we were a bit burned out and needed some modern comforts. Its modern yet exotic vibe made it a great place to bookend our seven weeks in Southeast Asia.