Andy and I are slowly working our way through as many Polish cities as possible. I can’t even really articulate why it is that we love Poland so much, but we both feel strongly that it’s a wonderful country. So next on our list was the city of Wrocław, located in southwestern Poland. Here’s how we spent our time in Wrocław.

Despite being a less popular than Krakow or Gdansk, Wrocław’s old town was packed with people. There was some kind of spring festival going on, so that added to it. Like most Polish cities we’ve been to, the main square had buildings in the center rather than a big open square like you might see in Spain. Eventually we discovered this one was more than just a few buildings in the center, it was big enough to have a set of small streets with almost hidden shops and restaurants.

Polish architecture is pretty to look at, and we did lots of wandering around and admiring the scenery. 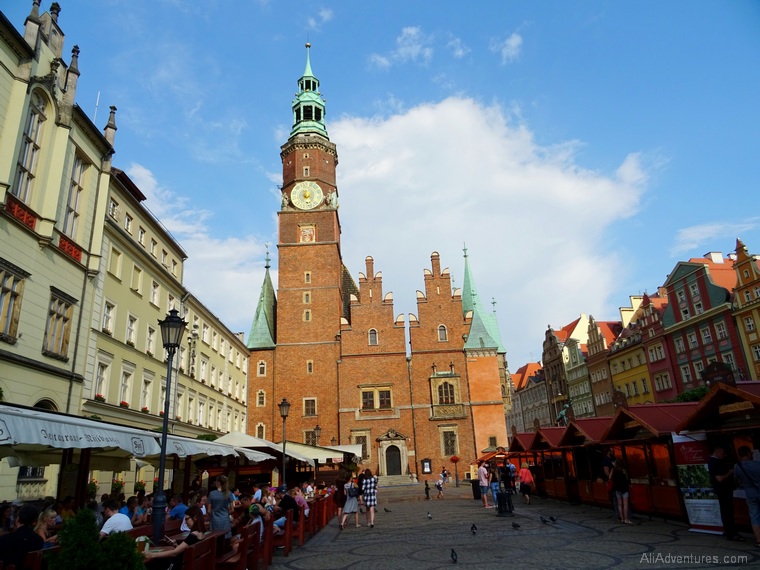 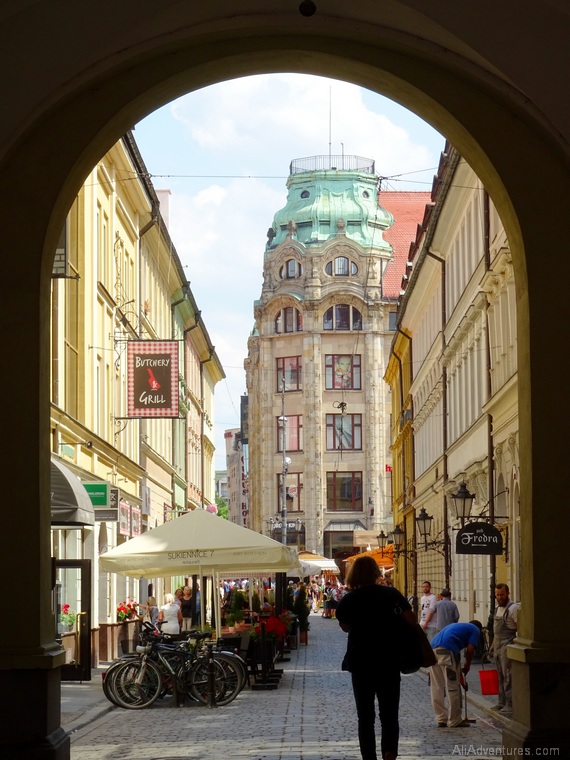 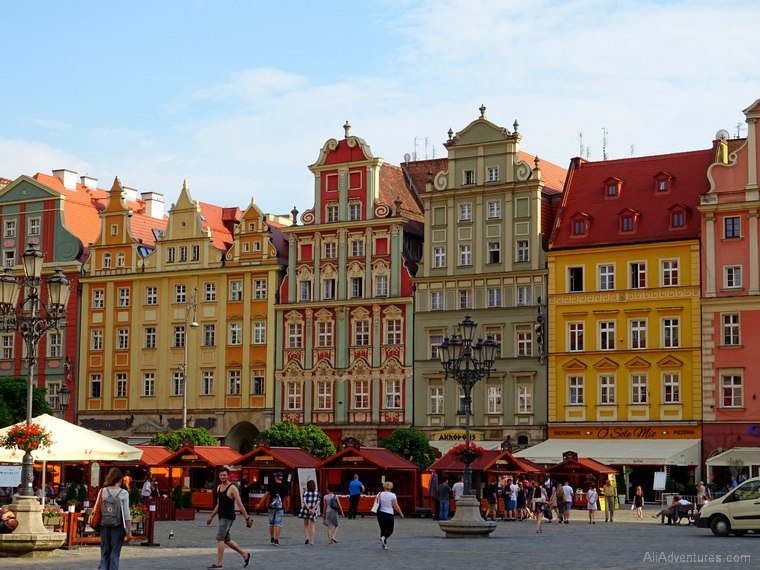 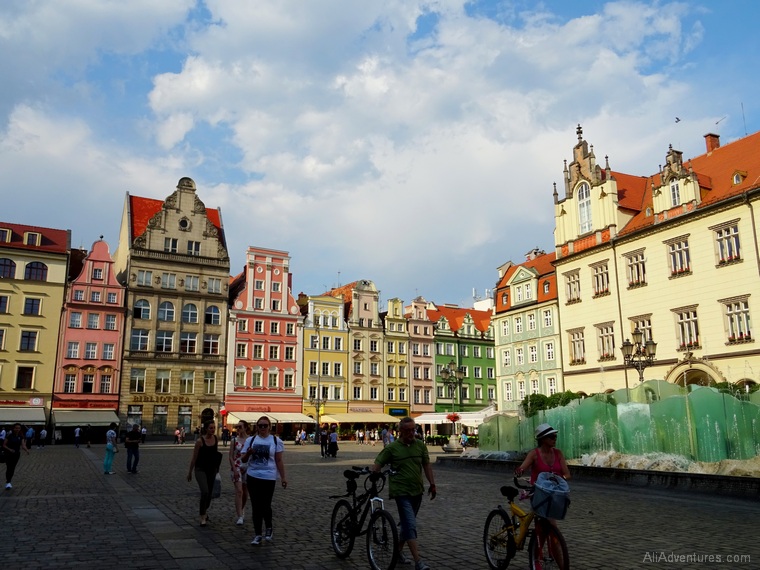 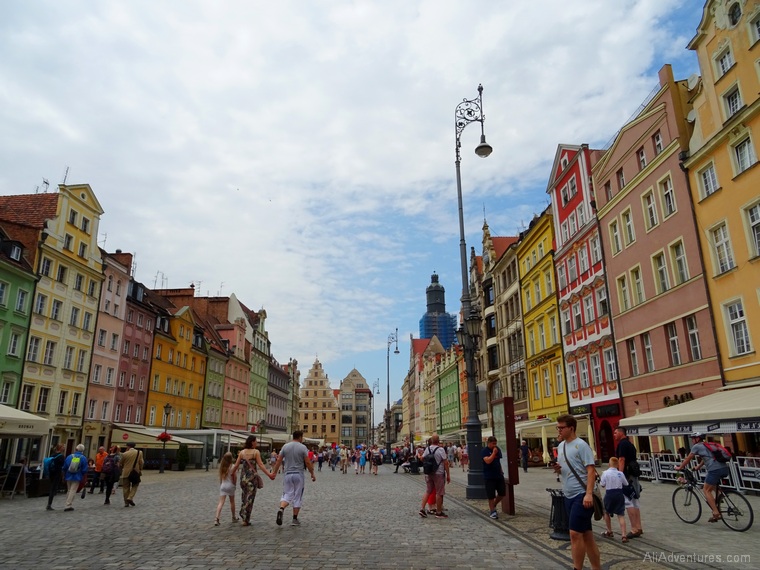 The dwarfs of Wrocław

Wrocław is known for its dwarfs. They are small statues, about a foot tall, scattered all around the city. The first ones were created to commemorate an anti-communist movement, and their charm continues to spread. I’ve seen it noted that there are 165, but some say even as many as 350. We didn’t go out of our way to find any specific ones, but we did see a handful. Some of the dwarfs we saw tied in with the building they stood in front of, like a professor in front of the university and a sleeping dwarf in front of a hotel. 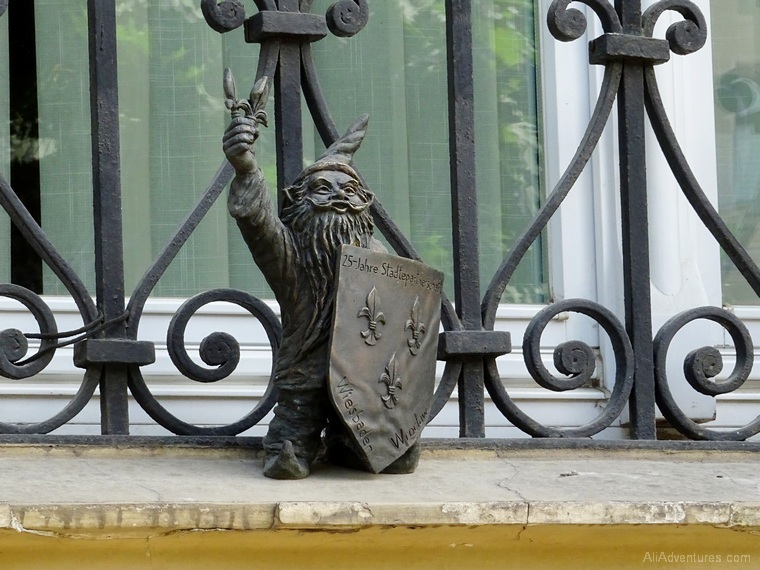 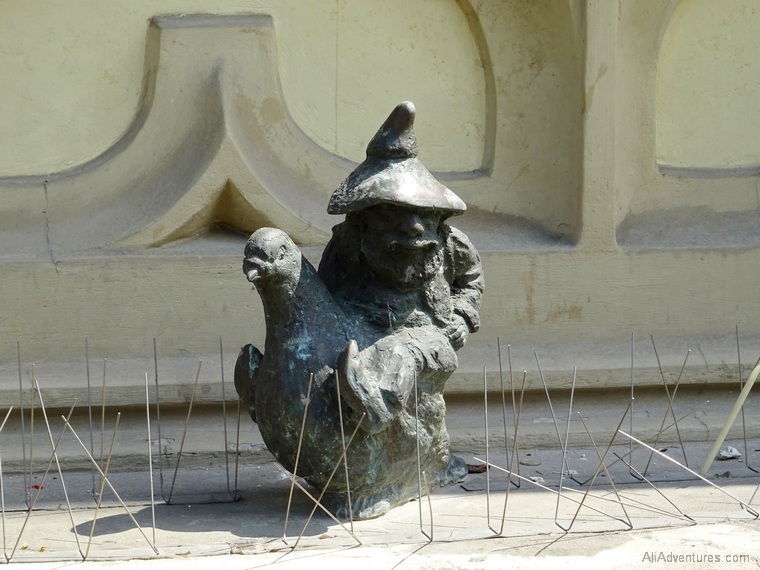 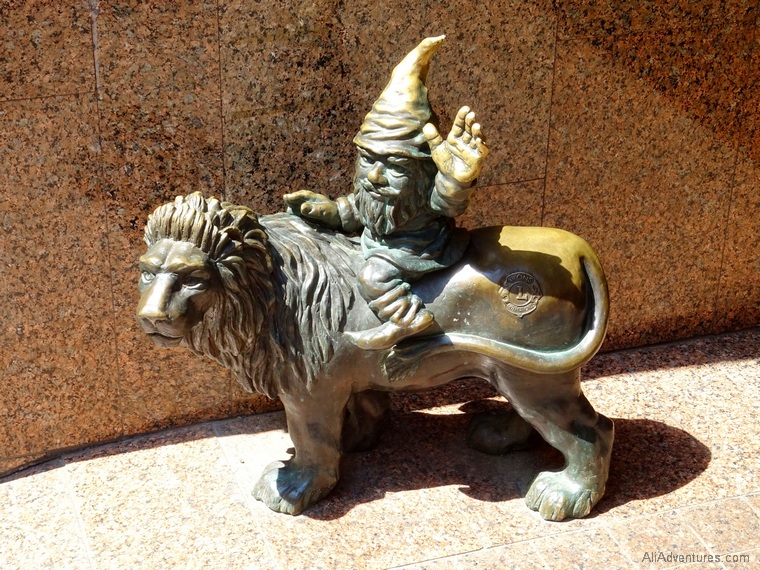 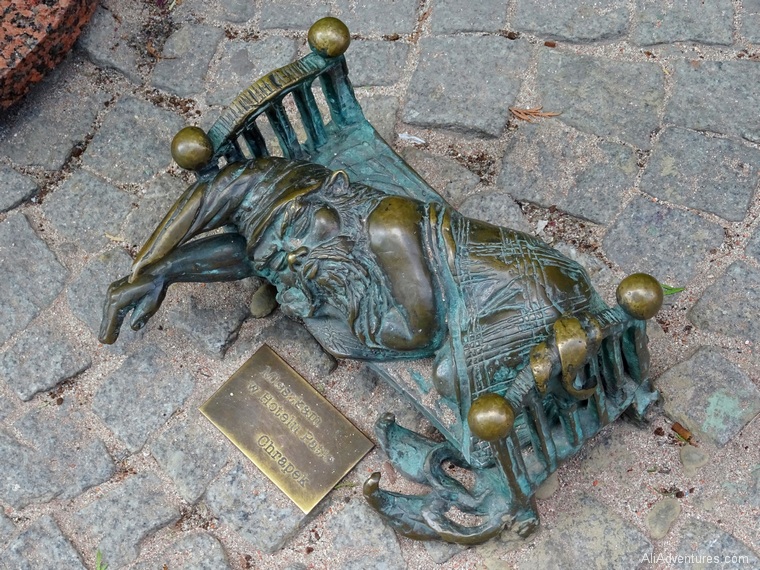 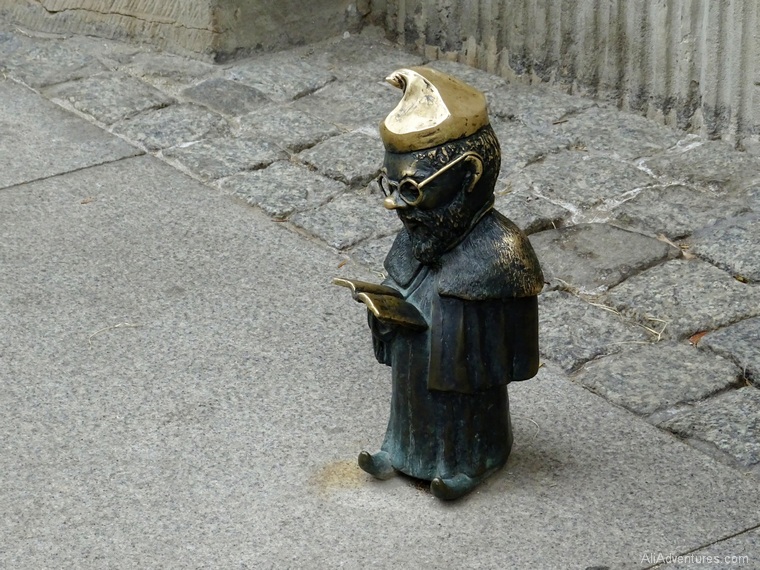 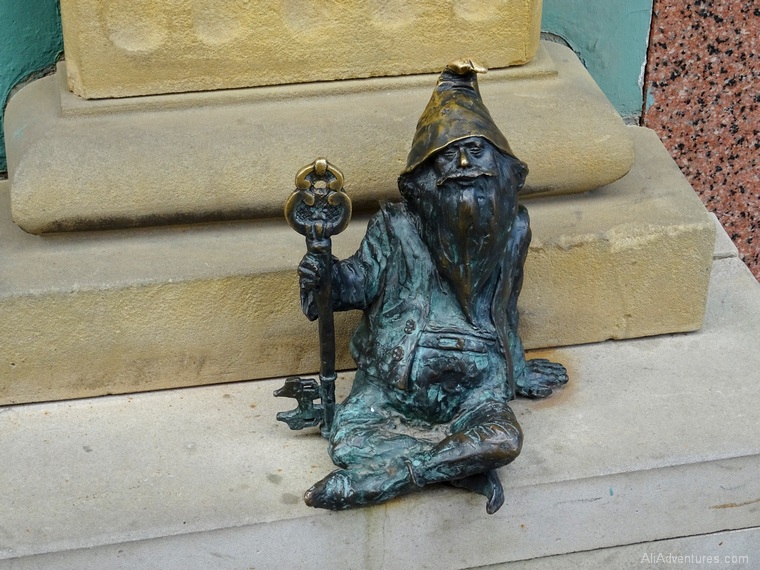 A short tram ride out of the old town is the Multimedia Fountain. It sits in a park, and the fountain dances around throughout the day and night. But the real show is on the hour when it’s more of a choreographed performance with music. Apparently there are lights at night, but we visited during the day. It was short, but definitely impressive. 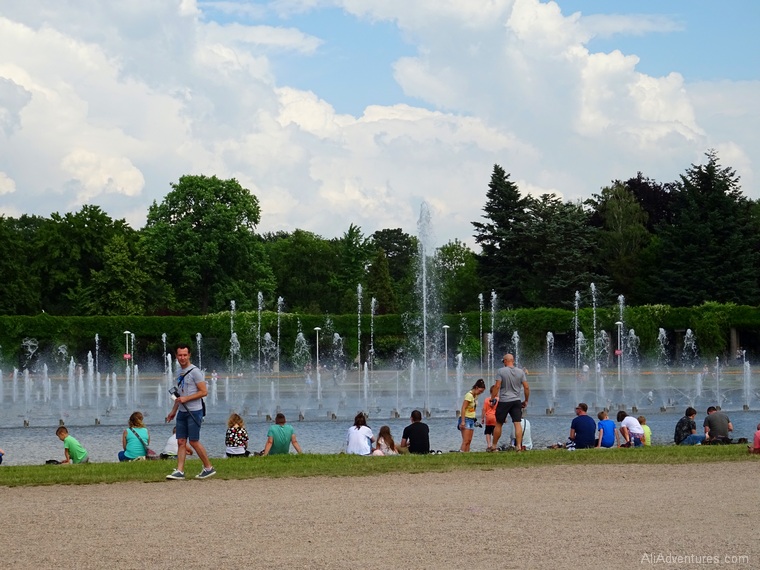 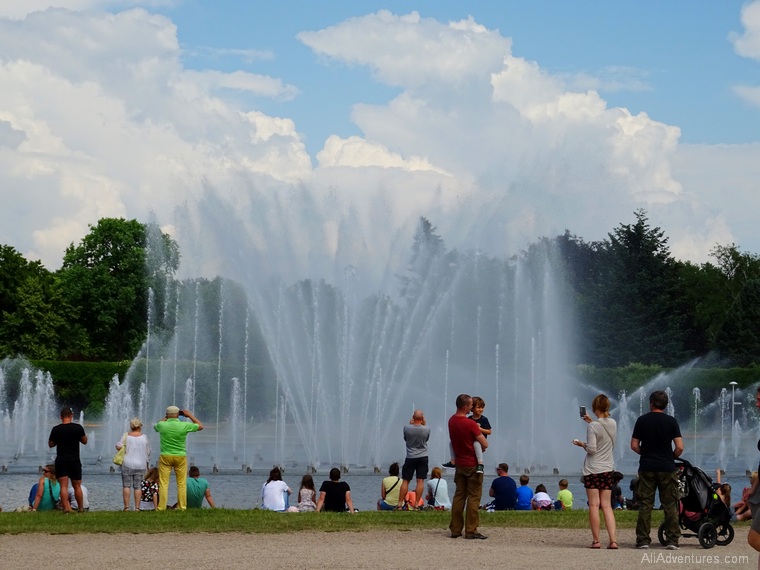 For views of Wrocław from above, we did some searches and found a few options, including a modern building a little ways outside the old town and a couple of churches. Ultimately we decided it was way too hot to climb the church towers, so we decided on the modern building, even if it wasn’t right in the center.

But then we saw people at the top of a building in the university area. This was on the list I found, but we dismissed it for not being tall enough. Seeing it in front of us though, we decided this looked a lot better than some office building, so in we went. It was the Museum of the University of Wrocław, and the cheapest ticket we could buy included the Mathematical Tower and one other section of the museum. 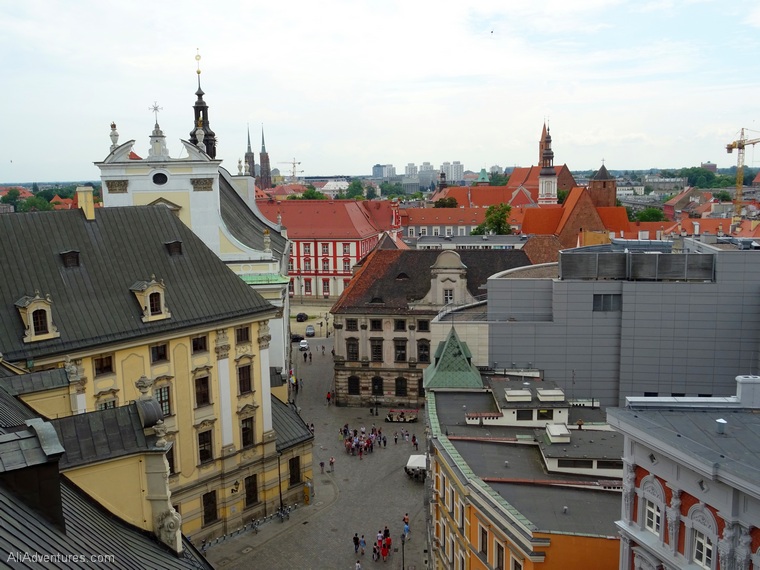 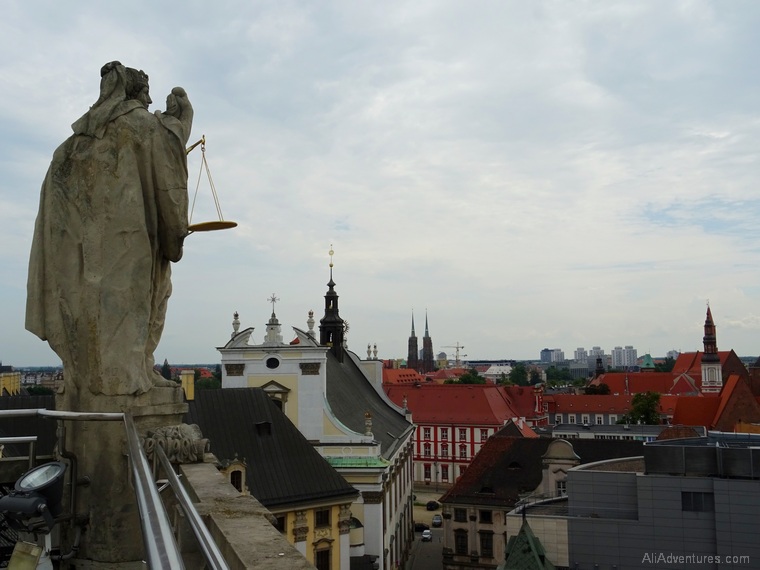 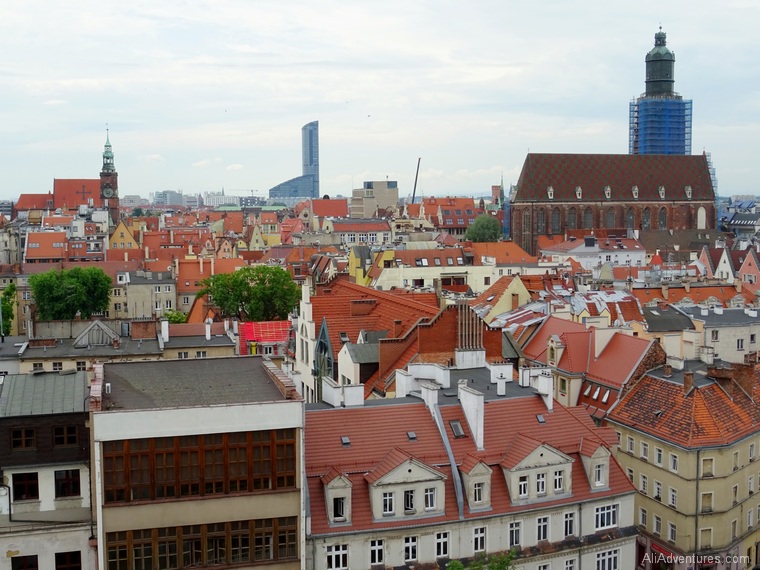 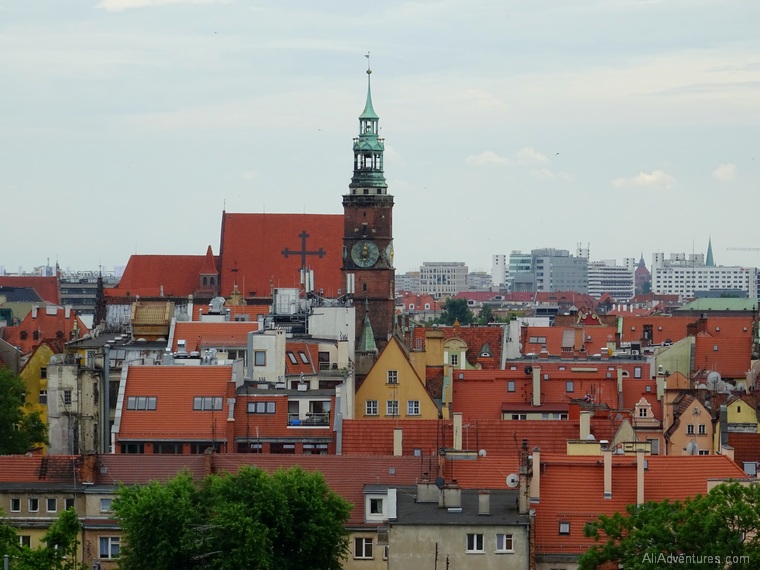 Where to eat in Wrocław

Andy and I have really fallen in love with milk bars during our trips to Poland. They are usually cafeteria style restaurants serving simple, homemade food at low prices. The food is usually really good, and it’s an easy way to not overeat. We found a few to try in Wrocław but ended up at the same great place called Mishmash for lunch every day. We each filled a plate with sausage, chicken, sides, and other items, plus either a water or a soda each, and it cost us about 7 euros total.

Another place we went to several times was Motyla Nogaaa, a gastro pub located in a former prison, though you probably wouldn’t know it by looking at it now. They had a small menu with burgers, fish and chips, a few salads, and some other interesting items. We ate there a few times, but we also went in just for drinks a few times. 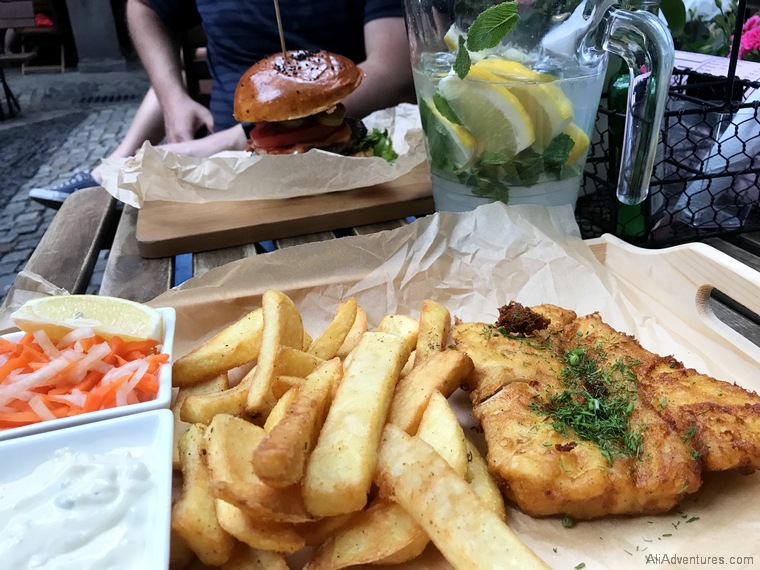 Despite our love for Polish food, we didn’t end up eating a lot of it while in Wrocław. If you happen to be in the mood for some cheap Thai food or you just need a change from Polish food, check out Pha Tha Thai. We ate there a few times and had several tasty meals, and they spoke enough English to understand my request for no egg.

For breakfast one day, we went to Central Cafe a little outside the old town. I decided to cheat on my no gluten rule and indulge in some pancakes. These pancakes were served in a skillet and had bacon layered in between each one. The syrup was so thick it probably needs a different name, and it was kind of hard to eat, but aside from the syrup, these pancakes were pretty amazing. 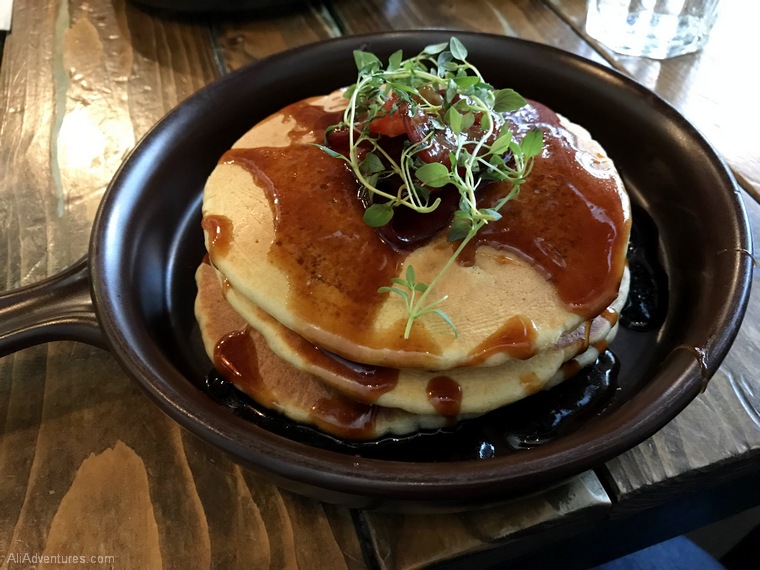 Where to stay in Wrocław

Andy and I are becoming quite snobby about hotels, I think. Gone are the days when we could handle sleeping in bare-bones hostels or guesthouses. Maybe it’s because we’re getting older and crankier. In any case, I LOVED the hotel we chose in Wrocław! It was the Sofitel Wrocław Old Town, and we’re already planning on booking there next time we go to Wrocław, which will hopefully be in December.

The Sofitel staff were super helpful and friendly. I asked the concierge about getting a couple of shot glasses because we were going to get a small bottle of Polish vodka to drink in our room, and not only did he get them and bring them up to our room, but he offered to go to the shop next door and pick up the vodka for us!

The bed was sooooo fluffy and comfy…I was in heaven. It had a feather topper on it, and even though I hate feather pillows, the mattress topper was wonderful. They also had a pillow menu, and we tried three or four different pillows, just because we could.

The location was also perfect. We were just steps away from the main square and easy walking distance to anywhere we wanted to eat, including all the restaurants I mentioned in the section above. It was also easy to reach by public transport, just a few blocks from several different tram stops.

Book the Sofitel Old Town on Booking here, or read the reviews on TripAdvisor here. 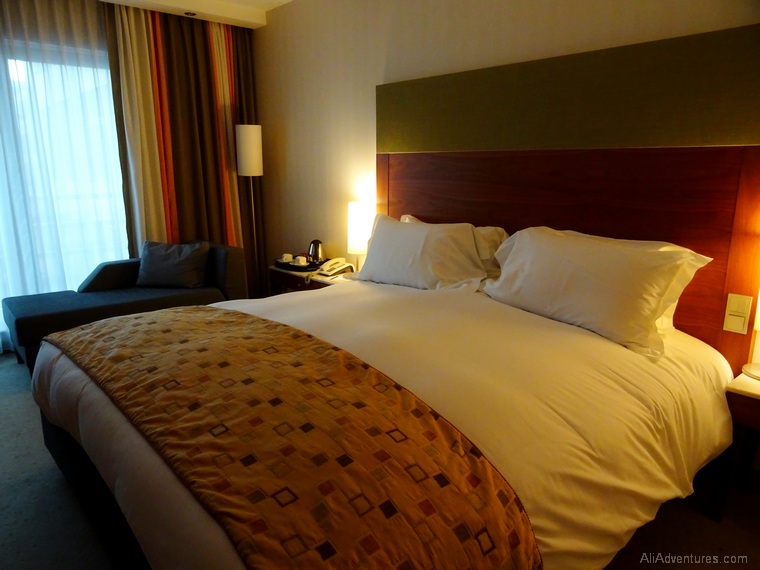 Andy and I have fallen hard for Poland. We didn’t even do that much in Wrocław, but we loved it. And luckily it’s only a little over 4 hours away by bus, so we’ll definitely be back. We’re already talking about going in December for a few days for Christmas markets. I highly recommend adding Wrocław to your Poland itinerary.

Sign Up
Should You Visit Ostrava, Czech Republic? How Much We Spent Traveling in Ostrava and Wrocław