Brussels was never high on my list, but when Andy and I were invited on a press trip to the city, I couldn’t resist exploring a new city and seeing what it had to offer. We only had a weekend, but it was an interesting city and we really enjoyed our time there. (Update: We even returned for more the next year!) Here’s a look at a few things we saw during our visit to Brussels.

Every two years, on even numbered years, Brussels displays this gorgeous flower carpet for just a few days. The flowers are grown in the Belgian city of Ghent in the largest indoor garden in the world. A different theme is chosen each year, and the display is set up in the main square, known as Grand Place or Grote Markt.

This year’s theme was Africa. The Belgian Tourism Board brought us into the city hall to a private balcony in order to view the flower carpet from above. It was enormous! I tried, but I couldn’t get the whole thing in one photo. 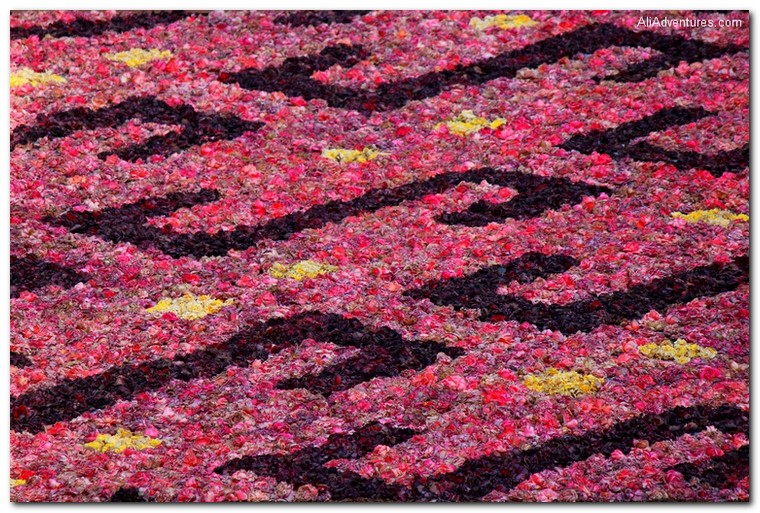 The year after seeing the Grand Place in Brussels covered by the flower carpet, we got to see the square the way it is most of the year. There were just a few stands selling postcards and souvenir drawings as well as a couple flower stands, so the square was wide open. It was one of the few warm sunny days we had during our travels in May, and Andy and I sat down in the middle to admire the buildings and watch the world go by.

Brussels is not a city I think of as having a lot of old stuff. It’s an old city, like most in Europe, but I always pictured it as a modern place. When we visited Brussels, we certainly found this to be true, but we also discovered a few bits of history hiding out as well. Pieces of the old medieval city walls can still be found in a few places, and I loved seeing them sitting next to modern streets and buildings.

Belgium is well known for several foods, including beer, chocolate, waffles, and fries. We tried several of each, and the reputation is deserved. There is good food to be found in Brussels! You can read more about food in Brussels here, but how about a little photo appetizer first.

Did you know Belgium has a humorous side? The country is home to the Smurfs and tons of other comics, and we also saw lots of quirky things around Brussels that can only be a result of a love of humor. I can appreciate a place that doesn’t take itself so seriously. You can read more about quirky and humorous Belgium here.