El Salvador wasn’t originally in our plans for Central America. But knowing a return trip to Central America would probably include Panama, Costa Rica, and Nicaragua, it seemed unlikely we’d be close enough to El Salvador to justify going so far out of our way. And Andy knows I can be a bit of a list ticker sometimes, so we carved out a few days to spend in El Salvador.

We decided to stay in San Salvador, the capital, for a couple of reasons. Lots of travelers go to the beach town of El Tunco, but we’re not really beach people, and a tiny town with only a couple of roads didn’t sound like our thing. We also read that there are several gorgeous volcanoes in El Salvador, and basing ourselves in San Salvador made it easier to visit them.

Our hotel was able to set us up with a car service to take us on a tour of the city on our first full day. The driver/guide didn’t speak any English, but by this point in our trip I was really having fun speaking Spanish (why can’t German be that much fun?) so I translated for Andy whenever he couldn’t use his knowledge of Italian to figure it out.

The driver took us to see Monumento al Divino Salvador del Mundo (Monument to the Divine Savior of the World) which was just a few blocks from our hotel. It is a statue of Jesus standing on top of the world, and it’s supposed to be a symbol of the country. 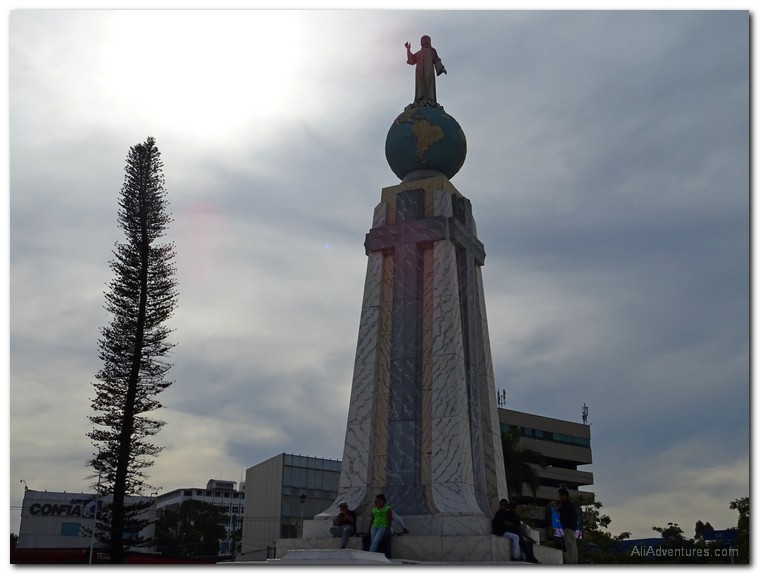 After taking us to Parque Cuscatlán, a big park where families were gathered to enjoy the warm Sunday afternoon, he took us to the San Salvador Cathedral. It’s an oddly modern building and felt rather boring inside, but the cathedral has an important history.

Almost hidden away in the basement level of the church is the tomb of Archbishop Oscar Romero, whose assassination in 1980 pushed the country into the civil war that lasted until 1992. I usually feel weird about taking pictures of tombs, unless maybe it’s someone who’s been dead for centuries, so I only have pictures of the main part of the church. 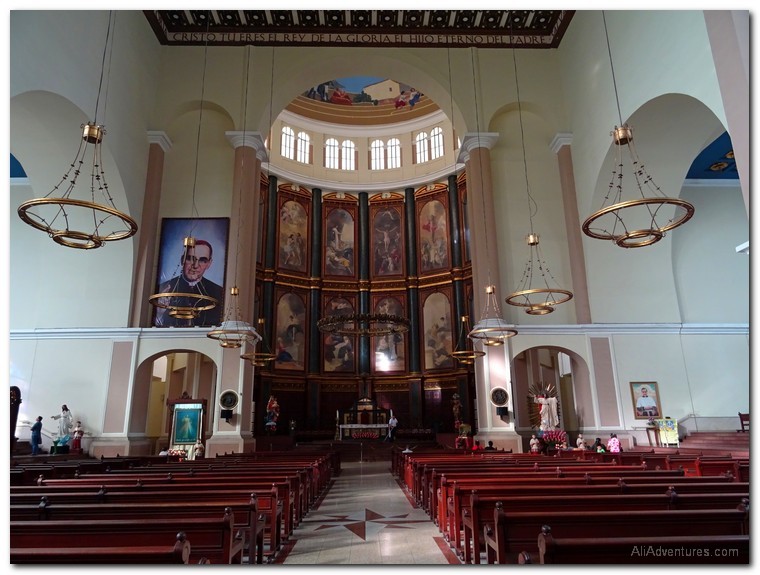 Next up we went to La Boca del Diablo, or the Mouth of the Devil. It’s a lookout point on the outskirts of the city, and by the looks of it, very popular with the locals. It was a Sunday, and tons of people were out to watch the sunset from these rocky hills. There was a short zipline connecting two hills. Stands were set up to sell food and trinkets. Traffic almost wasn’t moving as we drove up towards the parking spaces. And yet we seemed to be the only tourists around.

Instead of climbing the big hill (pictured below), we opted for a smaller one that still gave us some of the most amazing views of our entire trip. Definitely one of those places where the pictures don’t do it justice. 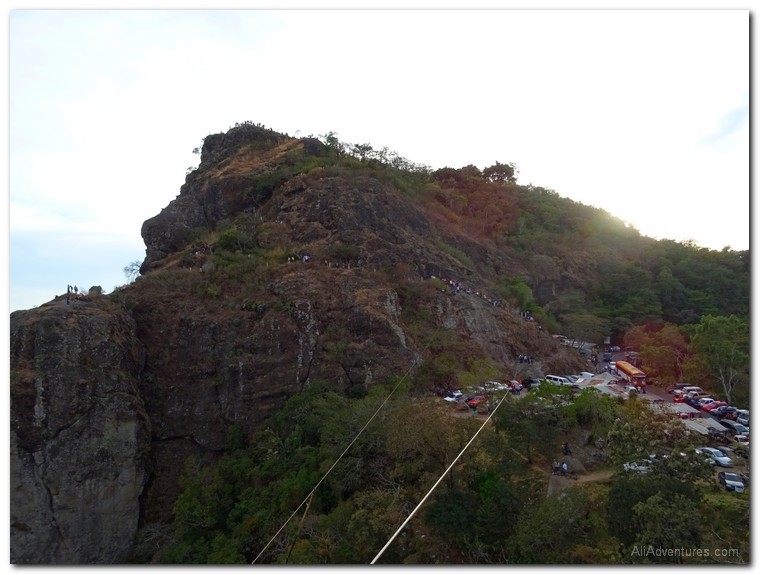 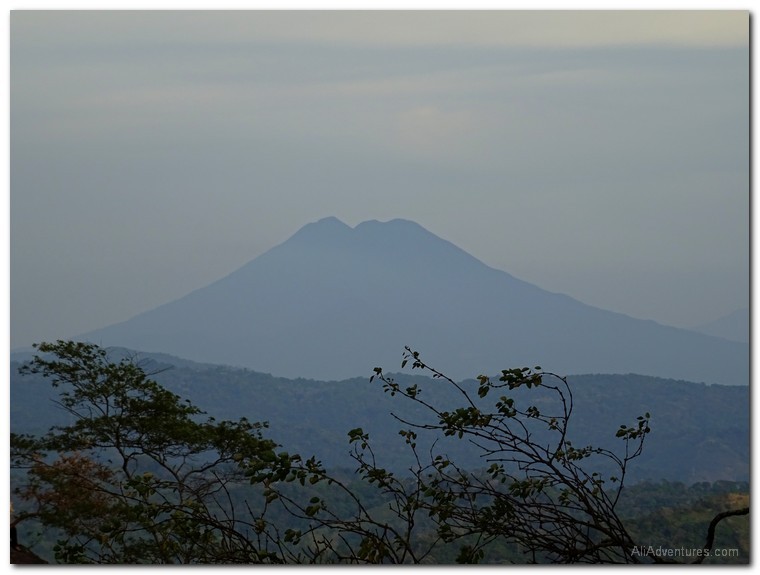 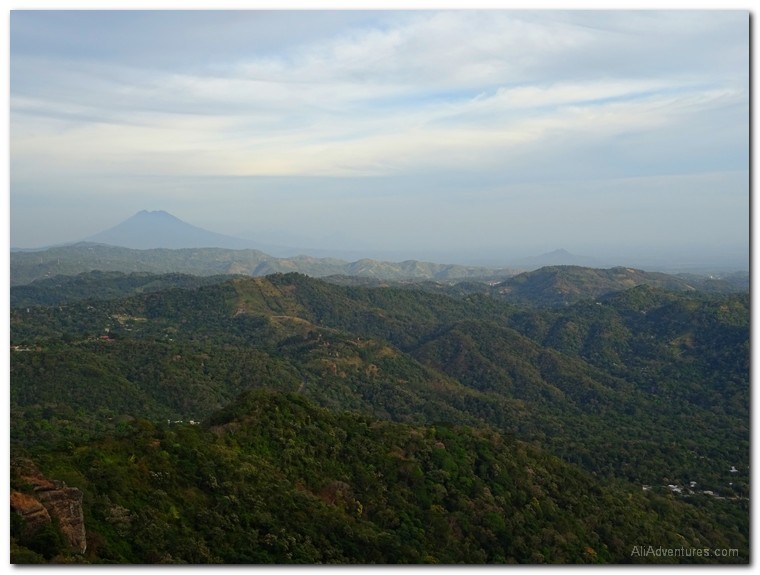 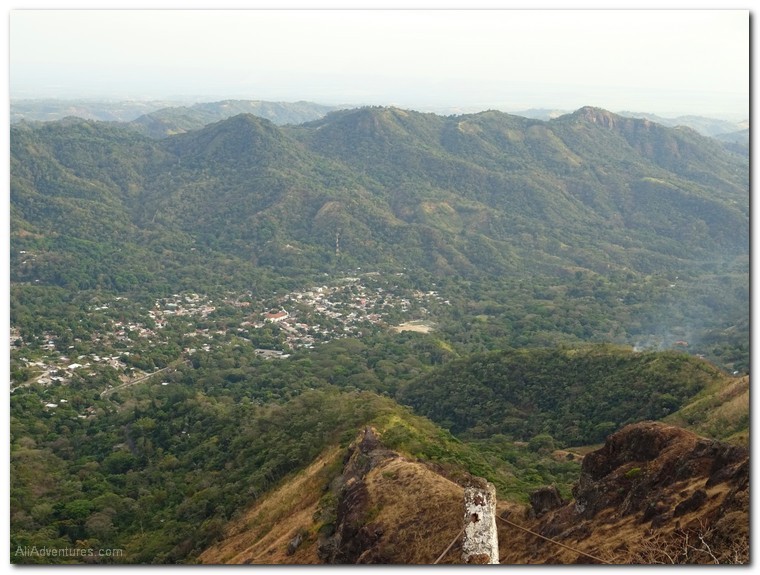 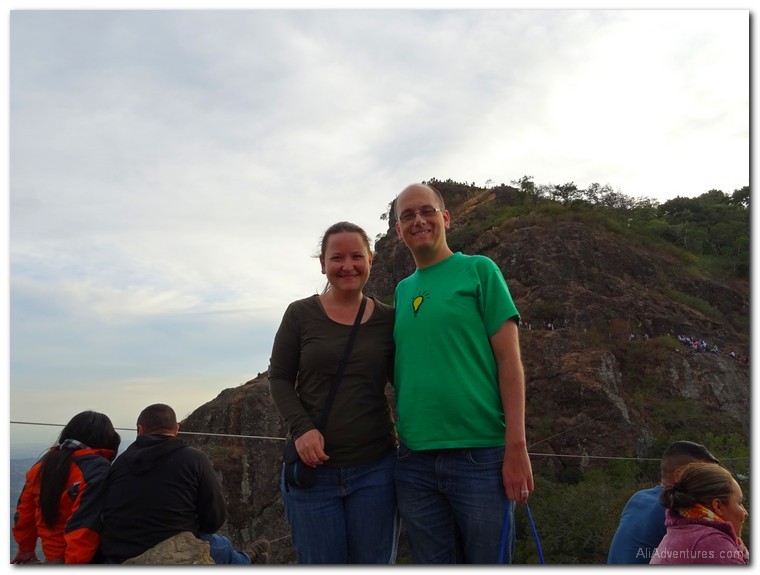 I’m really not that tall. I’m standing on a rock so our height difference isn’t so ridiculous.

At this point, I think our guide saw how happy we were with this lookout point and decided that’s what the rest of the tour needed to be about. I think we were also really enjoying how unexpected the whole day was – mostly because we had no expectations when we woke up that morning – but we weren’t going to complain about going to more lookouts. So we went to two more places for views of the city.

The next one was a little more urban feeling. There were shops and restaurants lining a street that overlooked the city. Again, there was lots of traffic and it was hard to find parking. Our driver kept telling the parking lot attendants “I have tourists here, and they want to see our city!” He was really proud to be showing off the city to visitors. 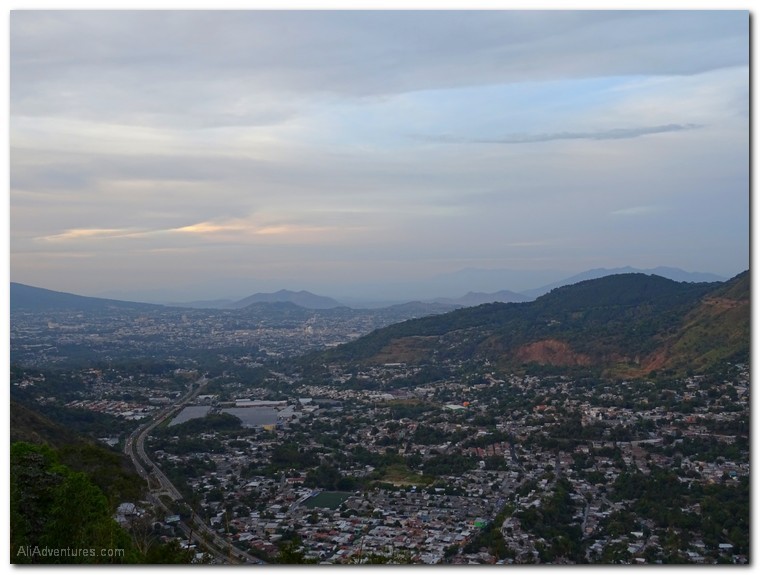 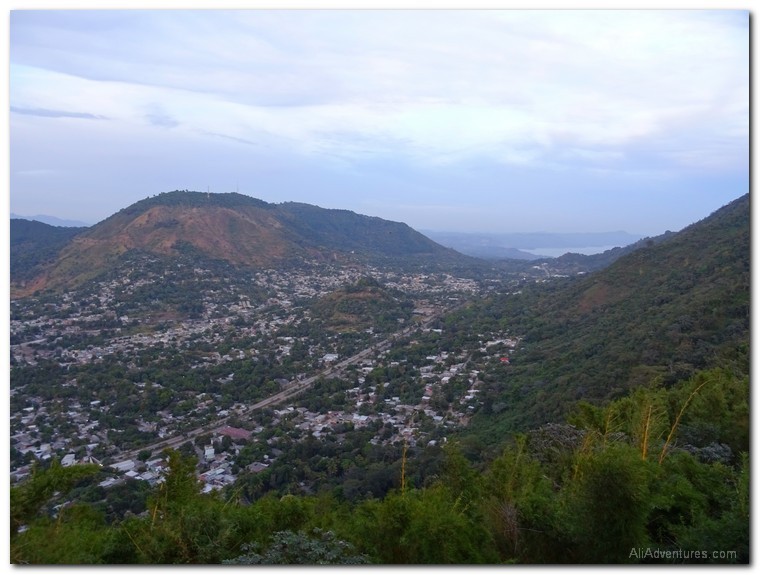 As the sun was disappearing, our guide took us to one last stop. This was a small spot next to a restaurant that overlooked the city, and there were only a few other people there admiring the view by this point. 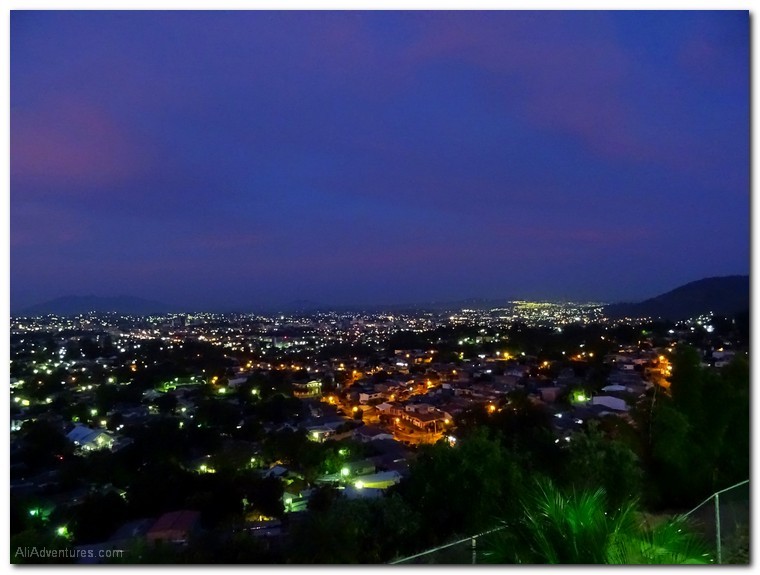 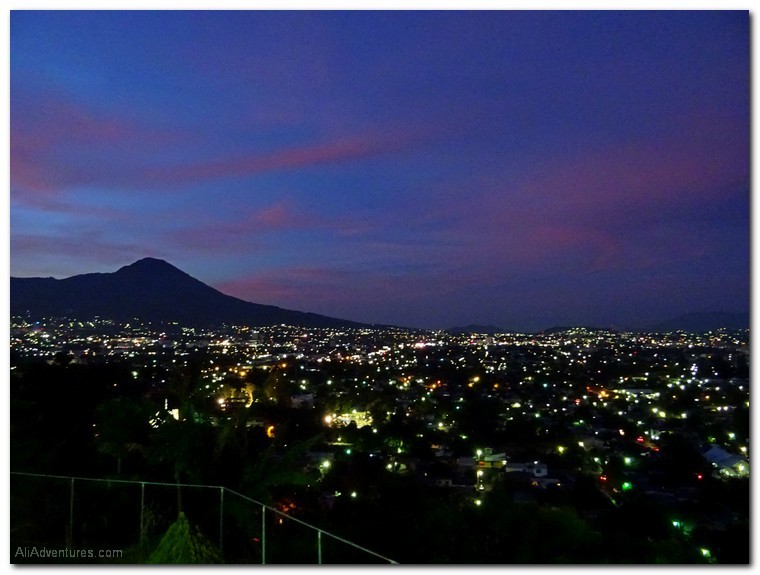 I’ll be honest, I was a little nervous about going to San Salvador, and to El Salvador overall. You hear a lot about how dangerous the country is. But while researching things, I found that it’s like most places – there are certain parts of the city that are perfectly safe, while other parts should be avoided.

We also found that Zona Rosa is well known as the more upscale neighborhood and is a safe area to be in, so that’s where we stayed. There were good hotel chains, like Sheraton and Hilton, and plenty of nice restaurants, including a few American chains, like Bennigans and Tony Roma’s.

It’s not normally the type of neighborhood we’d want to stay in since we prefer to get to know the local culture a little better, but given the city’s reputation, I was happy to stay here simply to not have to worry about figuring out what other parts of the city are safe. Even still, when we ate at Tony Roma’s, we only heard one other table speaking English, and almost everyone seemed to be local families out to dinner.

We stayed at Hotel Las Magnolias in the Zona Rosa neighborhood of San Salvador. Some of the staff spoke English, some only knew a few words. But they were all incredibly friendly and helpful, especially in setting up our tour of the city. Our booking came with free breakfast, which was served outside on the patio. The room was comfortable, and had a mini fridge and a separate seating area. It was easy walking distance to several restaurants and a grocery store. We paid US$185.86 for three nights.

Visiting San Salvador was really worthwhile. Even though we didn’t spend too much time there, we enjoyed what we saw, and I never once felt unsafe. As with most places, the people were friendly, and the ones we spoke with were really happy we were visiting their city.