A few months ago I decided I wanted to take a Spanish class in another country and live with a family. After much research I chose Quito, Ecuador. I’ve been taking a Spanish class at home for a few months before leaving for Quito, but I was hoping the class and family stay would would be a good step towards fluency.

After spending the weekend in Otavalo, late Sunday afternoon I went to meet the family I stayed with for the week. They lived in an apartment building with a doorman, and the family was a couple originally from Colombia and their 30 year old twin sons, Jaime and Bernardo. The mother was the sweetest woman ever, and I had a fairly easy time of talking to her in Spanish. I ate breakfast and dinner at their home, and the food was excellent. The sons were fun to talk to since we were the same age. They also spoke English, so we ended up going back and forth between English and Spanish. 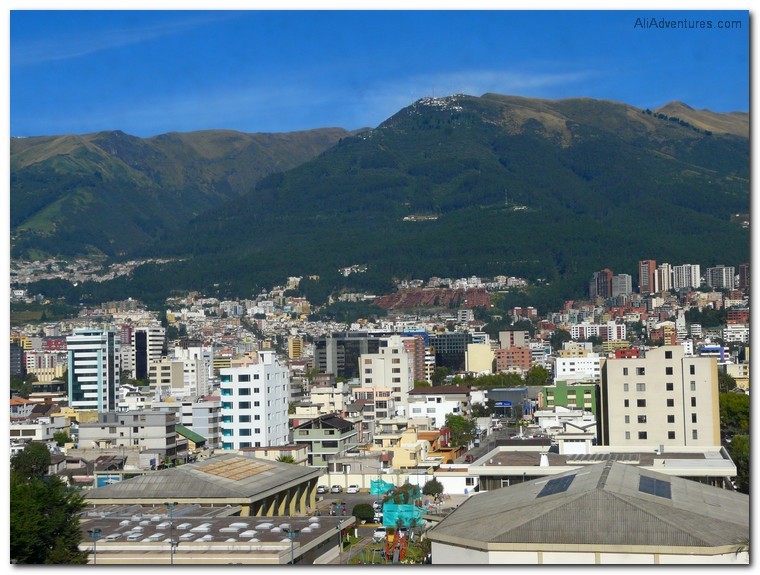 There were six of us who started at the school that Monday. After taking a placement exam, we went on a city tour of the old part of town. The next day I was placed in a class with a girl from Japan and a girl from New Mexico, and luckily it seemed to be a good fit. Our teacher gave us a good mix of grammar and writing, conversation and listening. We did activities with another class and watched a Chilean movie throughout the week. We covered all sorts of topics from the different forms of the past tense to Spanish swear words.

Proof of the improvement

For dinner Wednesday night, I met Charyn, a friend from Twitter, who was in Ecuador for one of many volunteer projects she’s involved with this year. It’s always great to meet people in real life who I’ve been talking to on Twitter, and Charyn and I had a great night.

After walking her back to her hostel, I got a ride home from the hostel across the street. After chatting for awhile, the driver and I realized he was the same driver who picked me up from the airport. This was one of those light bulb moments for me. During my ride from the airport, I was barely able to say more than the fact that I was in Quito for a Spanish class. We were talking in Spanish the whole ride after my dinner with Charyn, which made me realize just how much my Spanish had improved in such a short period of time.

So after a week of living with a family, four hours a day of classroom time in a group and two hours a day one-on-one, I felt much more confident speaking Spanish. Being forced into speaking and thinking in Spanish all day every day for a week really pushed me to improve. Even though I did miss just being a tourist, and it was kind of hard for me to be in the same city for a week, it was definitely a good experience.

Sign Up
Otavalo, Chickens, and the Effects of High Altitude Quito Old Town