On Friday, March 26th around 11PM I landed in Perth, Australia. I had officially stepped foot on all 7 continents. Though I was excited to start my trip to Australia, I was also exhausted from a long, hot day in Singapore and a 5 hour flight to Perth. I arrived at the hostel around midnight and was pleasantly surprised to find that I had booked a room with a private bathroom. (With rooms booked in 7 different cities, I couldn’t keep track of the differing amenities.) I found out the next morning that the shower went from burning hot to freezing cold with no middle ground, but at least I wasn’t sharing it with anyone or getting the toilet wet in the process of showering.

Last August I met Simone on an overnight ferry from Bari, Italy to Dubrovnik, Croatia. Since she lives in Perth, she agreed to show me around while I was there. We saw parks, a good view of the city skyline, the town of Fremantle, and the beach.

But the highlight of my day was a national park Simone took me to. The scenery was beautiful, and after wandering around for awhile, we came to a little tavern and went around to the back porch. There were a dozen or so kangaroos sitting there. Apparently the woman who runs the tavern feeds them, but they live in the wild. Seeing them there was so much better than seeing them in an artificial environment of a zoo. 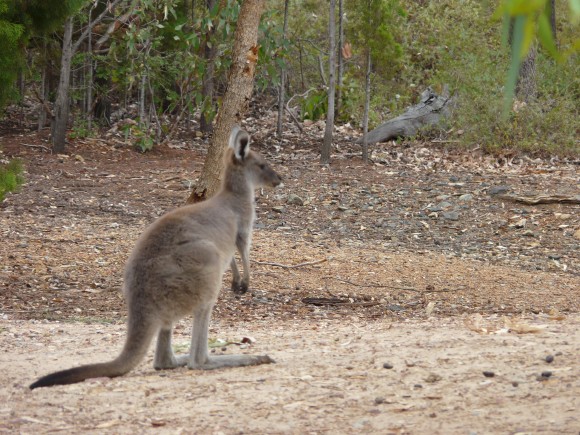 On Sunday I finished packing and called a taxi to pick me up a little after 8AM so I could catch my flight to Ayers Rock. But when I went to check out, I discovered that “check-out 9:30AM” meant AFTER 9:30AM.

I waited for the caretaker to come so I could get my $20 key deposit back, and started talking to a backpacker from Alaska who just showed up hoping to check in. His ATM card had been cancelled and he couldn’t get to his money until Monday. After 15 minutes, with my taxi driver waiting patiently, I had to leave. So I told the guy from Alaska my first name and that I had been staying in room #5, and told him he could have my key deposit. I figured it couldn’t hurt to pass along some backpacker karma.

That big rock in the Outback

I landed in the tiny town of Yulara in the red center of Australia Sunday afternoon. A free shuttle bus took us from the airport to the various lodging options on the resort, and there ended all things reasonably priced.

While my room was only $44, it was $44 for a bed in a room that contained 4 beds, plus sharing a huge dorm-style bathroom in separate building. I lucked out and only had one roommate who checked in after me, was asleep before I got in for the night, and checked out before me. I never really even saw her.

I decided I didn’t want an overpriced tour, so I reserved a spot on both the sunset and the sunrise shuttle buses. They were $45 each just to be driven from the resort to the rock. While looking at the rock, I had to constantly swat flies away from myself; they were relentless. 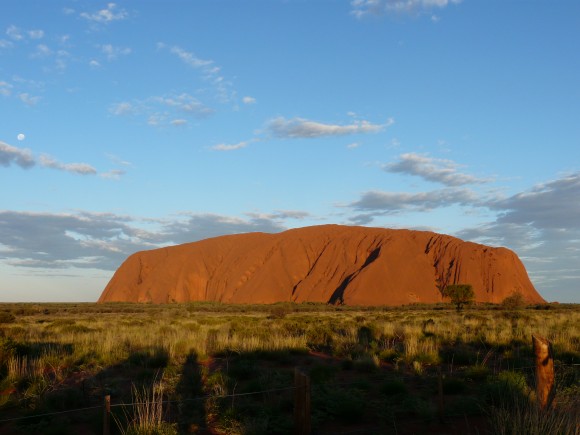 For dinner, I opted for an authentic, or at least stereotypical, Aussie meal of kangaroo and crocodile. Except it wasn’t a normal restaurant; we were given our food raw to take over to the BBQ to grill ourselves. Sounds like fun, until you realized you just spent $30 or more to stand over a hot grill for 20-30 minutes and cook your own dinner. The kangaroo was good, and the crocodile was ok but a little tough.

I spent the last couple hours of the night drinking $6 beers with some guys who turned out to be school teachers from Melbourne. They were on a 12 day trip with 8 teachers to about 100 15-16 year olds. Yikes!

In the end, I’m glad I went because the rock was amazing, even though I spent about $200 in 24 hours. You just can’t imagine or understand how big Uluru is until you’re standing in front of it.