Germany is slightly smaller than the US state of Montana, so it still surprises me that there are so many regional differences. You only need to travel an hour or two away to find different accents (or even different dialects),  different food, and different traditions. Frankfurt is no different. When we were making our arrangements to go to Frankfurt last weekend, Jördis from the tourism board suggested we meet for lunch and have some traditional Frankfurt food. 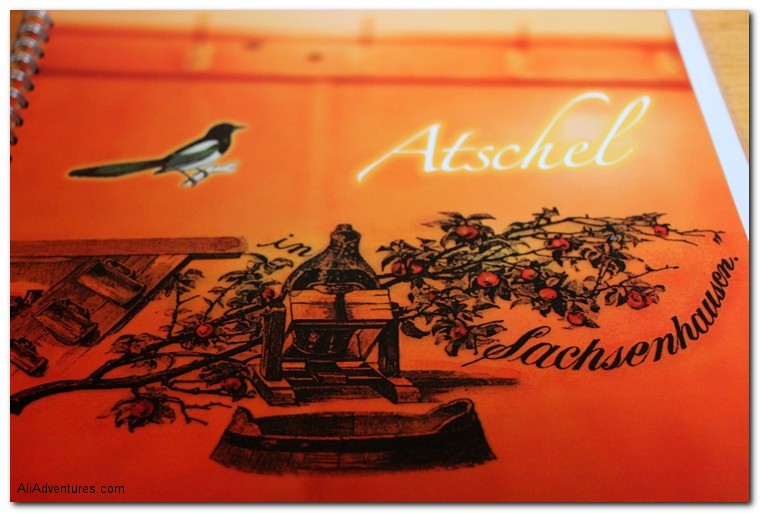 We met at a restaurant called Atschel in the Sachsenhaus area of Frankfurt, on the opposite side of the river from where the Christmas markets are. The wood tables and benches and laid back atmosphere made for a relaxed and homey feel. I felt like I was at someone’s house for a meal rather than at a restaurant.

To start, we ordered traditional apple wine and an appetizer of Handkässe mit Musik, which is cheese simmered in cider and has onions on top of it. It was an interesting combination that worked really well, and I especially enjoyed it because of the onions. Andy doesn’t like onions so this wasn’t his favorite dish, but I love onions. The apple wine was brought out in a pitcher called a Bembel and poured into the standard apple wine glasses. I thought it was a surprisingly light drink, not too sweet, not too sour. 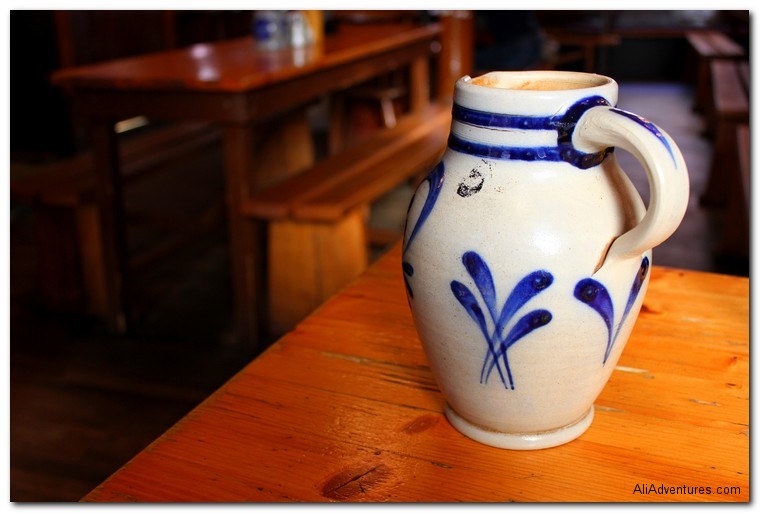 Apple wine has been linked to Frankfurt for over 250 years, but its history dates back at least 1200 years. Large scale production of apple wine started in the 16th century at a time when vine diseases were causing horrible problems with grapes that were used for wine. Its popularity grew more in the 18th century when climate changes meant grapes weren’t ripening. Many taverns today still produce their own apple wine. An apple wine festival is held each year in August.

Jördis had been raving about the traditional Frankfurter schnitzel with green sauce, so Andy and I both ordered it. The schnitzels were pork made with simple breading and lemon slices. It’s a similar style to the Wiener (from Vienna) schnitzels, except those are made from veal.

I wasn’t sure what to expect from the green sauce, especially once I saw just how green it was. But I loved it. It’s made with seven regional herbs, and restaurants typically have their own secret recipe. There’s even a green sauce festival each May where seven different chefs compete for the best green sauce. 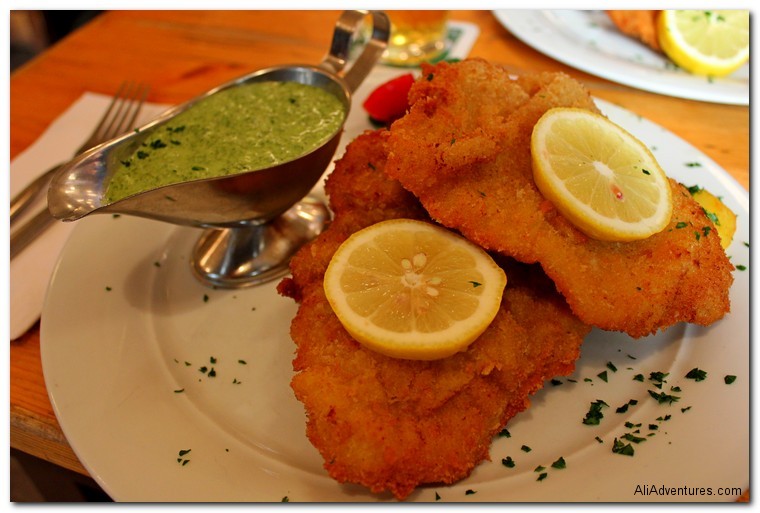 Unfortunately we were too stuffed to get dessert. I really enjoyed this meal, and it was a great way to start our weekend in Frankfurt. I really recommend trying the apple wine and green sauce when you visit the city. I just wish I could get them here in Freiburg!

We spent the rest of our time in Frankfurt enjoying the Christmas markets where we tried hot apple wine, local almond marzipan cookies, flavored almonds, chocolate covered chili peppers, and so much more. Frankfurt really is a great place to go for food, and I might have to convince Andy that we should make a return trip for one of the festivals.

Thank you to the Frankfurt Tourism Board for hosting us in Frankfurt and taking us out for this wonderful meal. All opinions are my own.