For our trip to the rain forest of Malaysian Borneo to see the orangutans and proboscis monkeys, we booked a cabin bungalow at an eco-friendly lodge. It sounded like a pretty cool place, it had great reviews, supposedly they had internet/wifi (they said it was broken when we got there), the property was gorgeous, and they provided free transportation to the Orangutan Rehabilitation Center. 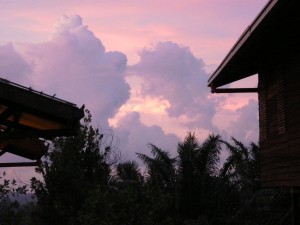 I know I’ve mentioned some bad rooms Amanda and I have stayed in, including the nightmare room in Senggigi, but this is not a story about a grimy, dirty room. This is a story about how it takes more than a bed and electricity to not be camping, and how two intelligent women can be complete idiots multiple times in the same day.

The door of our cabin was locked with a padlock, and on the other end of that same wall was the door to the bathroom. When we were shown to our room, the woman said to us, “The bathroom is outside. Ha ha, just kidding, not it’s not.” But really it was. Three walls and a semi-opaque tarp meant in reality it was outdoors. A bird could have flown in. But it was fine, it would take quite a bit of effort for someone to spy on us in there.

The two side walls of our cabin were really giant sliding doors, one leading to a back porch, the other just sort of opening to the outside for no purpose that I could determine. Since these sliding walls weren’t really doors, they didn’t latch or seal or lock. So that padlock 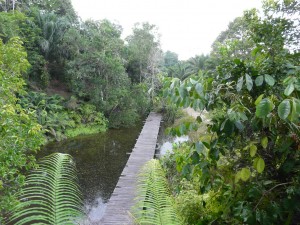 on the front door was kind of just for show, though again it would have taken at least a little effort for someone to get into our room. Since it was in the middle of a rain forest, there weren’t a lot of people around to worry about anyway, and in fact when Amanda and I went for a walk behind the cabins, we got lost within two minutes.

Before we set out to see the orangutans and proboscis monkeys, we counted our money and realized we might just barely have enough to eat lunch, so we brought some snacks. After our whirlwind day, we dropped our stuff in our room and went to dinner. When we got back an hour later, Amanda’s apple, which I had pulled out of my daypack, looked like a small bite had been taken out of it and small bits of apple peel were on the extra bed.

“Amanda, did you take a bite of your apple and then sit it down on the bed?” No, of course she didn’t do that. We quickly realized this meant an animal came in and ate some. We freaked out, Amanda grabbed the apple, took it to the bathroom and threw it over the tarp-covered fourth wall into the woods. Or at least that’s what she was aiming for. She actually hit one of the upper beams of the cabin, and the apple came flying right back at her, hitting her in the head. Don’t worry, she was fine, and succeeded on her second throw.

A little while later, we realized we completely counted our money wrong and didn’t have enough Malaysian ringgits to cover our guesthouse bill. (This was in spite of not buying any lunch because, for some reason, none of the parks sold any food.) We tried to get them to let us pay with US dollars, euros, or a credit card, but no luck. Our only option was to take a taxi for US$6 each way to the nearest ATM, about a half hour away. 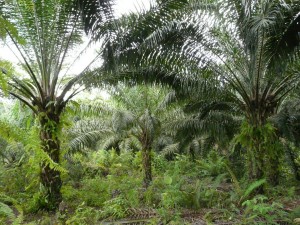 After the bill was settled and we finished packing up our things, we went to bed early. Despite the mosquito net, fan and air conditioning, plenty of bugs still made their into our room and into our bed. There didn’t seem to be too many of the biting kind, but they were still annoying.

Around 3:30 in the morning, we were awakened by a loud thump. We used our iPhones to illuminate the room but we couldn’t see anything. We tried to go back to sleep, but then we started hearing what sounded like a plastic bag rustling. Again we looked around with our iPhone flashlights, but nothing. Had to be something outside. But it continued on.

Eventually Amanda got up and turned the light on, since she was closer to the light switch. We both looked around, trying not to freak out too much, and suddenly I knew what it was. I had a box of crackers from a few days earlier, and there were a few left. Although I had closed the box, it was just cardboard, and it was sitting on the extra bed, just like the apple was. I saw that the box was now open, and the last remaining plastic package of crackers was missing.

I grabbed a flashlight (a real one this time) and started looking under the bed. There in the corner between the one stationary wall and the back sliding door/wall was the package of crackers. Rodent, lizard, monkey, who knows what kind of animal snuck into our room and ate my crackers. But I didn’t want it coming back, so I slid the wall open a few inches, reached into the corner with a flip flop, and kicked the crackers out onto the porch. (We retrieved it in the morning and threw it in the garbage.) Finally we got back to sleep, and the next morning we checked out.

I don’t ever want to be even this close to camping again.