Getting to Know Our Neighbors

It’s Thursday night. Andy is out with a couple of friends for a much needed guys night. I’ve just finished eating dinner, chicken and pasta with a lemon-butter-garlic sauce, and I’m about 25 minutes into Love & Other Drugs, a movie I know Andy won’t like. Suddenly I hear the doorbell ringing. Before I can even make it halfway to the door, it’s ringing again. I hesitate to answer since my German’s not good and it’s even harder to understand people on the intercom phone. But I pick it up anyway and say “hallo?” trying to make it sound German, and not like the English “hello.” 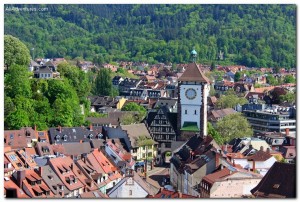 The harsh yet slurry voice of our 88 year old neighbor Frau Baumgartner comes through the phone. “Why are you not down here?” Only it’s in a heavily accented regional dialect of German so all I really understand is “Why are you not…” and I just imagine what the rest is. Our building and the building next door are having a grill behind the buildings in the shared driveway in front of all of our garages. Since Andy is hanging out with friends, I decided to stay in because I’m a bit shy about muddling through my horrible German with the neighbors.

But here is Frau Baumgartner, the matriarch of the building, insisting I grab a jacket and come down stairs. I tell her Andy is with friends, but still she asks why I’m not downstairs. Having no real excuse, “funf minuten” is all I can manage to tell her. I’ll be down in five minutes. “Ich warte…” is all I can make out of her response, I’ll wait.

I quickly put on some shoes, turn off the TV, and send Andy a text. I don’t even put my dinner dish in the dishwasher for fear of taking too long to get downstairs. I don’t want her ringing the bell again. She’s a kind and friendly woman, but she can also be a bit scary. As I’m coming down the stairs, I can hear her say “hallo” from the bottom. She really is waiting for me.

Once I’m outside, she hands me a plate. I try to tell her I already ate, but later I realize I was actually saying “I eat” not “I ate.” Like a grandmother who insists you have just one more serving, even though you’re stuffed, she starts pointing out the different side dishes on offer. She says something about meat, and I assume she’s reminding me everyone was to bring their own meat for the grill. “Ich esse” I say again, I eat, though I mean I’ve already eaten.

I scoop out a little bit of tomato mozzarella salad, and as I’m going for the potato salad, she shakes her head and says “Das ist nicht so gut.” That is not so good. I laugh as she’s insulting someone else’s potato salad, but I take some anyway, as well as a little Greek salad.  Just a few bites are on my plate, but hopefully enough to satisfy her. 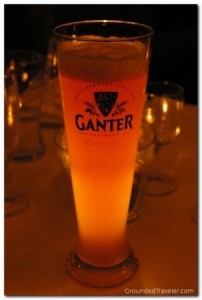 I see an empty seat next to Sabine who is about my age and lives above me and Andy. Our conversation goes back and forth between German and English as we both struggle to find words in each other’s language. Johannes, one of the hosts of the evening, asks me if I need something to drink. I tell him I brought water down with me, but he waves me off and puts a beer in my hand.

I manage to have a few simple conversations in German, alternated with little bits of English from the 40 and under crowd who all speak at least some English. I can pick out plenty of German words from their conversations, but still not enough to make sense of every sentence. Though it’s entertaining to listen to people from different parts of southern Germany tease each other about their accents and different words they have for the same thing. Three completely different words for the end of the bread, none of which are simply “end of the bread” like we would say in English.

After about two hours and two beers, Andy comes home and, seeing the lights are out in our apartment, he comes around to the back to find me. We continue talking to our neighbors as the crowd starts to dwindle. We talk about language, travel, work, and how in the US we would never have a grill like this with our neighbors. Finally around 1:30AM the five or six of us still outside decide we should call it a night. Luckily only one in the group (not Andy) has to work in the morning. Johannes insists he will clean up the next day, so we leave the folding chairs, tables and the rented grill outside.

Nervous as I am about my weak German skills, I am reminded once again that Germans understand how difficult their language is, and that so many of them speak English. I’m glad Frau Baumgartner insisted I come downstairs. I’m happy to have met some of our neighbors in the other building, and maybe even made a few new friends.

Sign Up
How Much We Spent Traveling in Europe for Two Months A Walk Through Ferrara, Italy