Today’s International Restaurant Project includes cuisines I don’t know much about. I had eaten Indian food a couple of times before, but not enough to know what I like. I had never eaten Israeli food. And I think I’ve only ever had Korean food twice before this. So it was an interesting mix. Take a look at the Berlin International Restaurant Project: India, Israel, South Korea.

While making plans to meet a friend for dinner, I mentioned my Berlin International Restaurant Project and asked if he had any suggestions. He also doesn’t eat gluten or dairy (and is much more strict about it than I am) so I knew that any place he could find food, I could find something to eat.

It’s widely known in Berlin that there isn’t really good Indian food here. But Brad suggested Chutnify, saying it was one of the best restaurants in Berlin for Indian food.

I had the Telangana Lamb Dosa, which comes with what looks like a tortilla but is made from rice and lentil batter. According to their menu, it’s soaked and fermented for a few days to develop the flavor. It came with lamb, three different chutneys, and a little bowl of cucumbers and other veggies. It was quite tasty. 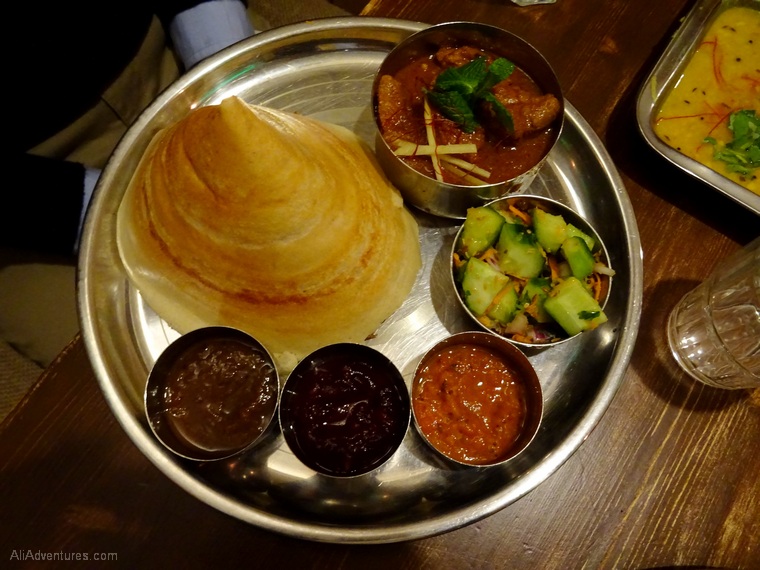 Andy had a mixed Thali with chicken, lamb, and pumpkin. It came with rice, chappati, some kind of soup, and a few other things. He wasn’t so impressed with the lamb, but overall it was a decent dish 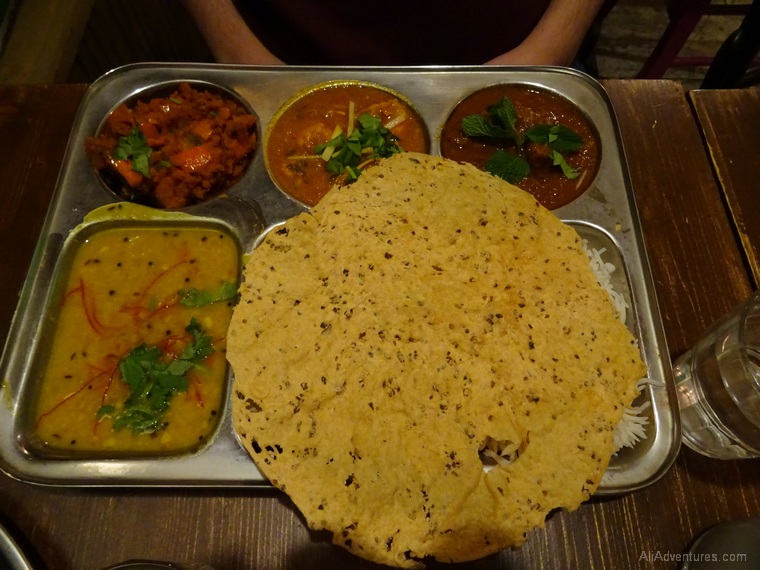 Brad had the Masala Dosa, which is vegetarian and made with potatoes. It also came with a few different chutneys, and one was really spicy. The kind of spicy where one small drop is sufficient, and much more would light your mouth on fire. But it had a good flavor too. 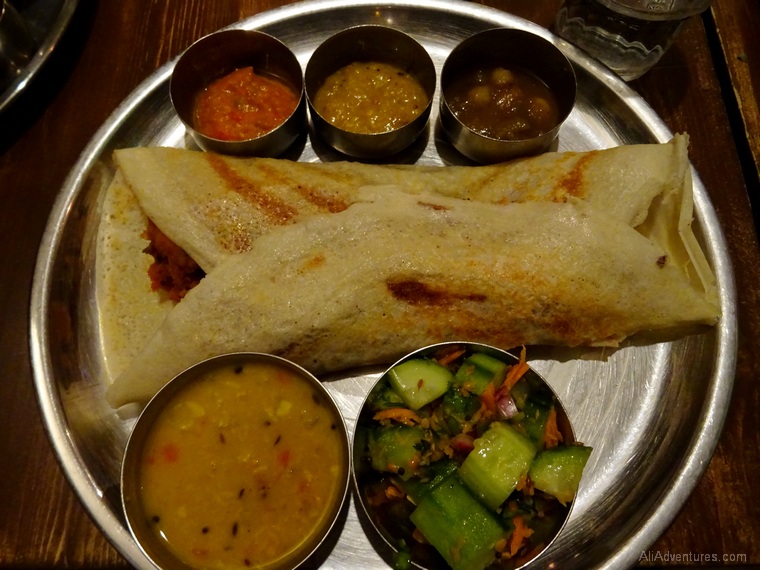 Overall, I thought this was a good meal. Indian still isn’t high on my list of cuisines I crave, but I was quite happy with this restaurant, and I’d go back.

I know nothing about Israeli food. Middle Eastern food in Berlin tends to all look the same as most places market themselves as serving hallumi and falafel and it all ends up looking very generic.

Djimalaya was at least a nicer-looking place and not fast food. Andy and I split a pitcher of mint lemonade, a chicken skewer plate, and sweet potato fries. The dish also came with some pita bread and yogurt to start, which was tasty, but I only ate a few bites…because gluten and dairy. 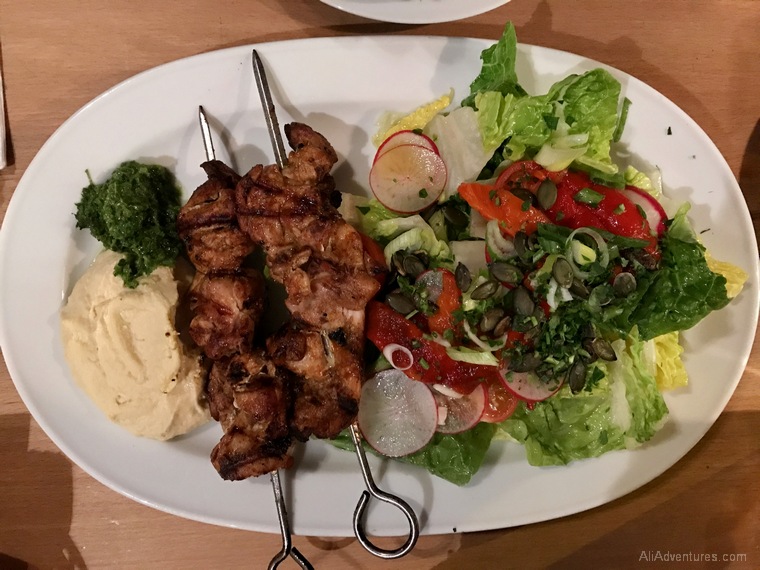 The food was tasty, but nothing special. I’d go back if I was with someone who wanted to go there, but I doubt I’d go out of my way for it. Maybe it would work out better if I liked hummus, which I do not, because they had lots of hummus options.

Years ago when we were in Berlin for a contract Andy had, we heard about a place called the Angry Chicken. We even found it, a food truck parked in a neighborhood we frequently went to for meals. But it always appeared to be closed.

Now they have a fixed location restaurant, not too far from that mystery truck. I met Andy there for lunch one day when he was at a co-working space nearby. They have a few rows of high tables and bar stools, and it can feel a little cramped, so it probably isn’t the place for a long, leisurely meal.

I ordered a typical Korean dish called bibimbap, which is rice topped with veggies, beef, egg (which I had them leave off), and a delicious spicy sauce. 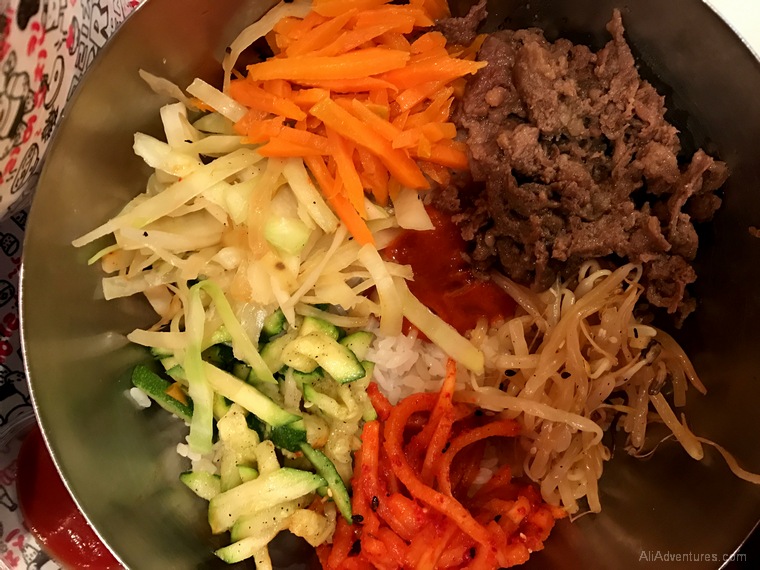 Andy ordered chicken wings, and because it’s Germany, he got the spiciest ones they have. Turns out they seriously know how to do spicy at this place, and he couldn’t even finish them. 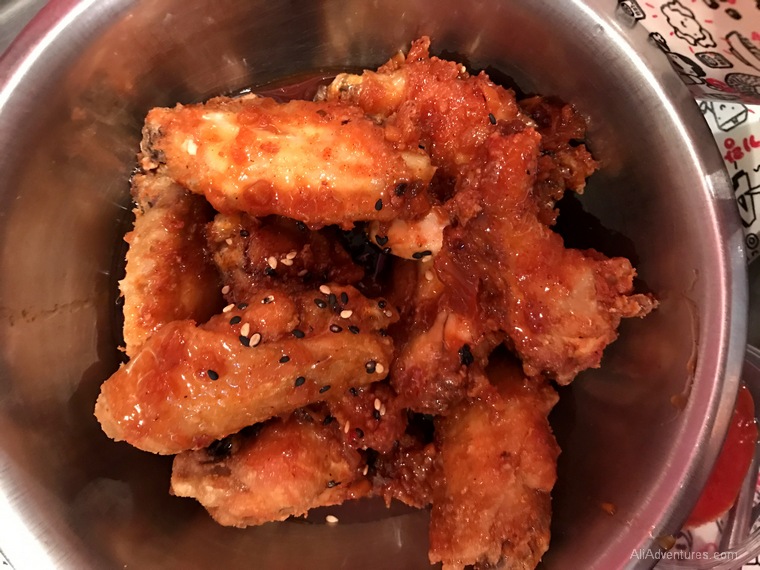 I definitely liked this place. It’s not super convenient to where we live, but it’s also not on the other side of the city or anything, so I’d definitely go back. If you’re looking for Korean food in Berlin, this is one I’d recommend.

I hope you enjoyed the Berlin International Restaurant Project: India, Israel, South Korea! Where should I eat next? 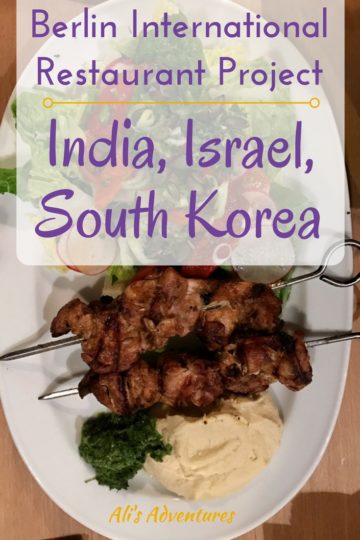 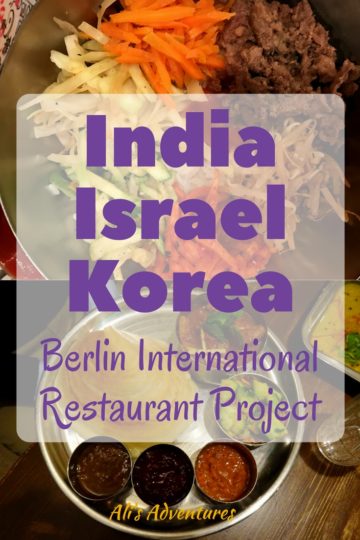 Sign Up
Non-Traditional Interviews: Round the World Travel and Living in Cairo How Do You Make Money From a Blog?