One of the things I miss most from the US is Mexican food. Maybe it’s really Tex-Mex, but regardless, I miss the spicy salsa and the unlimited baskets of warm crispy tortilla chips, the quesadillas, fajitas and tacos. Two years ago on one of my first visits to Freiburg, Andy took me to meet two of his friends at a Mexican restaurant, and I was horrified. It was NOT good. It was one of those panicked “am I really moving here?” moments. Obviously I chose my love for Andy over my love for good Mexican food, but it left a salsa-shaped (does salsa have a shape?) hole in my heart.

Where are the Mexican restaurants?

I have since started playing with salsa recipes so I can have decent salsa from time to time. I also started looking around to see what other Mexican restaurants Freiburg has to offer. In Atlanta, it was hard to drive more than a mile or two without passing a Mexican restaurant of some variety, even if it was a chain. There was one across the street from my apartment. But because Germans typically don’t like spicy food, and there aren’t a whole lot of people moving here from Mexico, there just aren’t many options here. 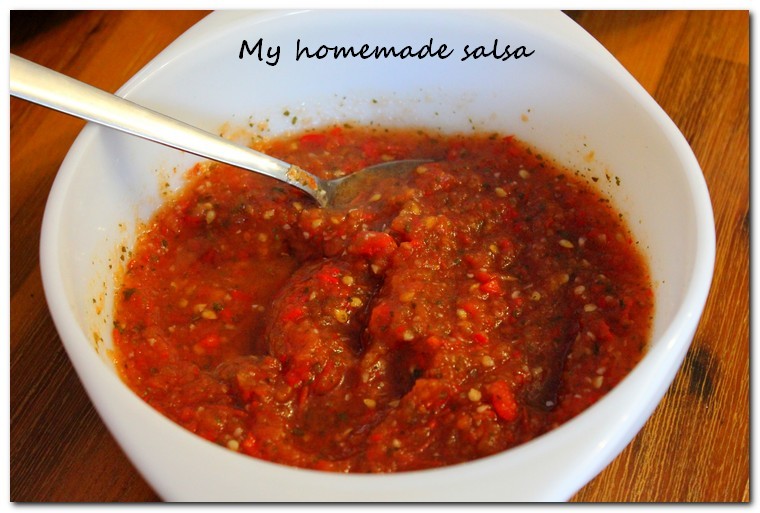 There was a halfway decent place in the food court we frequent, but we walked by one day last year and noticed it had been converted into an Afghan place. Oddly enough it was run by the same guy. I’m willing to bet he is from neither Mexico nor Afghanistan. There was another place Andy knew of but it closed before I ever had a chance to see it.

So I decided to do my own review of the three remaining Mexican restaurants. It took a little while because I can only subject myself to so much bad Mexican food in a short amount of time. I cry a little inside each time the “spicy” salsa turns out to be completely void of heat, or my meal, regardless of what it is, comes with corn in it, because apparently corn equals Mexican. (Note: The following photos were all taken with my iPhone. Bad Mexican food does not deserve the good camera.)

This restaurant is across the street from the popular Mexican place, which means you instantly know you’re NOT in the popular one. We tried the popular one first, but there were no available tables. Enchilada is about twice the size but only had maybe three occupied tables.

They had several different types of salsa on the menu, which I thought was unusual but promising. I asked the waiter to get me the spiciest one they had. Mild grocery store salsa in the US has more spice than this stuff. I can’t imagine what the lower spice ones must have tasted like. 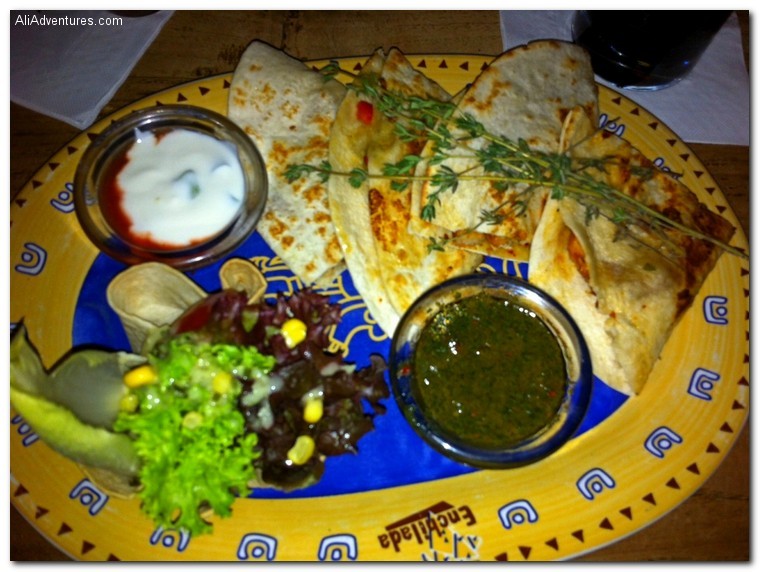 For my meal I ordered a chicken quesadilla. It looked decent enough when it arrived, although there was a surprise lurking inside when I opened it up to add salsa and guacamole. First I saw corn, which sadly I expected but really shouldn’t be in a quesadilla. But then I saw something green. Were those green beans? Yes, yes they were. They put GREEN BEANS in my quesadilla! WHY?! 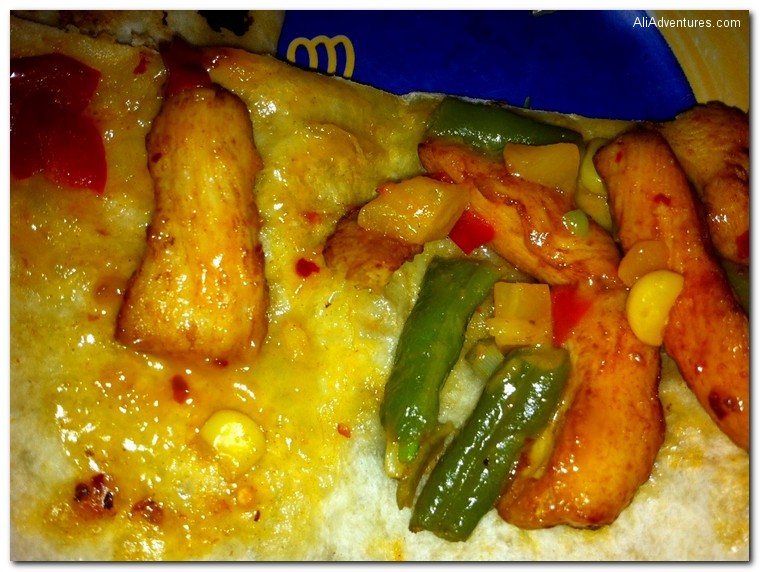 I’m really not sure if this place is trying to be a Mexican restaurant or just generic Latin America because they have flags from every single Latin American country hanging on the walls. They also have hamburgers, flamkuchen (a local specialty similar to pizza), pasta and other non-Mexican-like food on their menu. But about a third or so of their menu is tacos, burritos, fajitas, etc. 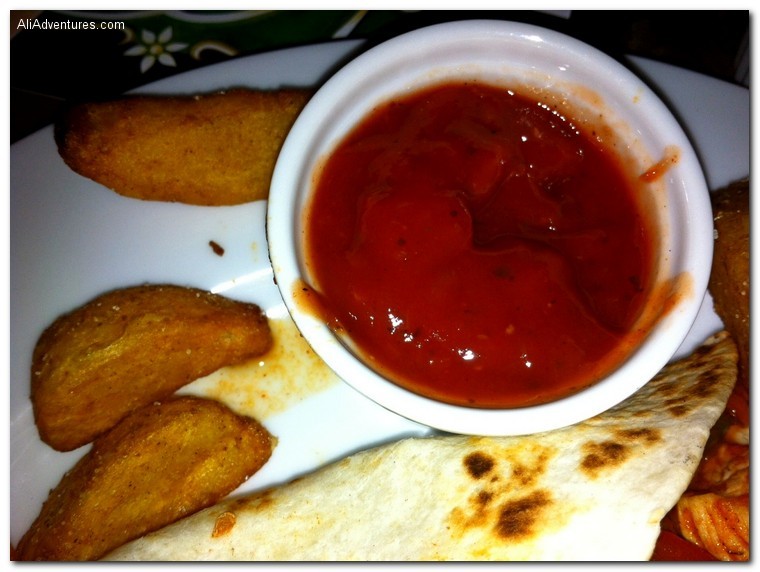 I’m not a fan of burritos. But one night we met friends here for dinner and they already ordered by the time we arrived. One of our friends ordered the burrito, but it looked nothing at all like a burrito. So I decided to give it a try. 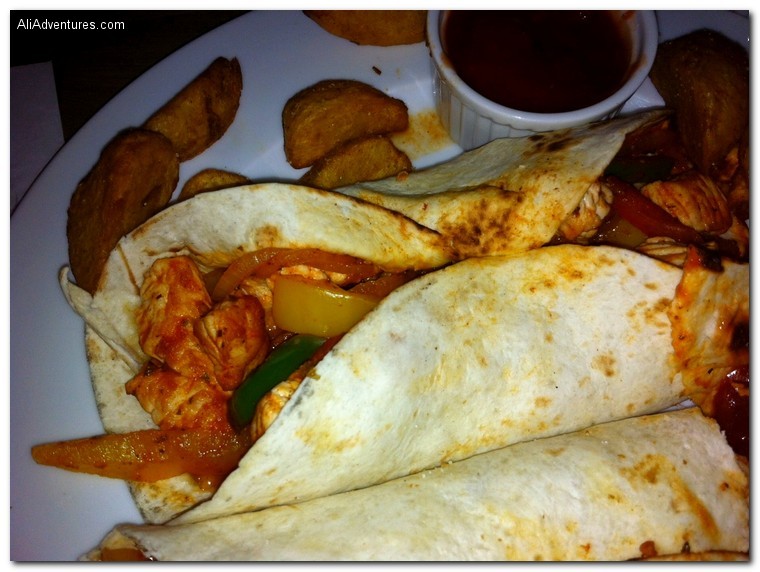 Basically it’s fajita style chicken, onions, peppers and mushrooms (I have them leave off the mushrooms) with some kind of yummy Mexican-ish seasoning wrapped up in a flour tortilla. It comes with a side of potato wedges and a little tub of decent salsa. While not the same as what I’d get back home, and inaccurately named, this is by far my favorite Mexican food in town.

This is the popular Mexican restaurant. It’s also the one Andy took me to two years ago that has forever tainted my image of Mexican food in Germany. They’re always crowded at dinnertime, and even on a Tuesday night when we showed up, we had to share a table with someone else because nothing else was available.

The waitress brought us a tiny bowl of chips and an even tinier tub of completely liquid salsa. We only ate two or three chips before I took this picture. The salsa wasn’t great but at least it had a slight kick to it. 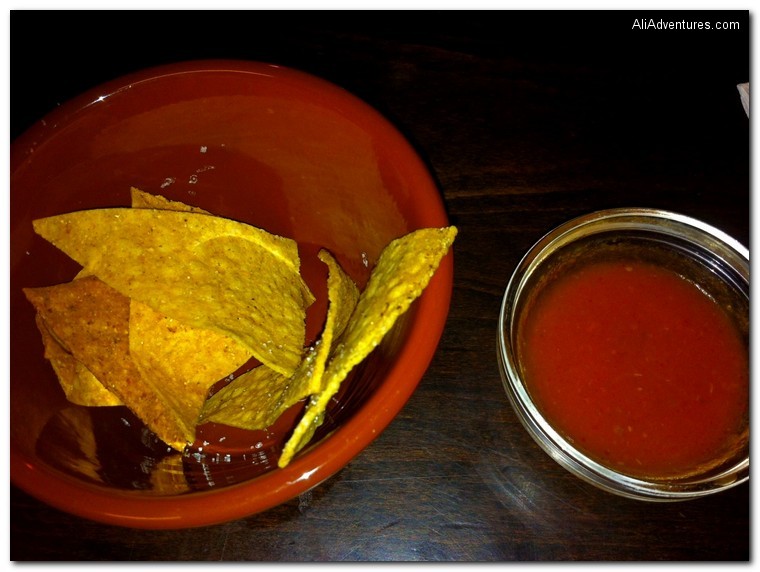 Since I already knew from past experience that I didn’t like their version of a quesadilla, I decided to try tacos this time. When the waitress brought our food, I thought for a minute she got the wrong order because the first thing she put on the table was a ceramic pot. It contained the chicken for the chicken tacos, covered in a layer of cheese, and it had been baked in the oven like a casserole or something. Then she gave me an empty plate, a bowl of guacamole and pico de gallo (not that they called it that) and a basket with flour tortillas. 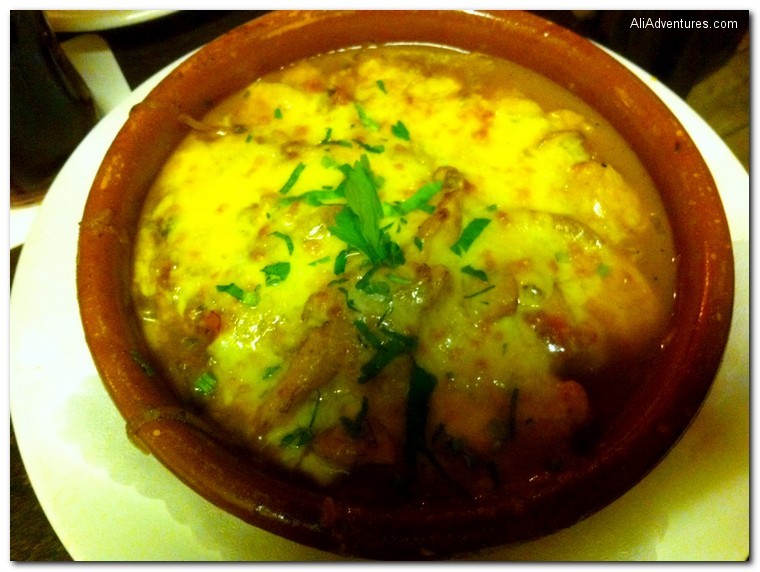 Utterly confused, I began to scoop out the chicken, cheese and veggies onto a soft taco, when I realized the chicken was in some kind of soupy sauce. I began having flashbacks of the awful quesadilla from two years ago, as it too was oddly soupy. These alien tacos had some kind of strange flavor I couldn’t figure out, but it certainly didn’t fit. Somewhere in the middle I discovered two tiny chili peppers, so for two bites, my tacos were spicy. Couldn’t they have chopped up the chilis and spread them out a little? 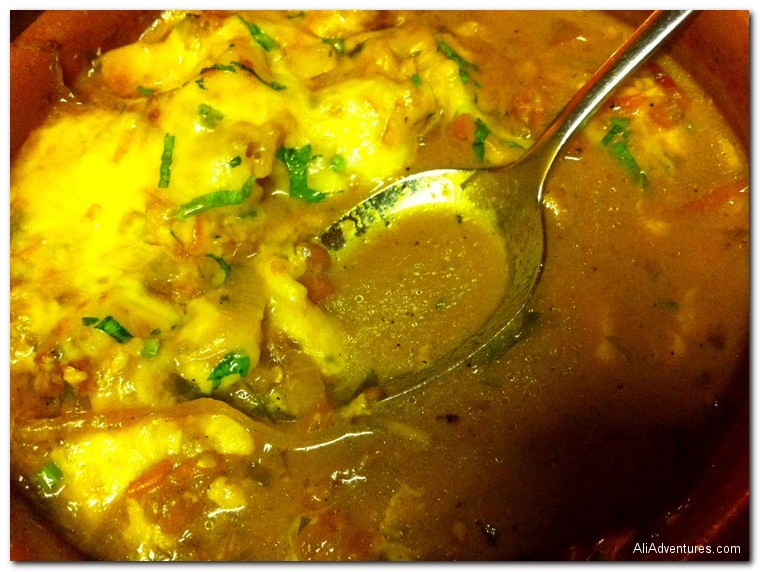 El Gallo might be the most popular Mexican restaurant in town, and it’s the one everyone mentions with enthusiasm when I mention how much I miss Mexican food, but I will not be returning if I can help it at all. I will also be steering clear of Enchilada. Any place that puts not only corn but also green beans in a quesadilla should be banned. However, I will gladly return to El Bolero for their misguided but tasty burritos. For those of you traveling to Germany, I have heard of good Mexican restaurants in bigger cities, but be warned, it will probably never match your favorite Mexican restaurant back home.

Update January 2014: I have since spent three months in Berlin eating as much Mexican food as possible, and the options are much better than in Freiburg. Check out the results here.