After spending two days in the northern part of Queen Elizabeth National Park, we were ready to head south to continue our safari. I didn’t really know what to expect, besides that our itinerary said we’d be searching for tree climbing lions. It turns out even getting from point A to point B can turn into a game drive when you’re in Uganda. Here’s what we experienced on our Uganda safari in the southern part of Queen Elizabeth Park.

Driving from north to south in Queen Elizabeth National Park

In order to get from the northern section to the southern section, we actually drove through the park. Queen Elizabeth National Park in Uganda is rather large, and the road goes right through it. This meant we didn’t have a boring drive ahead of us. We actually had a bit of a game drive while in transit.

One of the perks of having a guide/driver all to ourselves was that we had more flexibility. So whenever Katie and I saw something interesting, we would ask Peter, our guide, to stop the van so we could have a look. Although often he saw animals before we did since he’s trained for this.

Along our drive, we saw elephants, many types of birds, lots of kob, and some kind of big lizard. Never a dull moment. 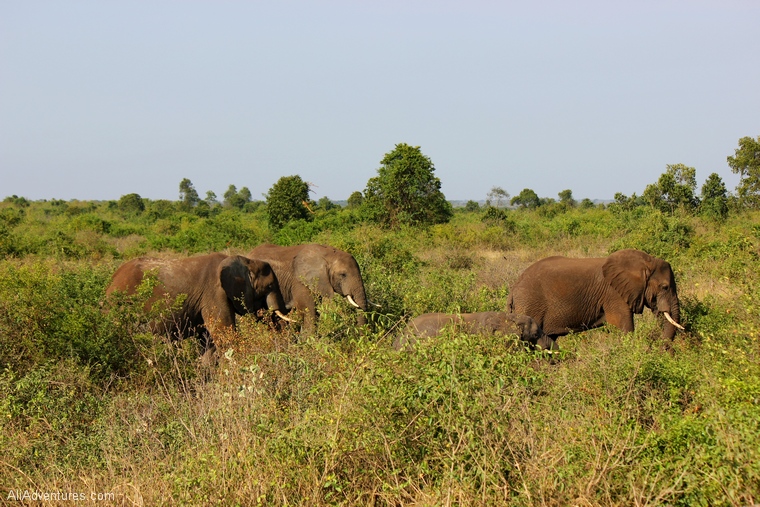 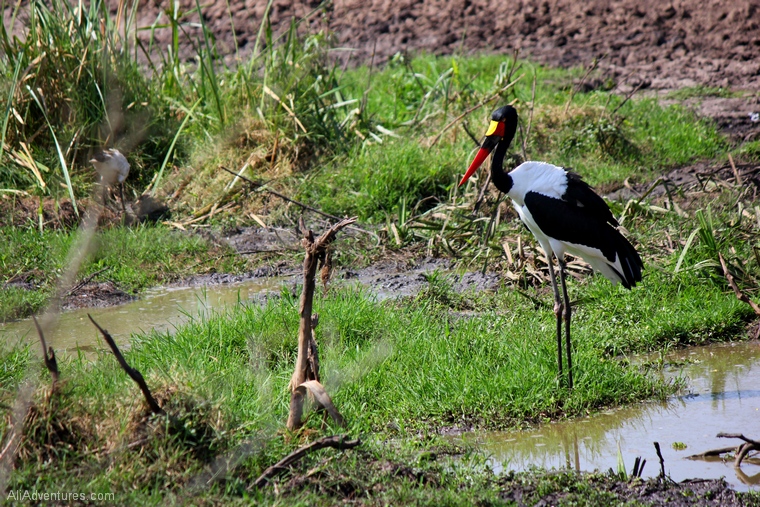 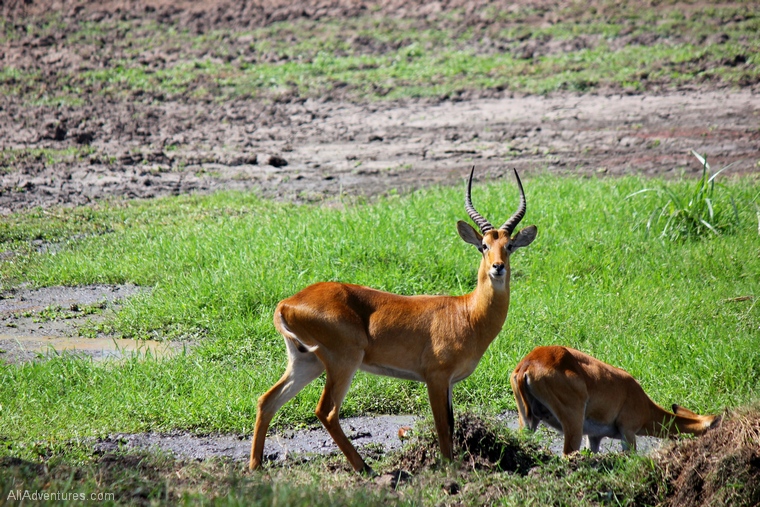 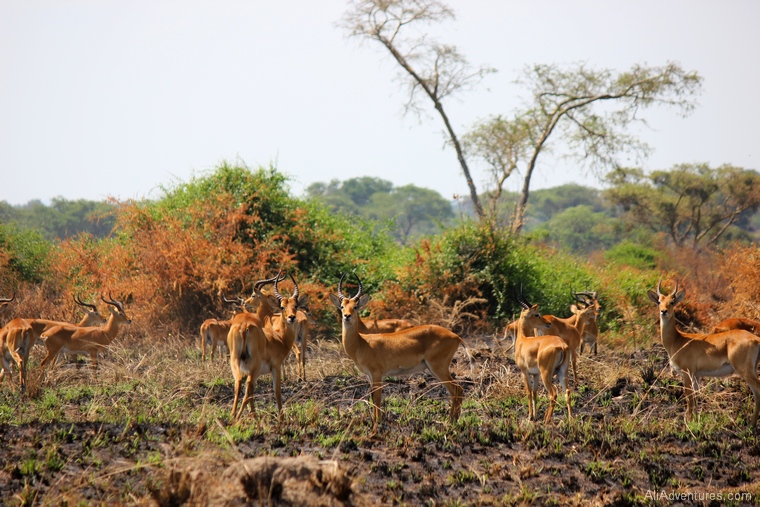 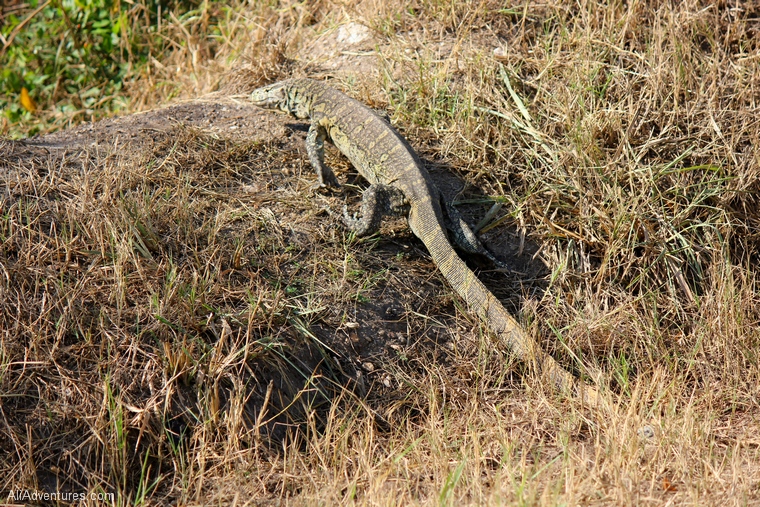 Kob are the national animal of Uganda, so it was not surprising that we saw them everywhere. But when we reached the southern part of Queen Elizabeth National Park, we also started seeing topi, which are also in the antelope family.

While driving around the park in search of tree climbing lions, we saw hundreds and hundreds of kob and topi, herds of them casually walking around and then galloping off into the distance. With no one else around, it was so quiet and fascinating to watch them and listen to the galloping sounds. 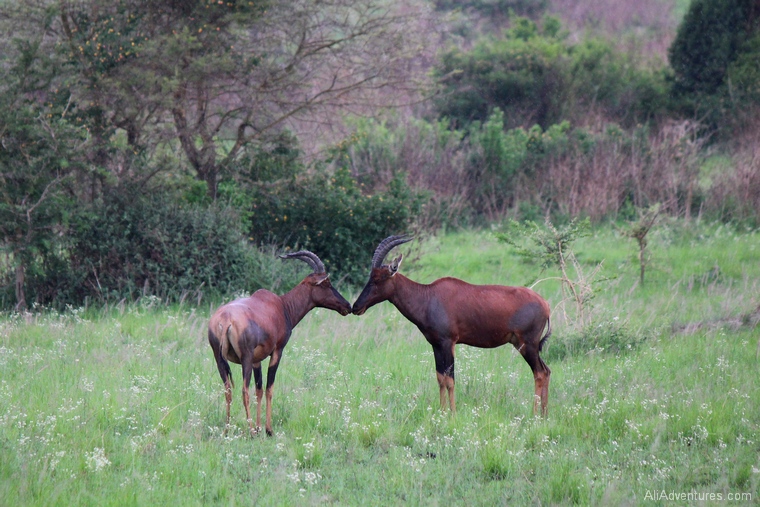 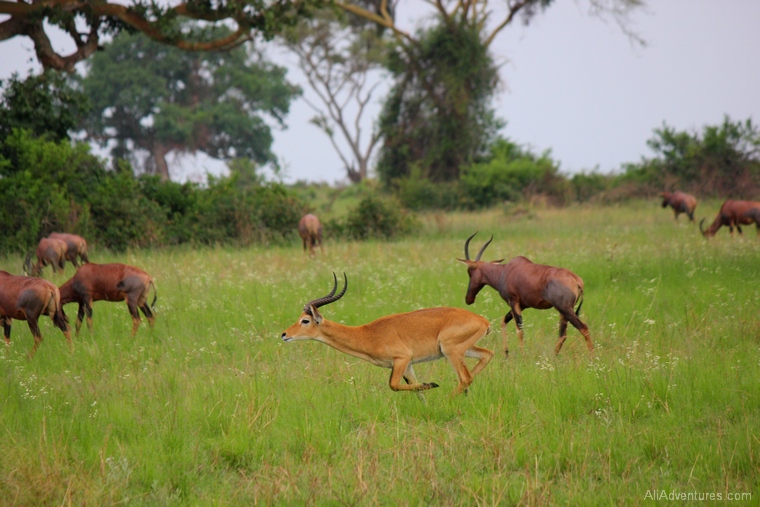 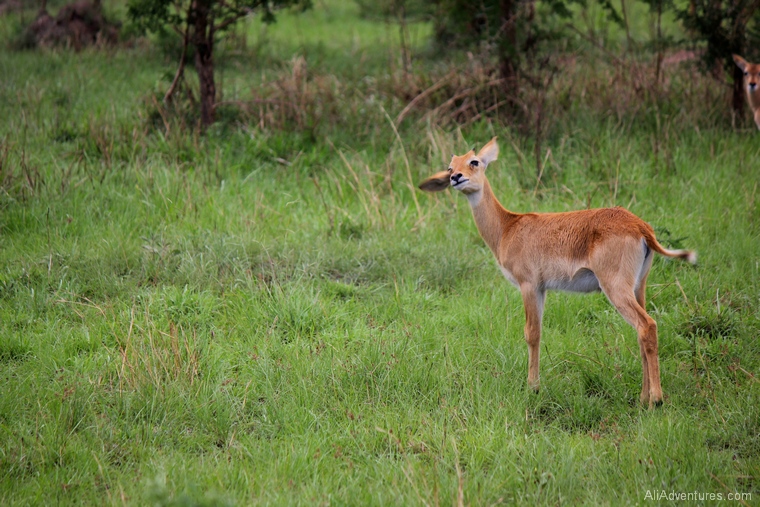 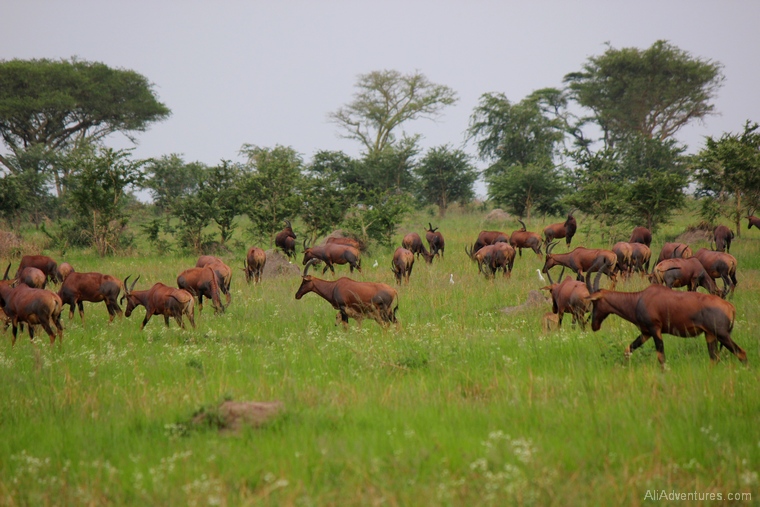 The main draw to this part of the park is the tree climbing lions. We had already seen them the day before, but we had high hopes of seeing lots more in this section of Queen Elizabeth National Park. So while we enjoyed seeing all of those kob and topi, Peter was really driving around to check out lots of trees where the lions often hang out.

But the trees were empty. Eventually we had to call it quits and accept that it just wasn’t going to happen. After driving through the exit, Peter stopped to point out some monkeys up in a tree, and that’s when another safari van stopped to chat with ours.

The driver of the other van had just gotten word that some lions had been spotted in some trees up the road from where we were. So Peter took off behind the other van, and hope that we might see more lions returned.

When we stopped a few minutes later, we peered into the trees, and finally, off in the distance, we saw them. Several lions were lounging in a tree just barely close enough for me to see them through the zoom lens of my camera.

We watched as the male lion decided to get up and stretch and yawn and eventually jump down from the tree. Then a few of the others shifted positions on the tree, while at least one lion looked like he wanted to move but couldn’t quite figure out how.

Katie and I watched them for as long as we could, and even from such a distance, it was one of the highlights of the trip. 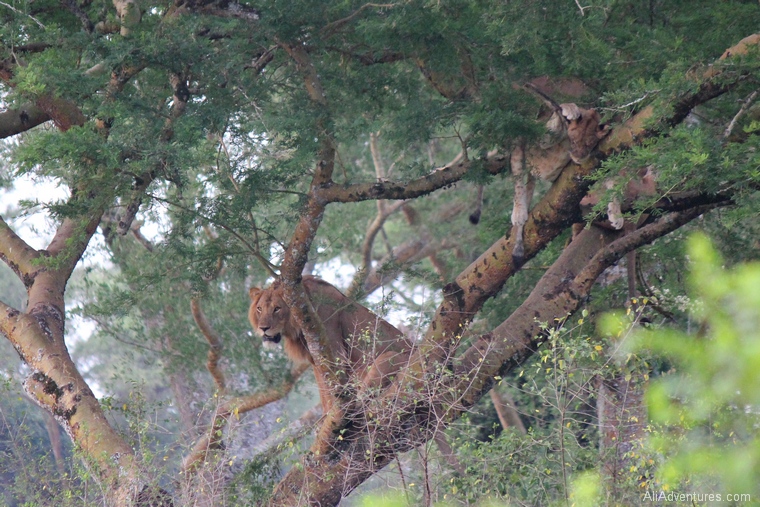 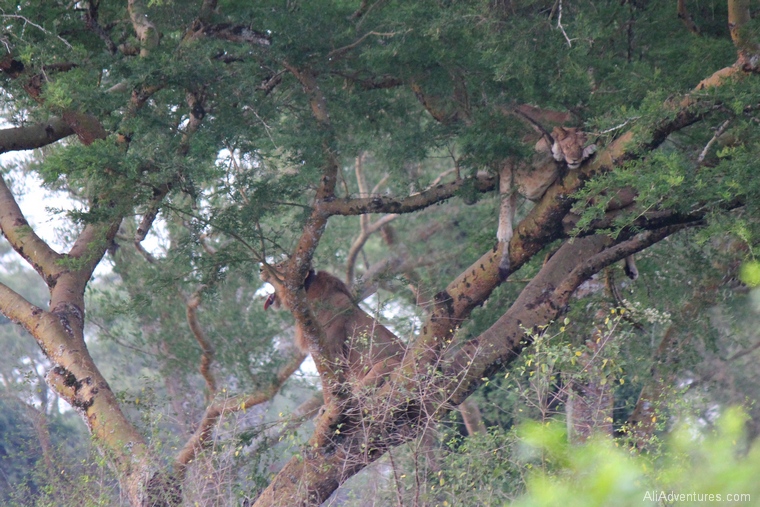 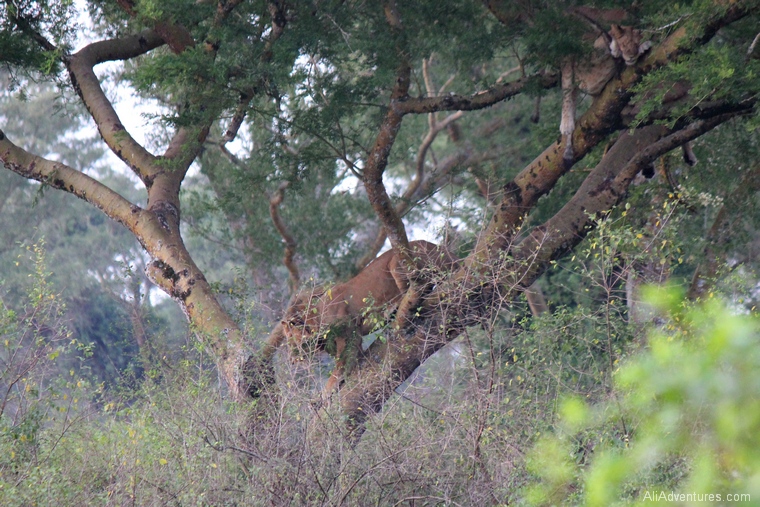 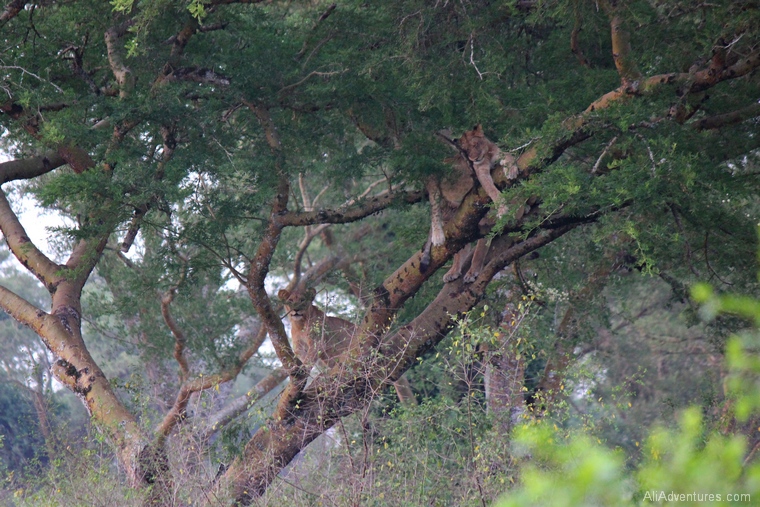 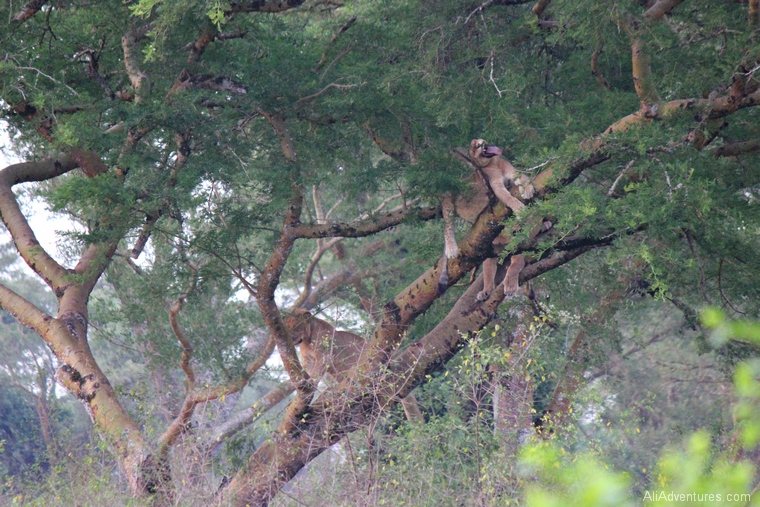 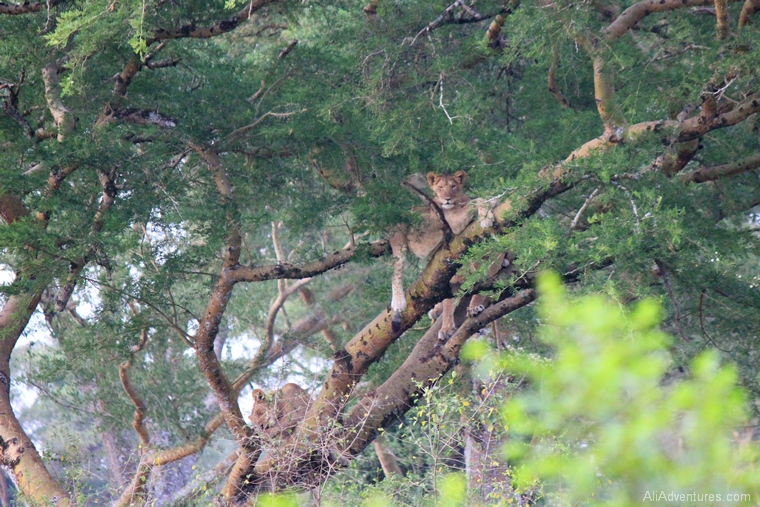 Elephants in the morning

The next morning we got up for one last game drive before leaving Queen Elizabeth National Park. Peter drove us around the park still hoping we’d see more tree climbing lions, but we were more than happy with the herd of elephants we saw instead. We followed them as them moved from one area to another, and it was a wonderful good-bye to such an amazing park. 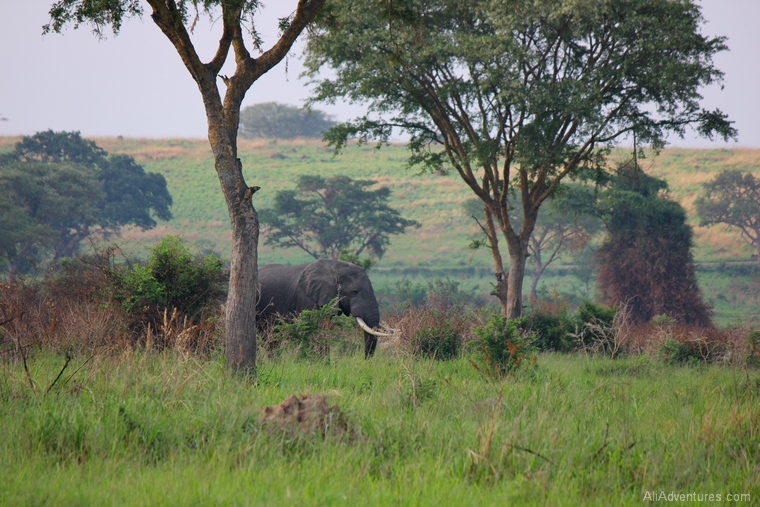 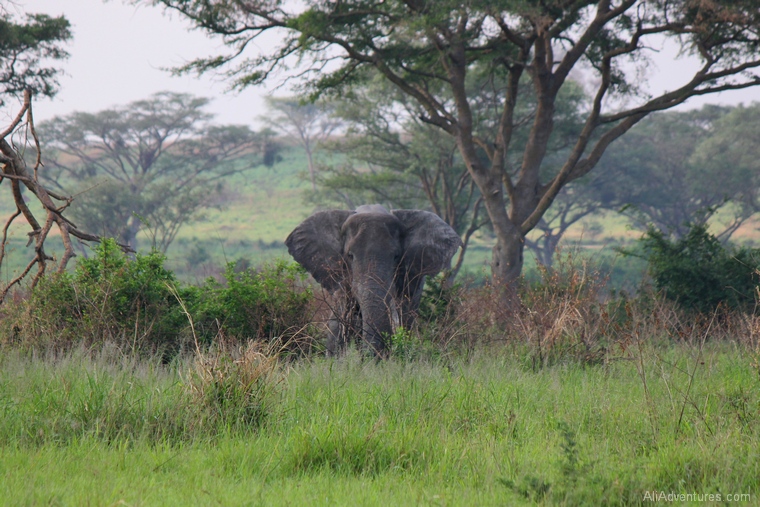 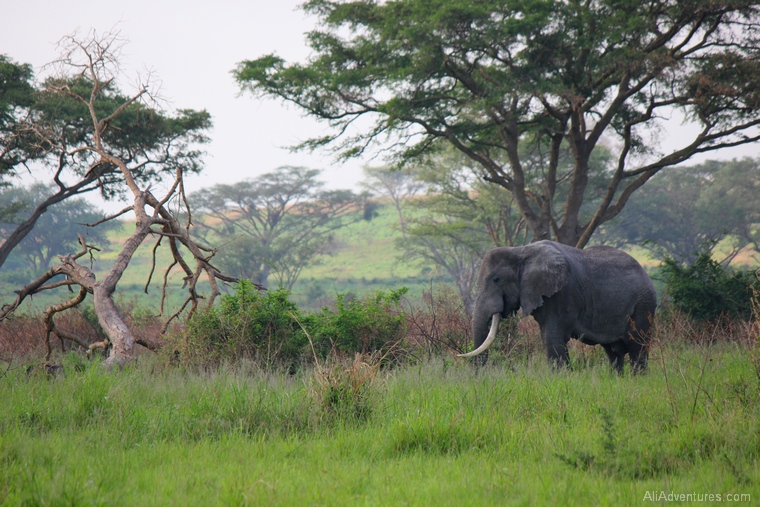 Where we stayed in Queen Elizabeth National Park in Uganda

The lodge where Katie and I stayed in the southern part of Queen Elizabeth National Park was much better than the one in the northern section. Enjojo Lodge faced into the park, and we were told that sometimes elephants wandered over to drink from the water at the edge of the property. The food here was excellent, too.

Our room was sort of a cottage or hut, and it could’ve slept four people. It had a nice outdoor porch where we could relax after lunch while waiting for time to leave for our game drive. The bathroom was huge, with an outdoor shower. Which I know sounds a little weird, but it was totally private and actually really wonderful to use as the sun went down once we returned from seeing the lions in the tree.

The other important thing to note here was that there was no internet. Our room had USB outlets, so we could charge anything that used a USB, but if we needed a normal outlet, we had to do that in the restaurant. But both of these are common enough occurrences, and honestly, I loved being disconnected from the internet for a day. 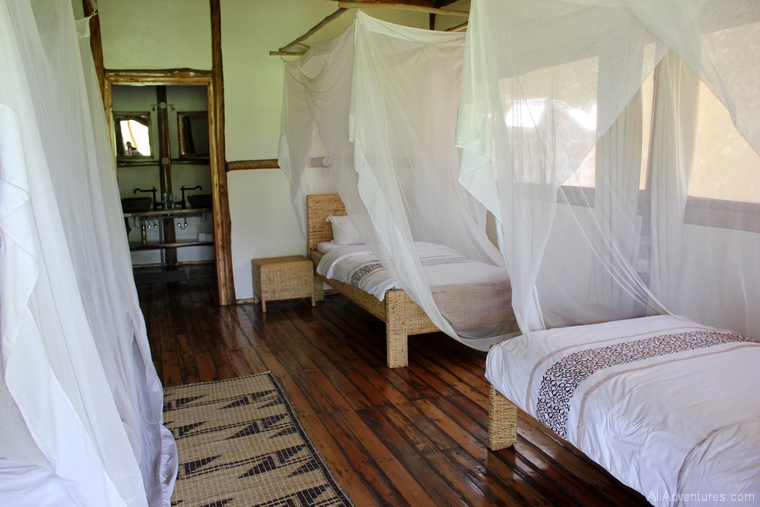 The southern part of Queen Elizabeth National Park felt much more peaceful. For some reason it seems to be less popular than the northern section, yet we saw way more animals. The landscapes were different too, with drier, dustier features in the north and greener, more lush features in the south. If you come to Uganda for a safari, don’t skip the southern section of Queen Elizabeth National Park. 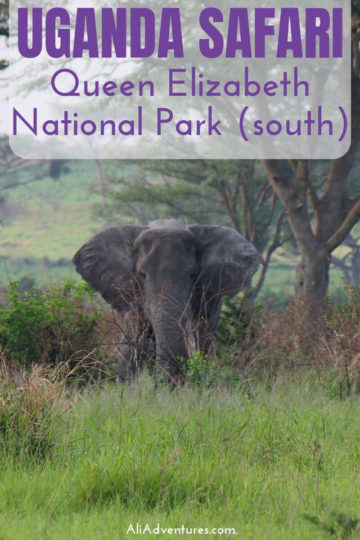