When my friend Katie messaged me to ask if I was interested in joining her in Uganda less than three months before the trip, my knee-jerk reaction was to think, no, there’s no way I can go to Uganda right now. But why not? After I took a moment to think it through, I realized my brain is somehow just wired to think “I can’t do that” to almost anything that seems a little out there. Really the only obstacle was that I’d need to leave for Uganda less than a week after returning from Spain, and that didn’t seem like enough of a reason to say no. So instead I said yes. Here’s a look at my first few days on a Uganda safari in the northern part of Queen Elizabeth Park, including videos.

After landing in Entebbe late at night, Katie and I had just a few hours to sleep before we had to be up for our our flight to Kasese near Queen Elizabeth Park. Our flight was on a Caravan, probably the smallest commercial flight I’ve ever been on. According to the Aerolink website, the plane holds up to 11 passengers, but there were just four of us that day, plus the two pilots. One of the pilots handed us a bowl of mints to pass around as refreshments.

It was fascinating watching the landscape change as we neared our destination. I was exhausted, but the flight was my first glimpse of Uganda in daylight, and my excitement began to rise. After about 45 minutes, the plane bounced onto a grass airstrip and slowed to a stop. This was where Katie and I got out, leaving the other two passengers to continue on to the next airport.

There was barely a building to greet us. There was no baggage claim – our pilot simply opened the hold and handed us our bags. A few people stood around, but I’m not sure what their jobs were since not much was needed at this tiny airport. One of the men did call around to find our guide, Peter, since we arrived much earlier than expected.

And then we were off down a bumpy road to our first lodge to check in, have lunch, and then get ready for our first game drive.

During our drive through the park, Peter pointed out animals as he saw them, often way off in the distance where we wouldn’t have noticed them on our own. This first game drive was the least exciting of the entire trip, but at least it was all uphill from here. We saw a few buffalo and a variety of animals that are in the antelope family.

While we drove around the park, we learned that Queen Elizabeth National Park was established in the 1950s, but people were living in the area that is now park land. The government allowed them to stay in their homes, but it led to a conflict of interest. The park wants to preserve the wildlife living there, but the residents want to protect their livelihood, which involves cows.

So since there are villages within the park boundaries, there have been cases of lions attacking and eating the cows. This has led to the residents retaliating by poisoning the lions, though it’s hard to prove who did it. My research came up with several incidents like this in recent years, but this article from National Geographic describes one from just last year.

Seeing the lions up close

When Katie and I were looking at quotes for our safari in Uganda, one add-on that came up was lion tracking. It cost just US$70 extra per person, and it seemed like an amazing experience worth such a small price tag.

We got up early the next morning and set off with our guide to go back to Queen Elizabeth National Park. The day before we saw almost no other vehicles, but in the morning, there were a couple dozen. But only our vehicle and three others had paid for the lion tracking, which meant we got to go off road with the researcher and get closer to the lions. Another van tried to follow us, but a ranger on a dirt bike shooed them away.

The researcher started us with the male lion. The plan was to hang out and watch him for awhile until it got hot enough for him to get up and seek shade. But he was feeling especially tired that morning and only lifted his head to look at us a bunch and rolled over several times before closing his eyes again. 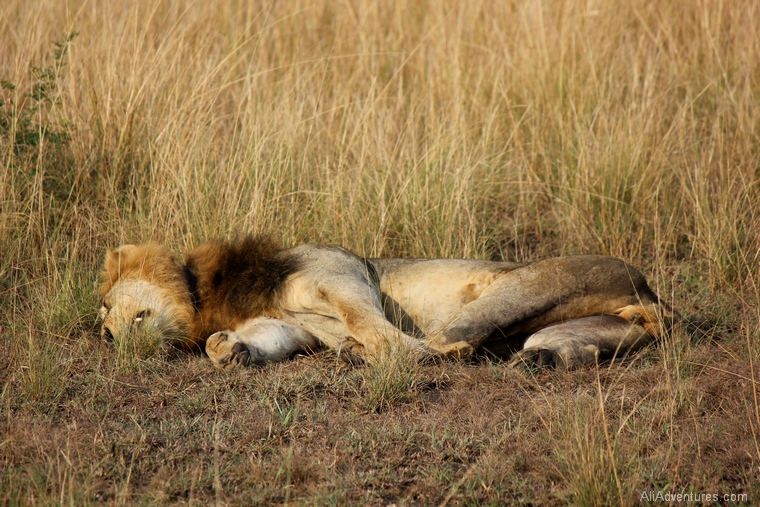 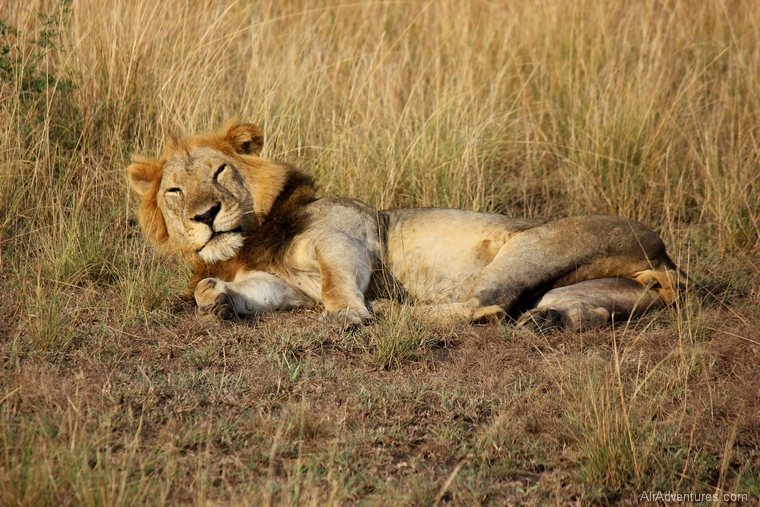 Eventually the researcher decided to take us to where some female lions should be. Two of them were lounging in a field when we arrived, and once again we all parked and admired them. It only took a few minutes for one of them to realize our vans made for a nice shady spot, and she sauntered over to relax right next to the van next to ours. 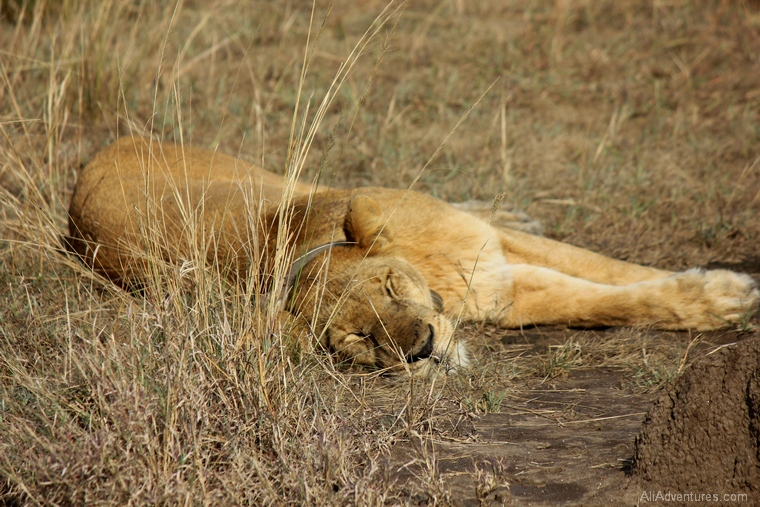 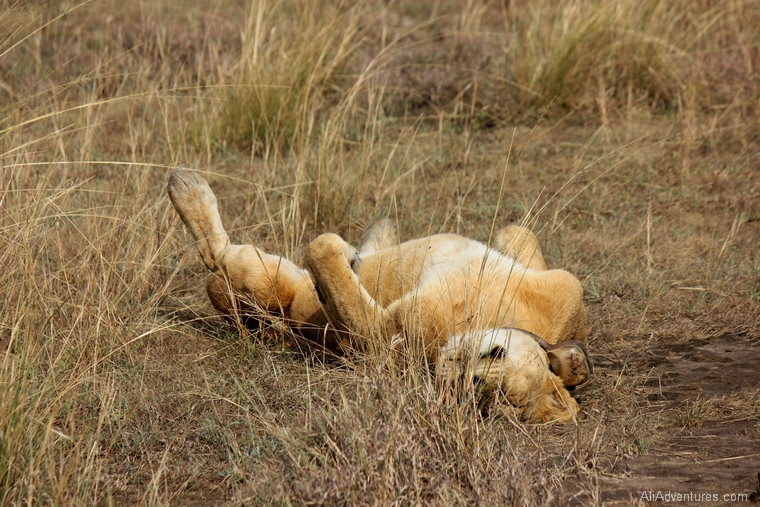 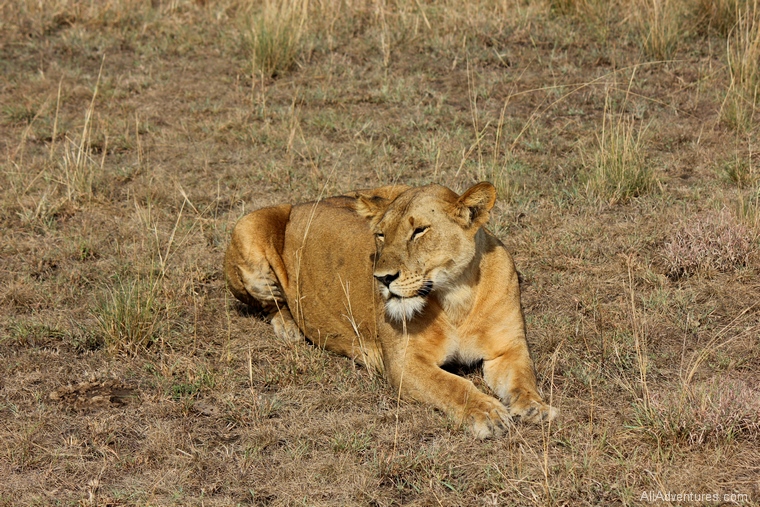 Next up we drove over to some trees the lions are known to climb. Apparently Uganda is one of the only places where lions climb trees, and it’s one of the big draws to a safari there. We saw two lions, aged 9 months and 12 months, up in the tree, just hanging out. They somehow looked incredibly uncomfortable and yet so relaxed they hardly moved. It was awesome to see. 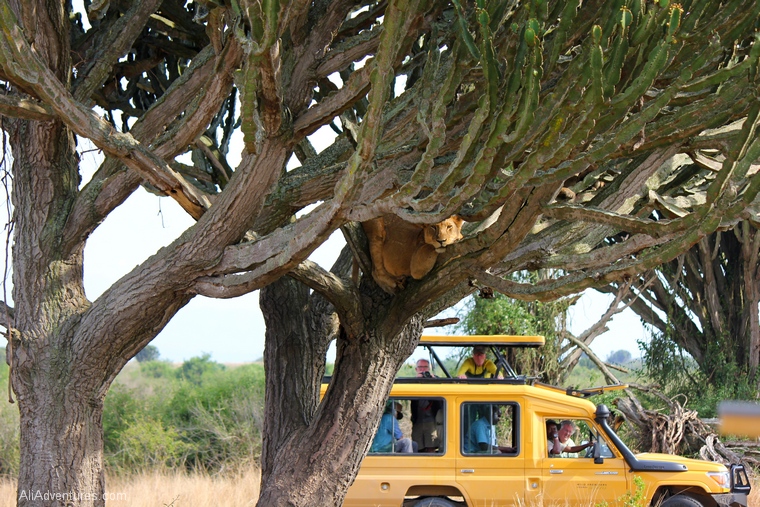 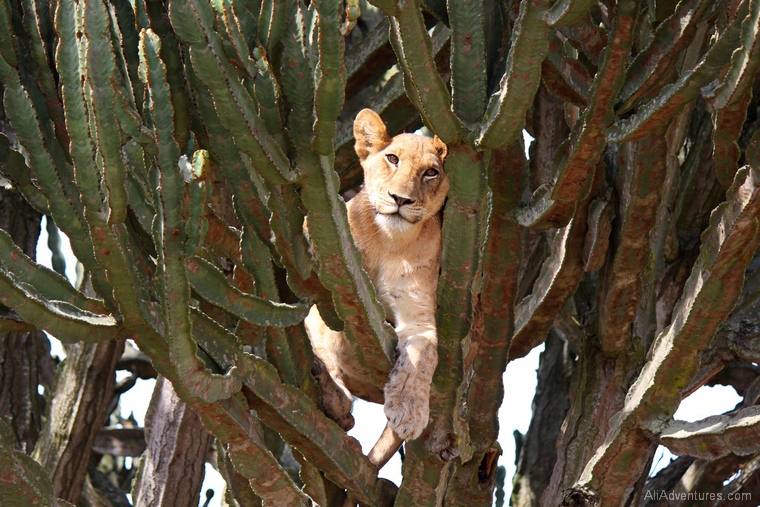 We made our way back to the male lion, and he was still basically in the same spot, despite the late morning hour and the hot sun. But we waited patiently again, and he did eventually get up and slowly walk off into the distance. 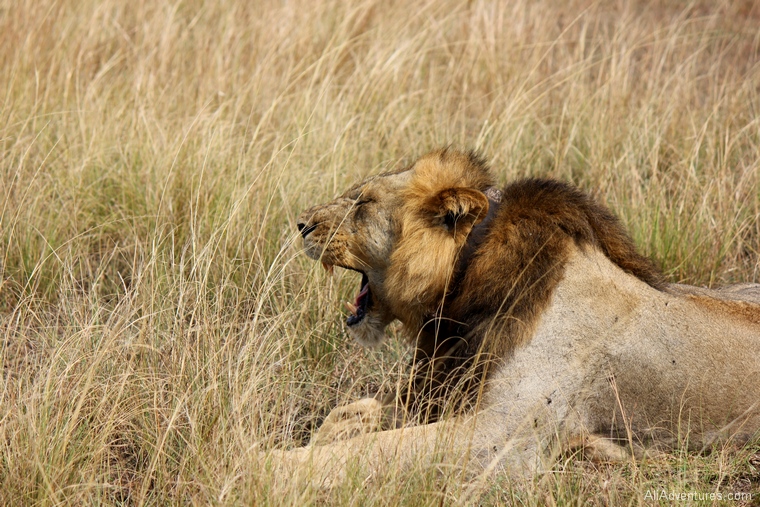 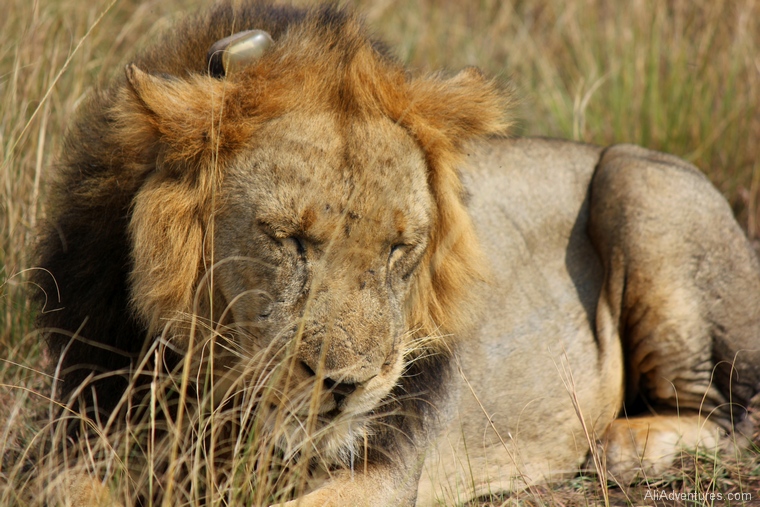 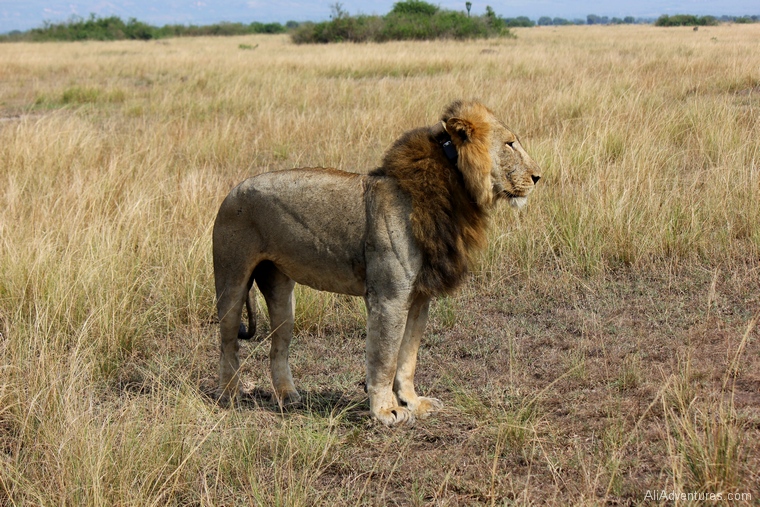 At that point Katie and I requested a return trip to the tree with the lion cubs in it, which we did. They really were fun to watch.

Seriously, if you spend the money to go to Africa for a safari, don’t skimp on extras like this one. The $70 we each spent was nothing compared to the experience we got. Check out my video and see for yourself:

I’ll be honest, Katie and I were both a little skeptical about the boat ride, but it was included in all of our quotes, so we figured it might be worth doing. It turned out to be way more interesting than we had imagined, and I’m very glad we did it.

The Kazinga Channel connects Lake Edward and Lake George and is home to many animals. The scenic boat ride along the channel lasted close to two hours, and we were close enough to the shore to clearly see the animals, but not close enough to scare them off. 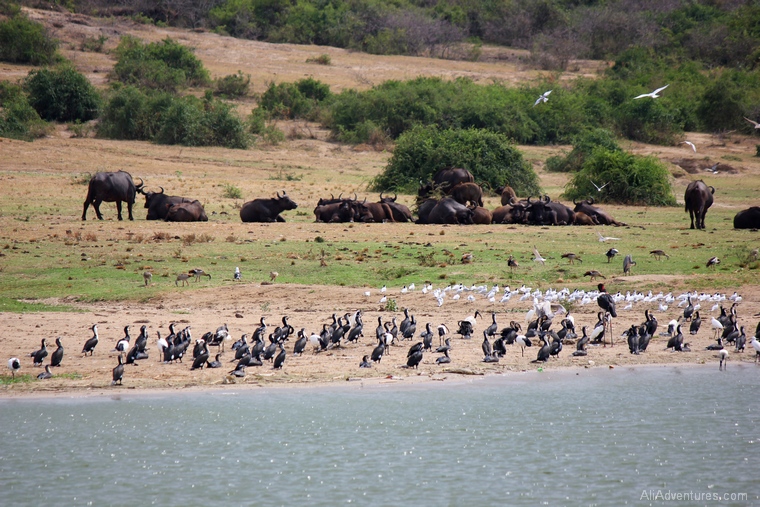 We saw more birds than I can remember, but if you’re a bird person, you’ll really enjoy that part. There were also tons of elephants, hippos, buffaloes, warthogs, and more. We even saw a few crocodiles. Many of them were just hanging out with each other, lounging in the water or eating or whatever.

I was fascinated by the sheer number of animals we saw, and how many different types. The scenic boat ride on the Kazinga Channel was a fantastic activity to add to our Uganda safari, and I’d highly recommend it.

Where we stayed near Queen Elizabeth National Park in Uganda

This wasn’t a super luxury safari, but we weren’t roughing it either. Simba Safari Camp, where we stayed at near Queen Elizabeth National Park, was probably the most basic of the whole trip, but it was still a decent place.

As with everywhere we stayed, the room had two beds, so Katie and I didn’t have to share. The beds also had mosquito nets. There was no air conditioning, so it was rather hot at night, but at least they gave us a fan. The bathroom wasn’t great but it was manageable. They provided flip flops, which we used for the shower, though in hindsight I wish I had brought my own flip flops from home.

The lodge also provided all our meals while we were there. The food was decent, but the rest of the lodges were better in this area too. Katie and I both have dietary restrictions (she has celiac disease, so she can’t eat any gluten at all, and I restrict gluten, dairy, eggs, and beans due to my colitis) and the lodge was great with customizing our meals to make sure we could eat everything. They also provided us with a boxed lunch one day, which normally would include a sandwich, but instead we got roasted chicken and potatoes, along with some fruit.

The staff were also really friendly. Overall this wasn’t a bad place, but we both agreed it was our least favorite of the trip. After arriving at our next lodge, Katie and I agreed it would’ve been better to the boat trip on our first day, instead of the game drive, that way we could’ve spent only one night in this lodge and two in the next one. 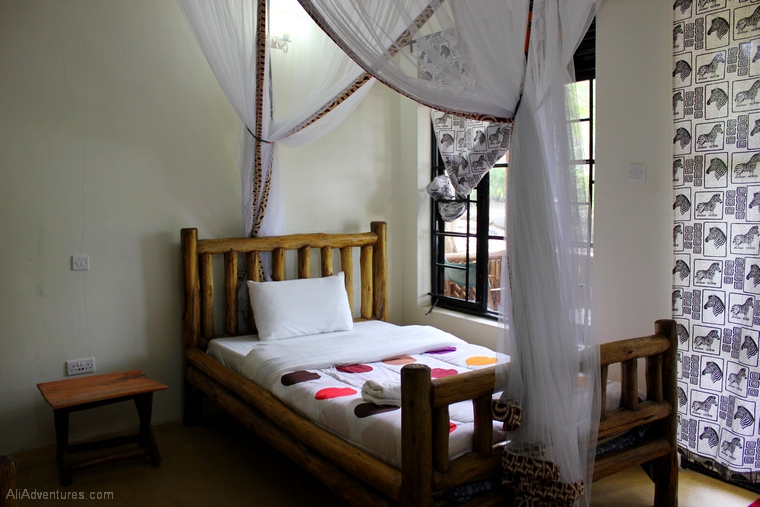 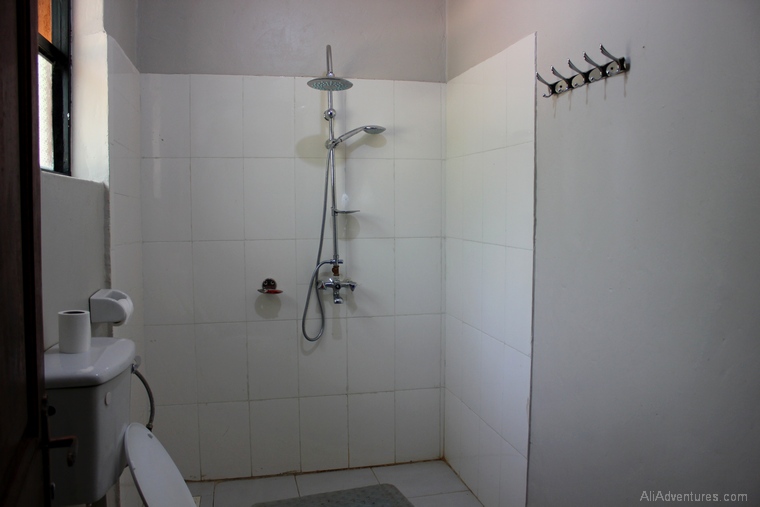 This was just the first two days of our safari in Uganda! We still had several days left and many more amazing animal encounters to experience. I went into this trip not really knowing what to expect from a Uganda safari, but it was off to a great start. 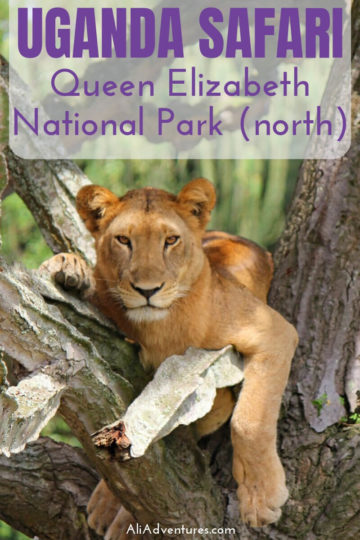 Sign Up
How Much We Spent in Alicante, Spain for One Week Uganda Safari: Queen Elizabeth Park (south)