That name alone sounds imposing, doesn’t it? Bwindi Impenetrable Forest is in the southwestern Uganda, and it was definitely tough to get to. This area is known for gorilla trekking, and since it’s a much cheaper option than neighboring Rwanda, it’s becoming a more popular choice for travelers interested in seeing gorillas up close. It was one of the main reasons Katie wanted to go to Uganda, but I opted out of gorilla trekking since you have to be in decent shape for the grueling hike, and I am not. Even still, Bwindi Impenetrable Forest was a gorgeous area to visit.

Up until this point, the roads we drove on were reasonable. Some were paved but bumpy, some were mostly dirt but still reasonably smooth considering they were dirt roads, but nothing too crazy or unexpected given where we were. This changed as we drove up into the mountains and towards our lodge in Bwindi Impenetrable Forest.

The roads began to deteriorate and became less and less like a road and more like a mud trail barely suitable for vehicles. Instead of moderate bumpiness that can easily be ignored, we were constantly jostled around for hours while our guide Peter drove the safari van at a snail’s pace.

Occasionally another vehicle same from the other direction and everyone had to slow down even more and maneuver passed each other carefully to avoid getting stuck, hitting each other, or toppling over the side and into the valley below. There were enough trees on the side of the road (well, most of the time) that I was never really afraid we’d tumble down the side, but the possibility still existed.

Peter expertly drove through and around giant muddy craters, and eventually we arrived.

The village tour wasn’t what I bargained for

As I mentioned, I decided not to sign up for gorilla trekking. I’m not in the best physical shape, and the trek can be long and difficult, depending on where the gorillas are that day. Chances seemed pretty low that it would just happen to be an easy, short hike, and it needed to be booked in advance, so I skipped it.

But I didn’t want to have nothing to do that day, so our tour agency provided me with a list of alternative activities in the area. Some still involved difficult hikes that I knew my weak muscles couldn’t handle, so I settled on a village tour. It was supposed to be a cultural tour of a local village, and it sounded pretty low key. Here’s the description:

“Today is dedicated for a Batwa experience where the Batwa demonstrate hunting techniques, gather honey, point out medicinal plants and demonstrate how to make bamboo cups. Women of the community perform a sorrowful song which echoes and leaves guests with a moving sense of
the richness of this fading culture.”

What actually ended up happening was much different, and I felt like some vital information was left out.

I still ended up hiking

A guide met me in the morning after breakfast and we started walking away from the lodge. Quickly we came to a dirt path just barely wider than my two feet, and the guide began the steep hike downward. I hesitated, very nervous about the extreme steepness of this path, and knowing that what goes down must come back up.

Again I’ll remind you, I’m not in great shape. I told the guide this, but I got the feeling that he didn’t really comprehend the concept of someone not being able to handle the trails he walked up and down multiple times every single day simply to live his life. So I gave it a go.

This path was STEEP. And a bit wet. I kept slipping, and my leg muscles strained to keep my body upright despite the severe angles of the path. We reached sections that were a vertical incline, and the guide had to grab my arm and pull me up. I was in tears.

At one point he stopped and looked down at my ankles and asked if I had long socks to tuck my pants into in order to minimize painful ant bites. I had purposely worn my jeans that day because it was a nice break from my nylon safari pants, and I was expecting a wander through a village, not a trek through cliffs and jungles. My long socks were back in my bag, waiting for the day on our itinerary labeled “walking safari.” My jeans were absolutely the wrong choice for this so-called village tour, at this point covered in mud almost up to my knees.

I did my best to tuck my jeans into my short socks, and we trudged on. Eventually we came to a tiny space where a local pygmy family started demonstrating how they start a fire and did a song and dance, all the while expecting a tip. I felt extremely awkward, especially since I was the only person on this tour.

Our next stop was the office of the company my guide worked for, and I was asked to sign a guest book and leave a review. For a tour I hadn’t really taken yet. Um, sure.

Then my guide started telling me more about what was on our schedule, none of which sounded like that description above, but did involve a visit to a local orphanage. Alarm bells started blaring in my head, and the hesitation I previously had about this tour became a full-blown panic. I’ve read so many things about how bad orphanage tourism is, and I didn’t want to contribute to it.

At this point, I explained to my guide that I was done. I was in pain from the steep up and down hiking, it was now blazing hot, and visiting an orphanage was something I refused to do. Once I finally got him to understand that I wanted to go back to the lodge, we started walking back, along the road this time.

The road was better, but still a very steep uphill climb, and now with the equatorial sun burning down on me. I asked if he could call my lodge (yes, he had a cell phone) and see if someone could drive down and pick me up. No, he said, no one up there had a vehicle to pick me up. I’m not sure I believed him since I saw a vehicle with the lodge name on it, but fine. We kept walking.

I had to keep stopping frequently, and decided to try another angle. We had just passed a friend of his who had a motorbike, so I asked, “boda-boda?” which is Uganda slang for motorbike. The guide yelled across the valley to his friend, told me it would cost me the equivalent of about $1.30, and a minute later, I hopped on the back of this guy’s bike. Money well spent.

Meanwhile, Katie was enjoying her gorilla trekking. She confirmed that the hike probably would’ve been too much for me, and after the morning I had, I was even more glad I hadn’t shelled out $600 for gorilla trekking. Cutting it short and going back to the lodge would not have been an option for me, like I managed to do on the village tour.

Maybe I’ll return someday. Maybe not. I’m trying not to put so much pressure on every single travel experience because that once-in-a-lifetime thing usually results in disappointment. Plus, as amazing as it sounded, gorillas were never high on my list of animals I wanted to see in Africa.

If you’d like to see Katie’s gorilla pictures, check them out on her blog Facebook page about halfway through her Uganda photo album here.

Where we stayed in Bwindi Impenetrable Forest

Katie and I spent two nights in Bwindi Impenetrable Forest at Rushaga Gorilla Camp in a luxury tent. But “tent” isn’t a good enough word to describe it really. It was basically a hut with a solid floor and normal walls, except for one wall that was made of thick canvas.

The bathroom was huge, but one complaint we had about it was that it had windows on the wall between the bathroom and the main room. They had some meshy material that could be rolled down to cover them for privacy, but they were still see-through enough to totally see the other person in the bathroom. So we had to make due with just not looking that way when the other person was in there. The outdoor porch was a good escape during shower time.

The hotel’s restaurant was pretty good. Electricity worked fine most of the time, though it did go out a few times, which is to be expected in such a remote area. WiFi worked sometimes, but not consistently. Again, this is a pretty normal thing for the area, so expect to be mostly without internet no matter where you stay.

Bwindi Impenetrable Forest is at a high enough elevation that we didn’t have to worry about mosquitoes, so we had a little break from sleeping under mosquito netting, which was nice. Overall this was a nice lodge, and I’d stay there again if I ever return. 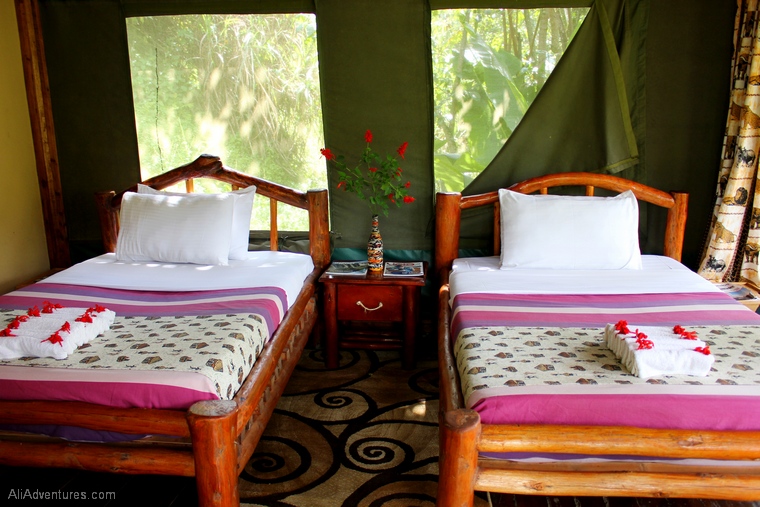 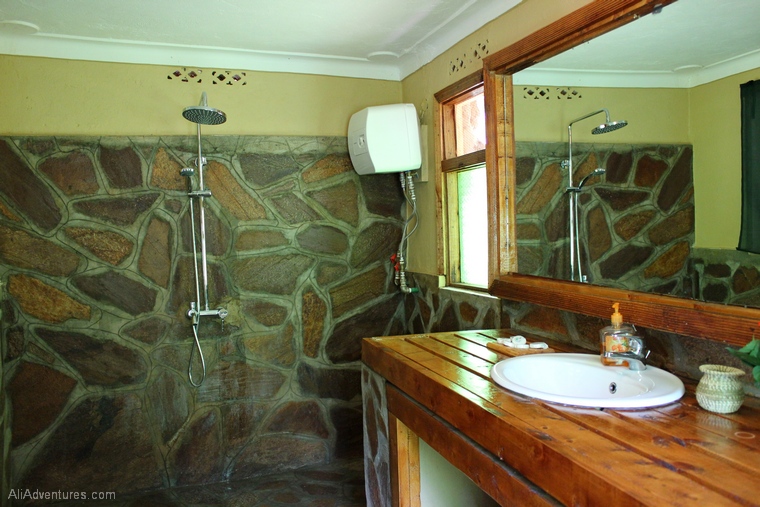 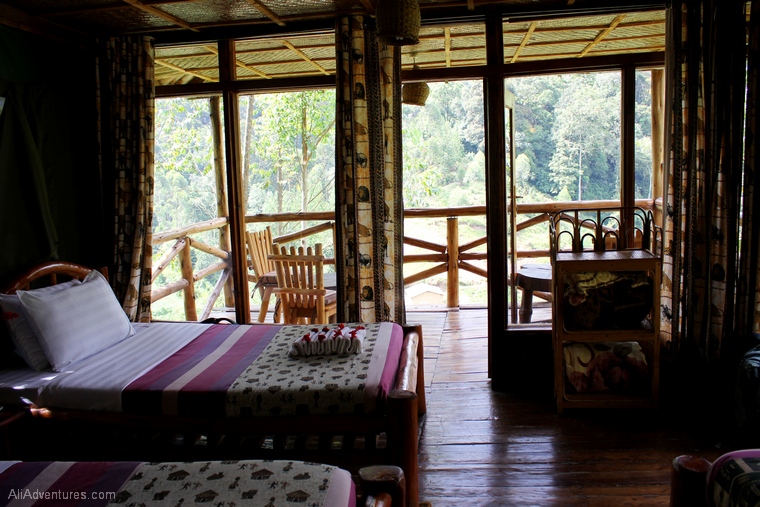 I really did enjoy seeing this region of Uganda and Bwindi Impenetrable Forest. I wish my tour had gone better, and at the very least I wish I had been given accurate information about it ahead of time, but at least I can laugh about it now. Katie enjoyed seeing gorillas, and this is definitely a wonderful place for gorilla trekking. If you come to Uganda, don’t skip Bwindi Impenetrable Forest.