Those Belgians Have a Sense of Humor

I never really thought of Belgium as a country of humor, but I saw it everywhere when we were in Brussels. I expected a few laughs from the peeing statues, but I was surprised at how many other things made me smile, giggle or just stare in disbelief. From comics to parks to food, the humor was everywhere. Luckily I love taking photos so I can share some of the laughs with you.

I don’t think these were meant to be funny, but I got a laugh so I had to take a picture. Like the Chinese restaurant sign advertising one item I’d rather not taste. 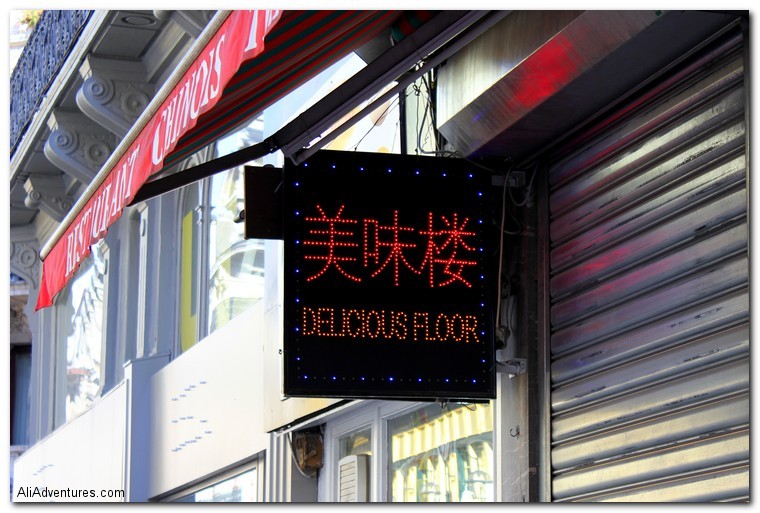 I really don’t know what this one is. We saw this odd statue in front of a store while we were walking down the street, and there really are no words. 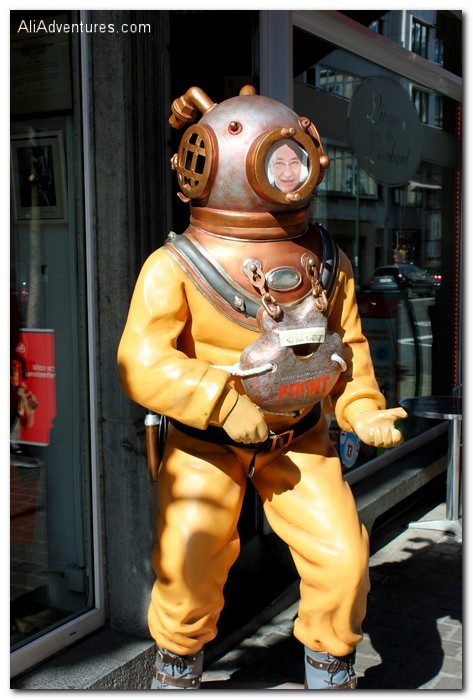 This funny sculpture was one of the first things I saw on our tour. It’s a cat on a bike, and it turns out it cost 100,000€. Maybe not so funny once you know how expensive it was. 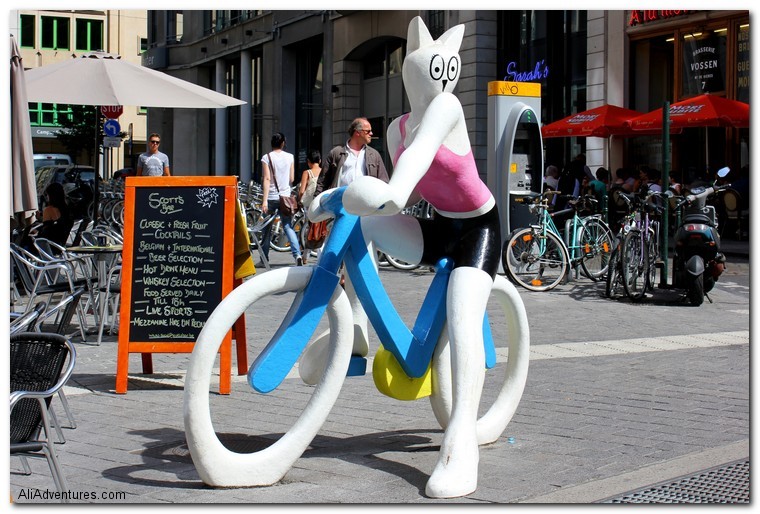 Brussels knows it’s famous for a lot of food, and someone obviously decided to play this up. In the park across the street from the Royal Palace we saw several pieces of art depicting well-known Belgian food. And at least a few of them are for sale, though I can’t imagine how much one would cost or what you might do with such a large purchase.

There were several sculptures of fries, including one that actually had people’s legs sticking out of it instead of fries. 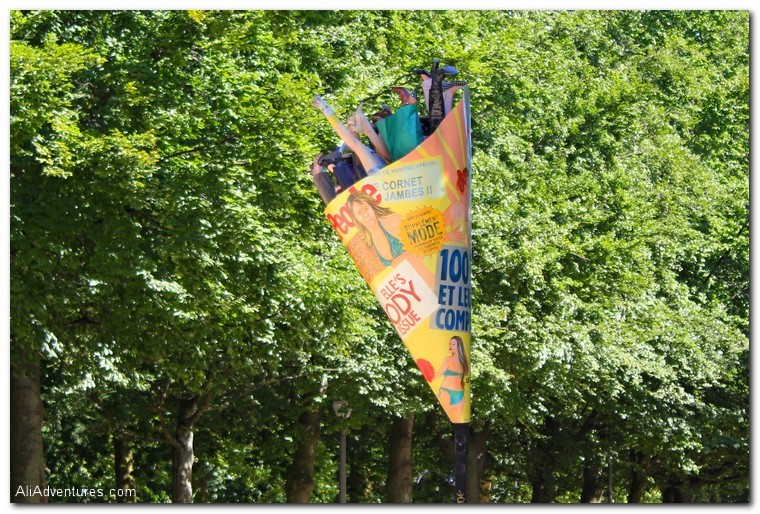 Then of course there were chocolate sculptures, one in the colors of Belgium’s flag. 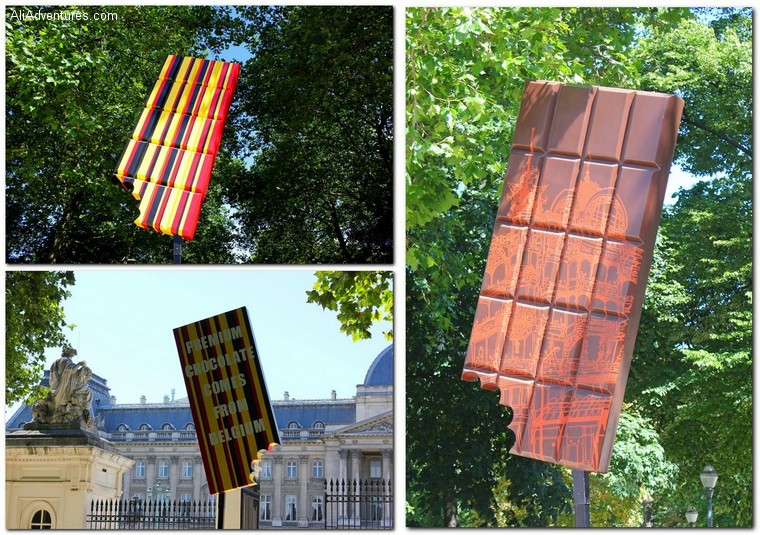 And the sculptures of beer, Brussels sprouts, and a mussel with a waffle inside of it. 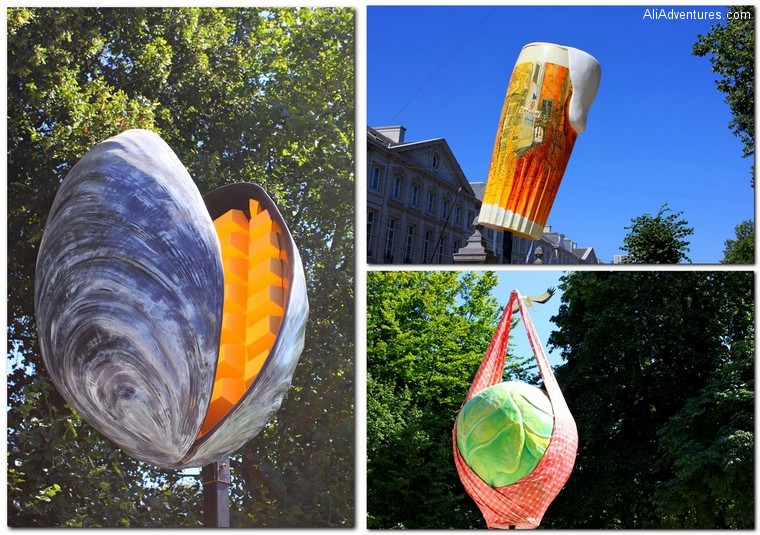 Many famous comics are from Belgium, although the most famous one to make it across the pond to the US are the Smurfs. The name changed a bit when it was translated into English, but the characters are still recognizable. (Apologies for the slightly blurry photos, three of these were taken through a glass window.) 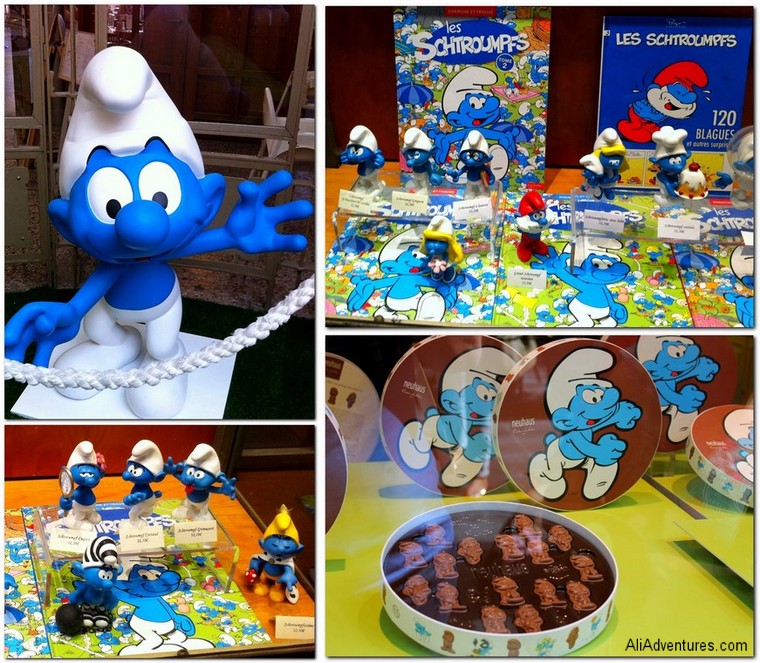 Brussels has a really great Comics Center where you can see the history of comics through temporary and permanent displays. Since Belgium has more comic artists per square kilometer than any other country in the world, the comics center has become one of the most popular places to visit in Brussels.

Belgien Tourismus arranged for us to have a private lesson on drawing comics. Now, I can’t draw to save my life, so even with the step-by-step instructions on how to make a character look like he was walking, I was still struggling. Andy, on the other hand, was like a kid in a candy shop. This was his favorite part of our weekend, and he even won a book for having the best drawing in our group. You can read about his thoughts (and see his winning drawing) on the Comics Center here. 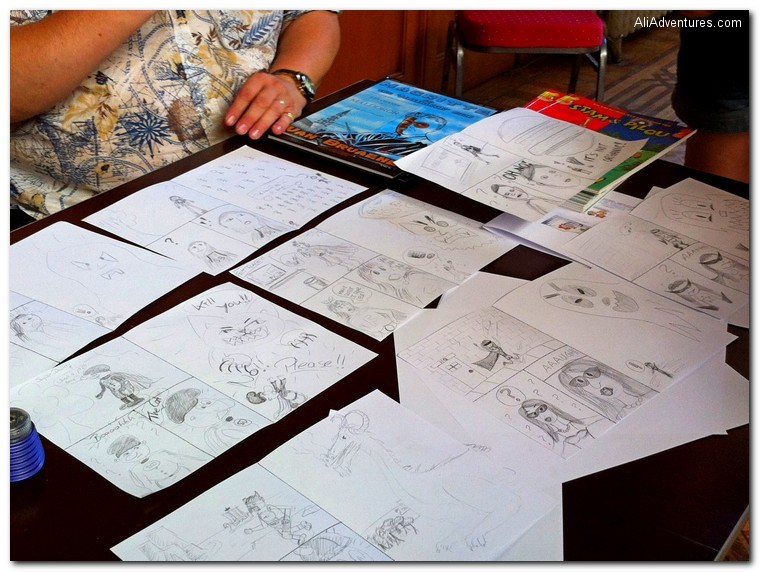 My comic was Super Backpacker, who battles against a tour bus filled with tourists who are ripping their way through 15 countries in 10 days. Our instructor said he had never seen anyone make a tour bus into a villain. Clearly a career involving drawing is not in my future. 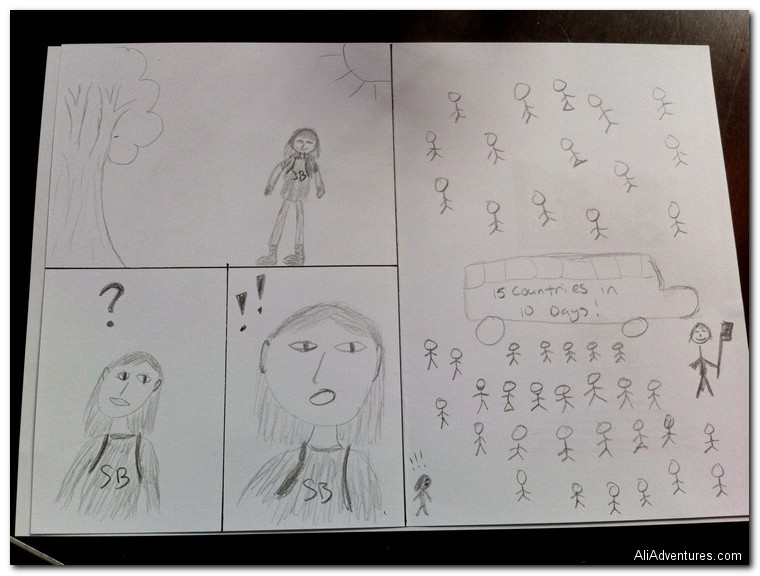 It turns out Brussels is not only a city of culture, good food and beer, but a city humor as well. Their sense of humor was everywhere, and you couldn’t avoid it if you wanted to. Just take a stroll down the street or through a park, and the laughs will be right there waiting for you.

Thank you to Belgien Tourismus for hosting us! All opinions and bad drawing skills are my own.