Many of us can relate to getting up every day and doing the same things we did the day before. Shower, drive to work, eat breakfast at your desk, fake-smile through the small talk and the buzz words.

Maybe you drift off and daydream about that trip you want to take but think you can’t get enough time off.

Maybe you think about how you once wanted to do something creative or have an amazingly fulfilling career, but instead you’re pushing papers in a cubicle.

Maybe you dream about moving overseas and traveling around Europe, but the idea seems so farfetched you dismiss it as impossible.

My friend Kim lived in Portland for several years with her husband, Brian, and she worked at a comfortable job. It wasn’t a bad job, but she didn’t feel like she was fulfilling her life’s purpose. It gnawed at her from the back of her mind, but she wouldn’t acknowledge it.

Then one day on her daily run, those thoughts broke through to the surface. She could ignore it no longer: Kim wanted to be a writer and to see the world. She wanted more from life than the daily routine she could see stretching out in front of her for the next few decades if she didn’t change something soon.

The decision to travel

Eventually Kim and Brian decided to make a drastic change. They sold their belongings, their house, their car, and after months and months of saving, they were ready to leave their jobs behind and travel the world. Kim was going to use the experiences to become a writer, her true passion.

But before they could leave, a couple they were friends with gave them a gift. It was a yellow envelope that contained a heartfelt letter and money to be distributed along the way as Kim and Brian explored new places. There were three simple rules for giving away the money, but basically it was up to Kim and Brian to decide how, when, and where they gave. It was one small way to spread kindness into the world.

Kim and Brian boarded a plane for Quito, Ecuador without really knowing what was in store for them. Giving away the money turned out to be harder and more awkward than Kim imagined, but it also opened her up to experiences she wouldn’t have had otherwise.

A book is born 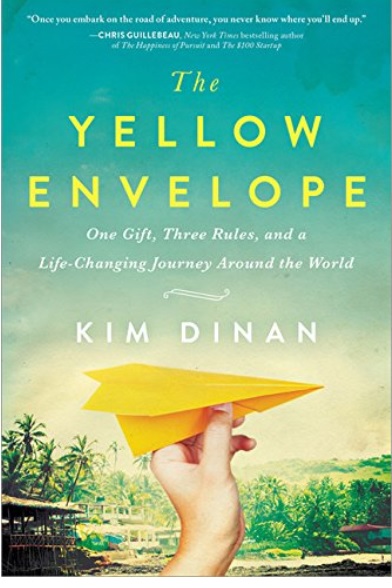 Kim’s book, The Yellow Envelope, tells the story of how Kim came to realize she needed a change in her life and how they ended up leaving their comfort zone to travel. It tells of their experiences, both good and bad. The book also dives into how travel affected their relationship with each other and how Kim was changing as a person.

It was much deeper than the travel memoir I expected when I started reading it, especially since I’ve met Kim and Brian several times and they’ve even stayed at our place a couple times. There were stories I never heard before, stories that weren’t on Kim’s blog, So Many Places.

This was one of the best travel memoirs I’ve read because it was so different. Yes, there’s descriptions of the places and the travel-related experiences, like Kim’s journey driving a rickshaw across India with two other women. But there’s a lot more depth to the book. This was not a frivolous fling around the world. It is a story about how travel and the people you meet along the way can change you.

Kim decided she was on the wrong path and changed directions. She could’ve kept going, because that’s what was expected of her, but she made a turn instead. Following her passion along a bumpy road led to great things. I encourage you to pick up a copy of this book, not only for the entertaining stories, but for the inspiration to take a chance and go after what you really want.

>>Pick up a copy of The Yellow Envelope on Amazon today!

I was provided a free copy of Kim’s book by the publisher, but all opinions and decisions to read the book twice are my own.