The last stop on my Cyprus trip was Paphos, another pretty beach town along the southern coast of the island. It was probably the most touristy city I visited, but I still really liked it. The crowds weren’t so bad, but I imagine in the high season there are many more people there. I only had one night, but I packed in as much as I could.

My top priority while in Paphos was to visit the ruins of the Tombs of Kings. I arrived in Paphos from Limassol around lunchtime, so after eating and checking into my hotel, I hopped on the bus to see the ruins. It turns out these tombs didn’t actually hold the remains of kings, but of other wealthy people from the area. After paying my entry fee, I met a Canadian woman who lives in Dubai, another solo traveler, so we explored the ruins together. 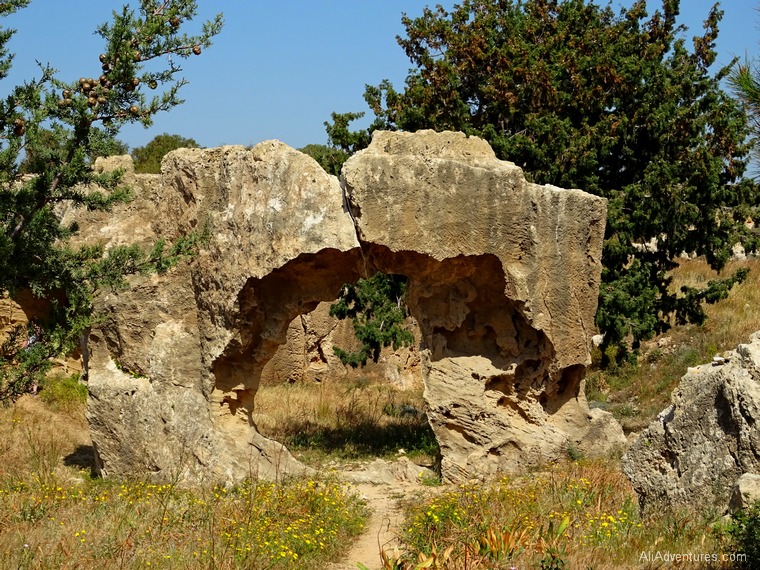 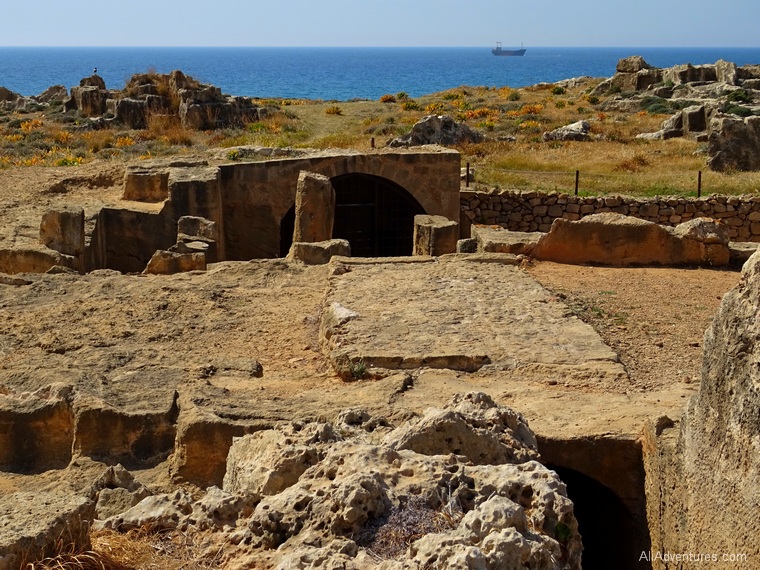 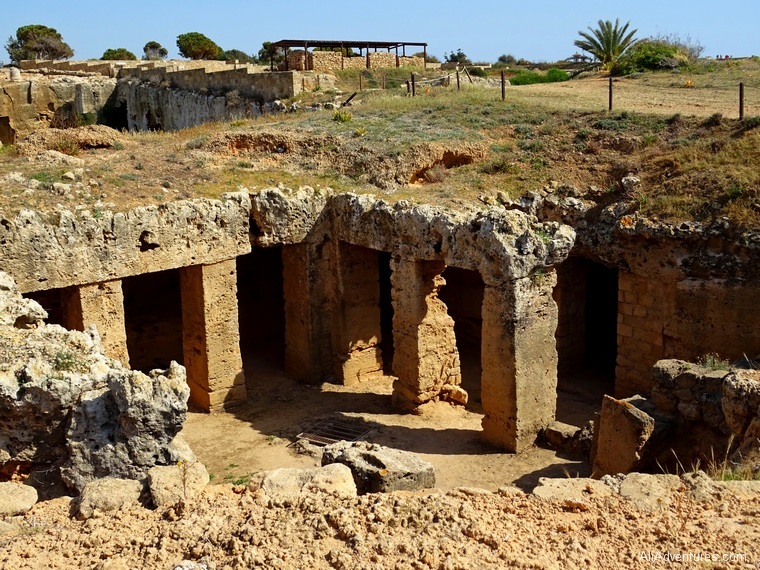 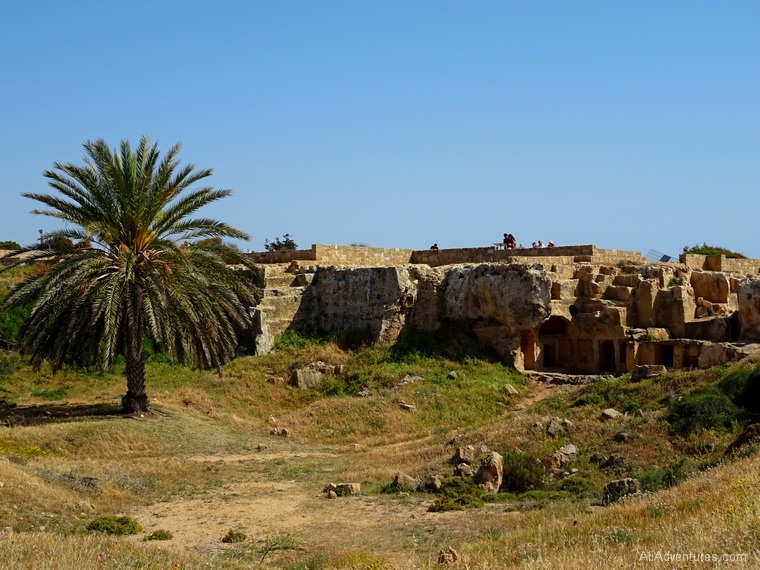 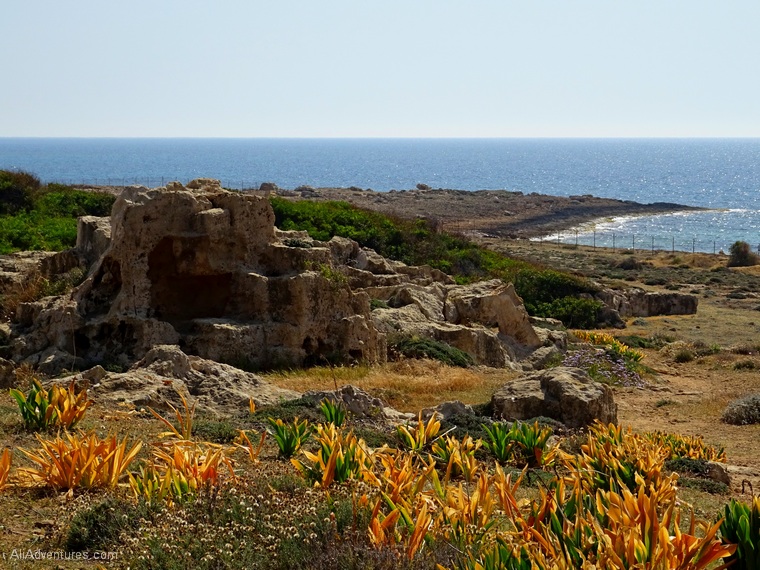 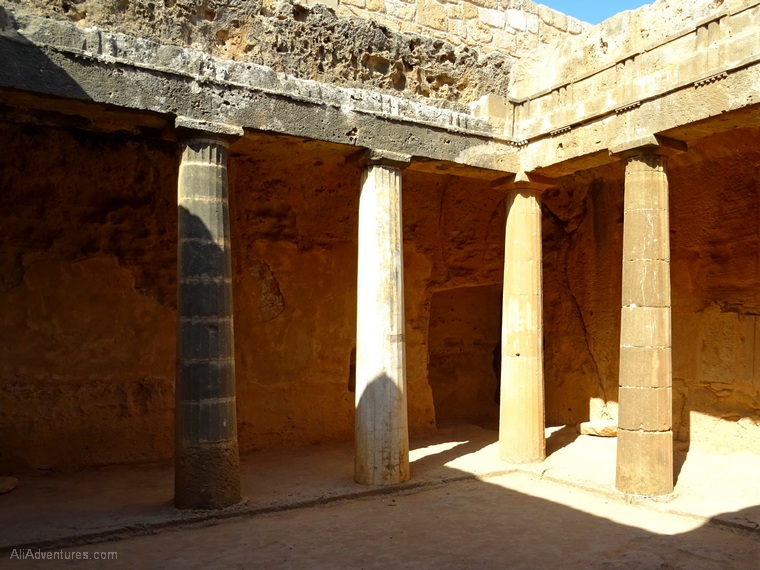 The other big attraction and UNESCO site in Paphos is the archeological park, but I got there too late in the day to see it after I was done at the Tombs of Kings. Luckily my flight home the next day wasn’t until early afternoon.

It turns out Selena from Oh, the Places We Will Go! was in Paphos at the same time, so she and her husband picked me up at the Starbucks near my hotel in the morning, and the three of us explored some more ruins and many tile mosaics. 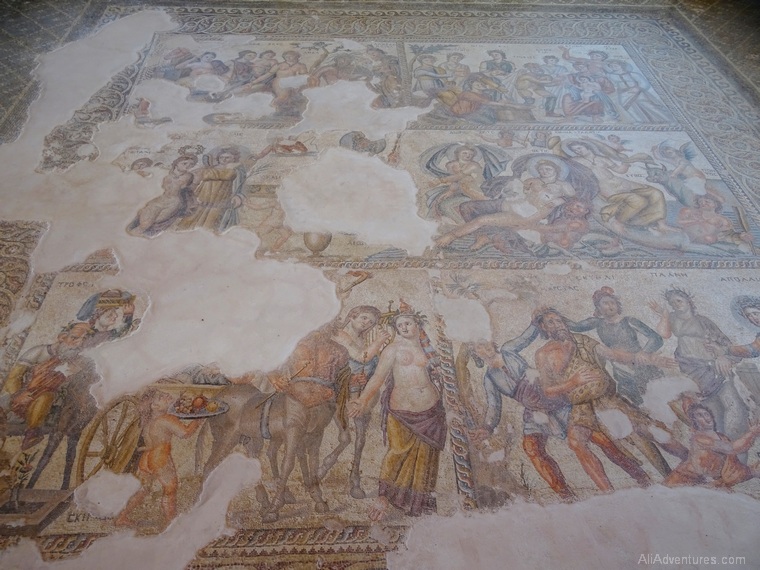 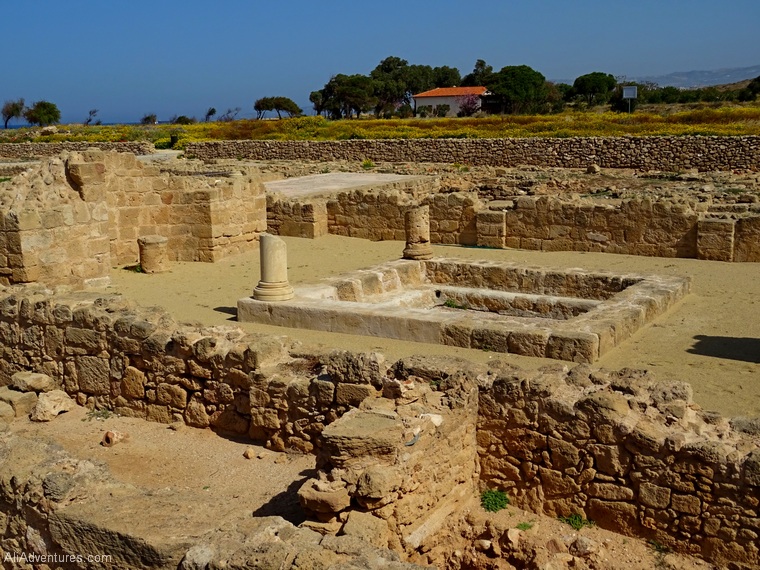 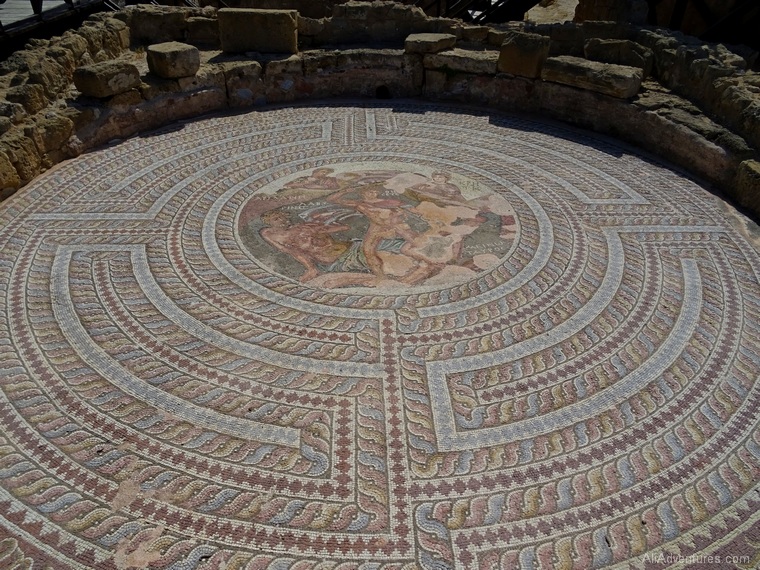 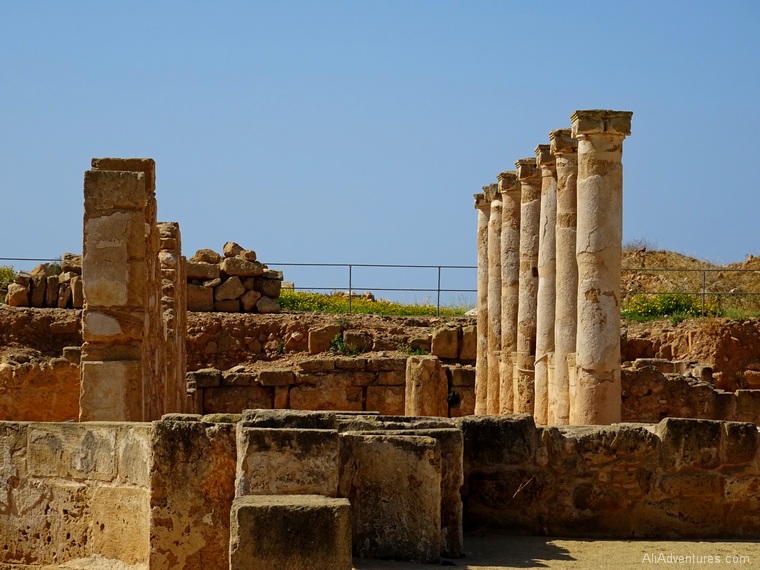 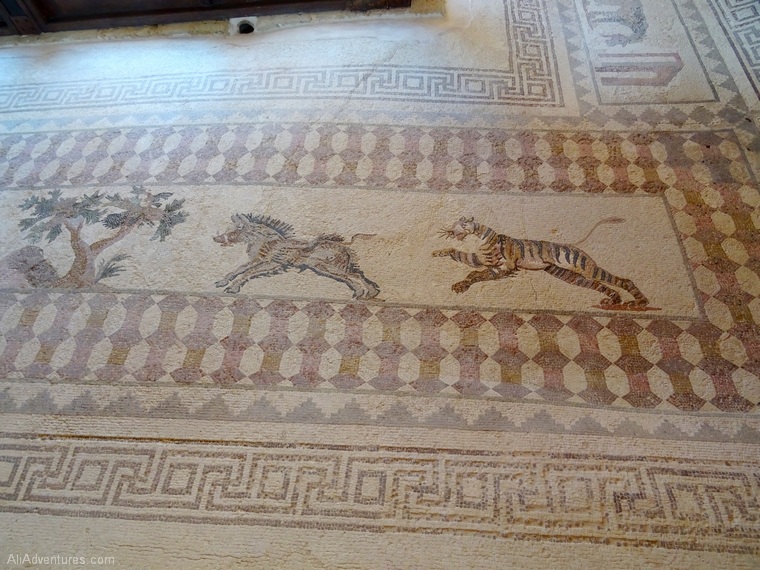 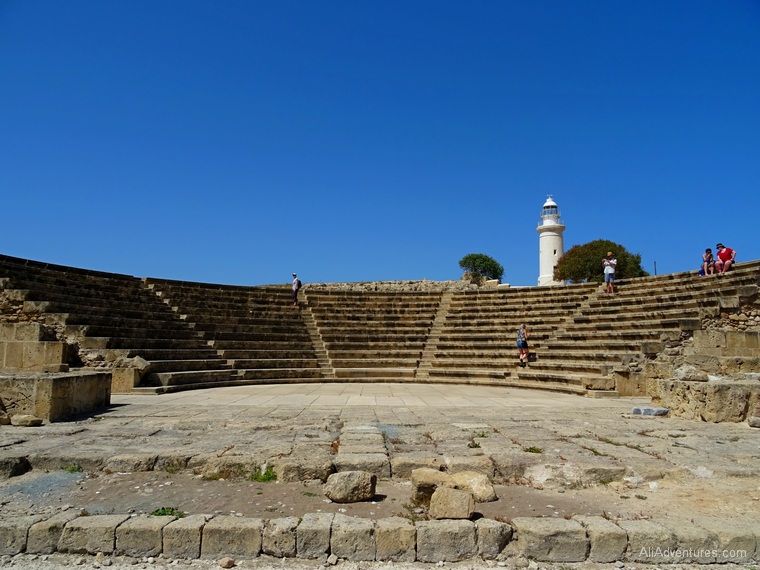 I knew there was a small castle in Paphos, and I could see it off in the distance when I was at the Tombs of Kings. But someone told me it was just some ruins and you couldn’t even go inside. But Selena knew better. After the three of us got lunch, we wandered over to the castle, just a short distance from the archeological park.

No, it’s not a super impressive castle. But you can go in, it’s a museum, and it has roof access for views of the town and the sea. We didn’t have much time, so we paid for our tickets, skipped the museum section, and went up top. 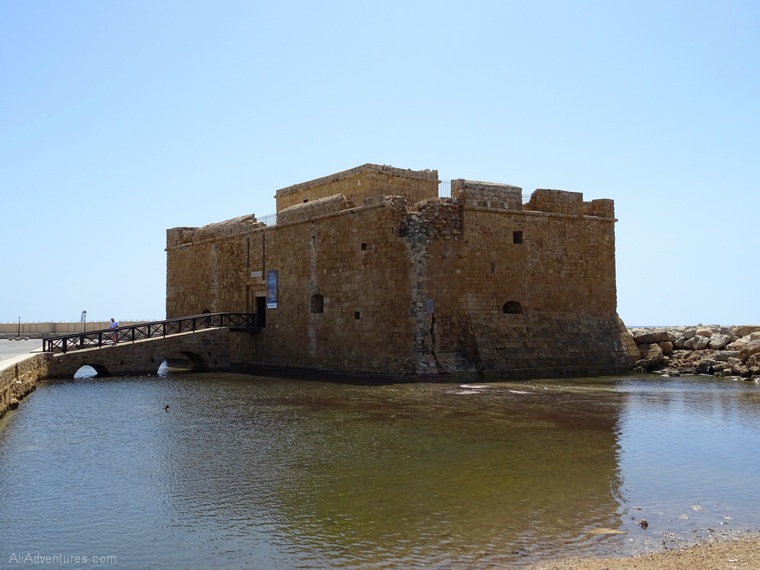 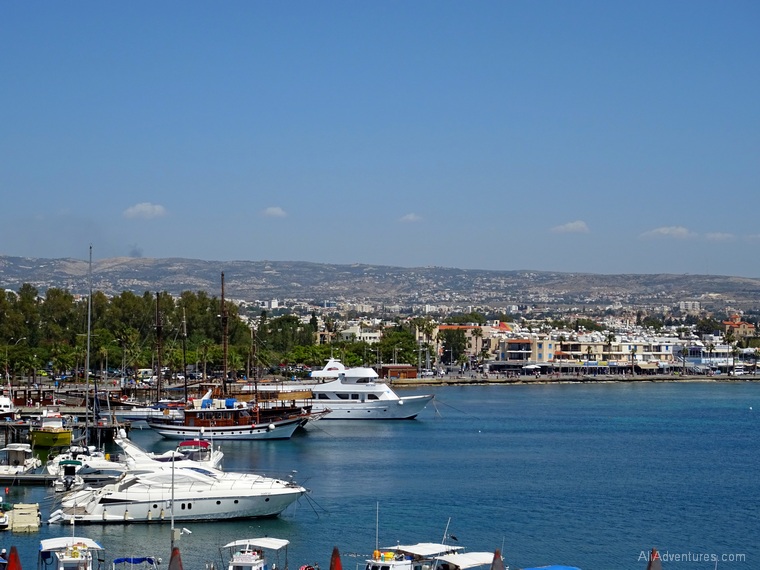 Where to stay in Paphos, Cyprus

I booked one night at Hotel Anemi Apartments which was about a 10 minute walk from the archeological park and the main bus station near the waterfront. (There’s another main bus station in the northern part of town, which is where long distances routes start and end.) The hotel isn’t right on the water but it’s only a block away.

The hotel had a nice pool, and while it was a bit windy the day I sat out there, I could see how it would be a nice place on a warmer day.

Also, the curtains…you don’t understand how important thick, dark curtains are to me. They were the best of all the hotels on this trip, and it was soooo nice to not get woken up early by the sun.

The staff were really helpful with all my questions and gave me the bus schedule to get to the Paphos Airport. (But thanks to Selena and her husband for driving me there instead!) It was a hotel with kitchenettes, and for some reason they upgraded me. I was supposed to get a studio, but I ended up with a one bedroom. It was kind of a shame I was only there for one night.

I paid just under 50 euros for one night, which was an incredible price even before the upgrade. 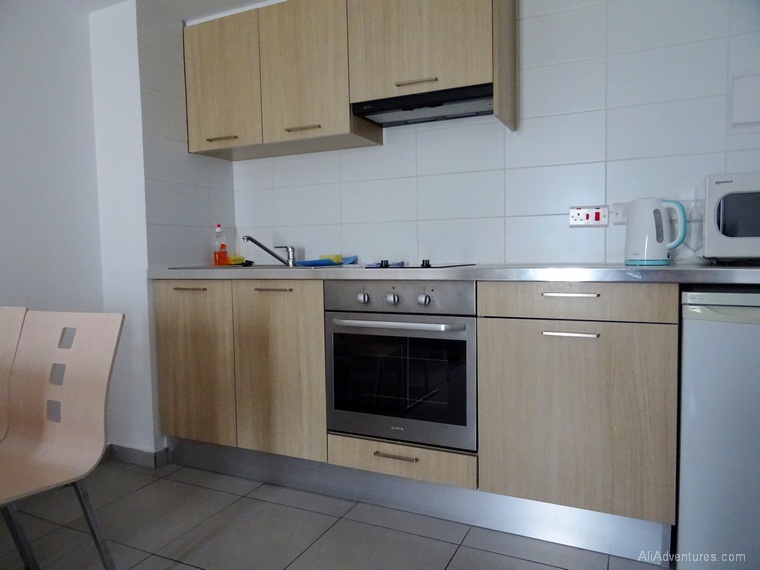 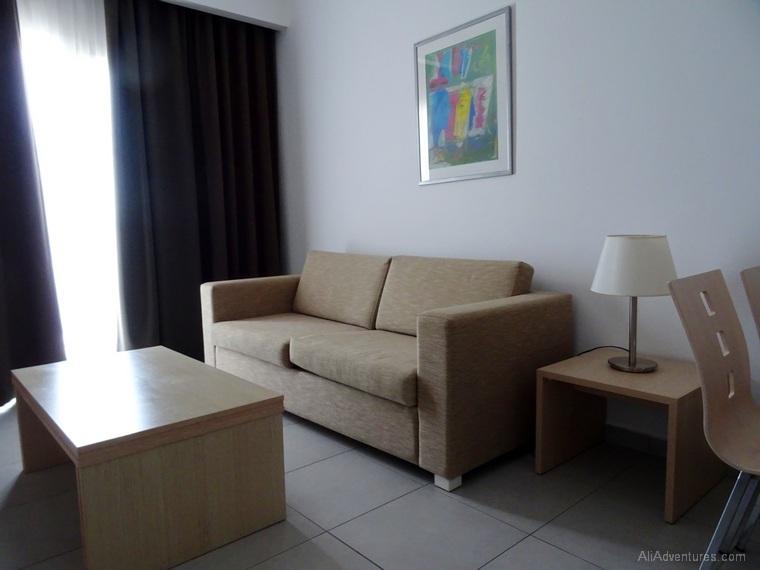 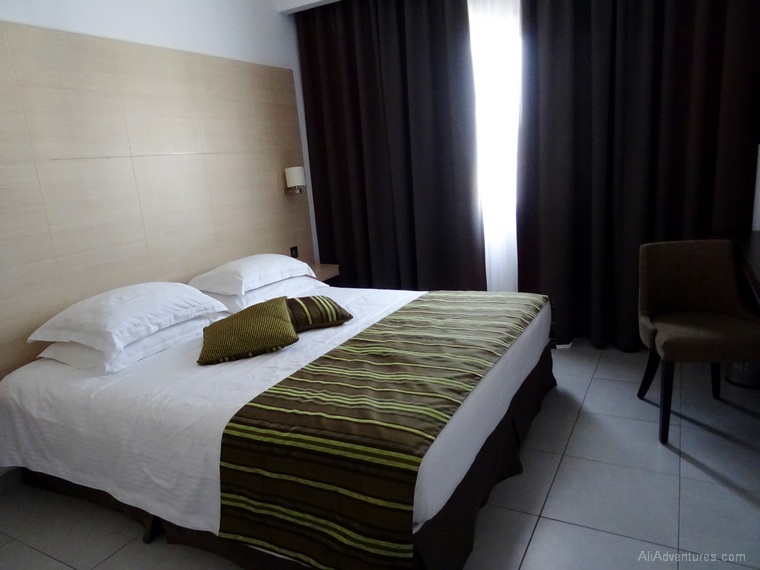 And that was the end of my escape to Cyprus. I really enjoyed the country (or countries if you want to count the north and south separately) and I wish I had more time to see other places I couldn’t get to on this trip. Definitely a great place for beautiful scenery, historical ruins, interesting current events, and relaxing beaches.

Sign Up
Scenes from Limassol, Cyprus How Much I Spent Traveling in Cyprus and Northern Cyprus