How a Hockey Game in Berlin Surprised Me

I really wasn’t going to write about this. Andy and I decided to go to a hockey game in Berlin, and we finally bought tickets for last Friday night. My dad and I used to get half season tickets for the Atlanta Thrashers every year, but I hadn’t been to a game in quite a long time. I don’t know that much about the sport itself, but in general it’s not a hard game to follow and there aren’t a lot of complicated rules to keep track of. I foolishly expected attending a game in Berlin to be similar to attending one in Atlanta, and while the game itself was what I expected, the whole experience was not. As we watched the game, I was also writing this post in my head, so I just had to share.

For the most part, you will probably find more advertising throughout the US than in any other country. We certainly have advertising here in Germany, but it’s not quite so in your face or all over every available surface. So I was quite surprised by the amount of advertising at the arena. Stadiums and arenas in the US often get corporate sponsorship and have the company’s name in the name of the place, but in my opinion, this went a little further. The games are played at the O2 Arena. O2 is a cell phone company, and they had a separate entrance for O2 customers. Being O2 customers ourselves, we tried out this special line. It turns out they have the separate entrance so they can give you a little card with a number to send a text to for a chance to win two free drinks. Text messaging rates apply, of course. Get even a few dozen attendees to send in a text and they will more than earn the cost of two drinks.

I’m used to advertising on the boards around the ice, and this was the case here as well. There’s usually some advertising on the ice itself, but here they seemed to have even more. Each of the big circles on the ice (I’m sure they have an actual name but I don’t know it) had advertising filling the entire circle, as well as several logos in the center. The name of the local Berlin gas company was written in big letters behind each goal. The players jerseys had various companies advertised on them. But the one that really got me? Berlin’s team is the Eisbaren, which means polar bears. Their opponent the night we were there was the Munich Red Bulls. Yes, Red Bull the energy drink. Their helmets looked like Red Bull cans and the Red Bull logo was all over their uniform.

On the other hand, the game went much quicker because there were no commercial breaks. Each period had one “power break” that we couldn’t quite figure out. If the games are televised, maybe they just do one commercial break per period, though I can’t even find concrete evidence that every game is televised. That small difference in advertising tactics meant the game kept its pace, and instead of being there for three hours, we were leaving the arena a little more than two hours after the game started. 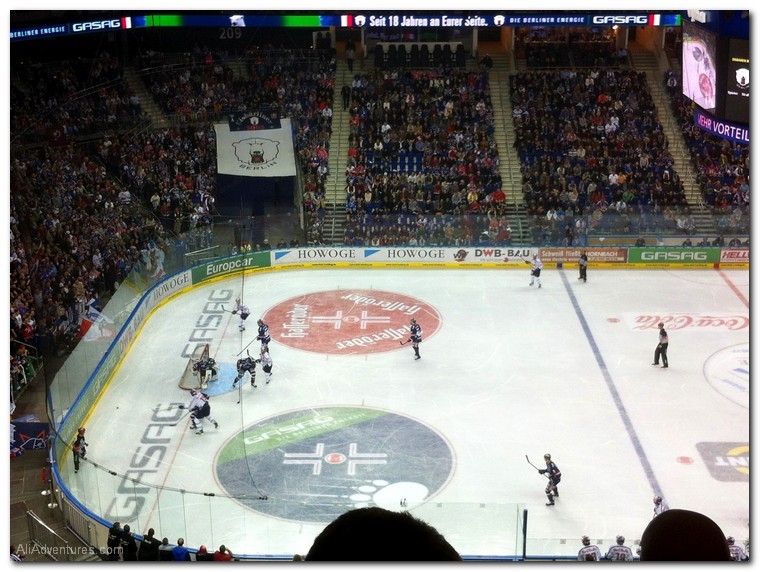 Hockey, like most professional sports, generally attracts some hardcore fans. Berlin hockey was no exception. What surprised me was how they expressed it compared with what I’m used to. The entire section behind one of the goals was a huge group of Berlin fans who chanted and sang almost nonstop. Two guys stood at the front in front of the glass banging drums, and a few other people within the group had drums. I can’t imagine arenas in the US allowing fans to come in with drums. The group waved giant flags on 12 foot flag poles in between plays. Often the group would jump up and down in unison. They were intense and dedicated and energetic, and the only time they took a break was when the team did at intermissions.

In the NHL (National Hockey League, the US/Canadian professional league) most teams have a few players from the US, a decent amount from Canada, and a large proportion from eastern and northern European countries. It’s not surprising to see Russia, Sweden, Czech Republic, Estonia, and several other cold weather nationalities represented. It was a little different at the Berlin hockey game. Many of the players’ names appeared to be either American or Canadian. One player who was interviewed (in English) during intermission was either American or Canadian. Another player, either American or Canadian, had a prerecorded video clip that played during both intermissions. It seems as though the NHL attracts the best players because they pay better than the leagues in Europe, so they end up with many Europeans. Therefore, perhaps the American players, and maybe even some Canadians, who aren’t quite good enough to get into the NHL end up going to various European countries to play.

The hockey players also fought with each other like in the NHL, but the refs were MUCH quicker to stop them. In the NHL they will let them fight for a few seconds at least before jumping in to try to keep things from getting out of hand. Not so here. They were taking half the fun out of the game, but in the long run I’m sure it’s just better for the players to not punch each other in the face. 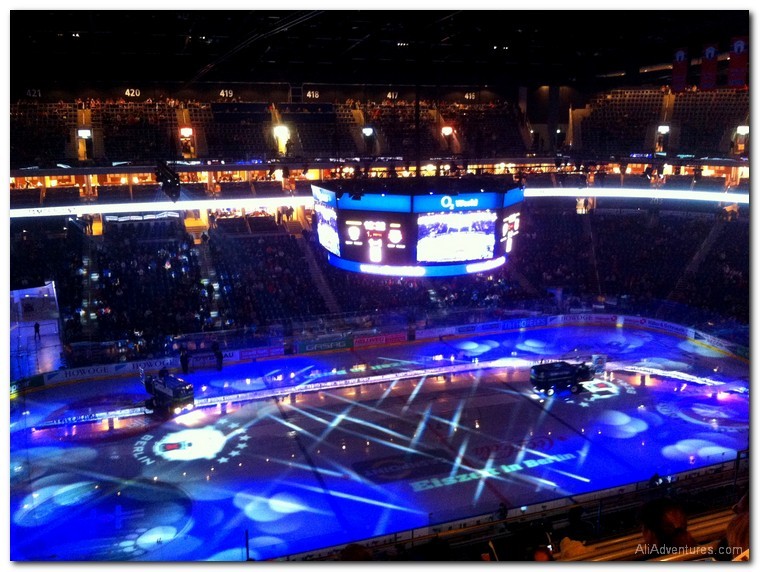 There were several other small things that I found to be a little odd, but I think you get the point. Sports are a great way to enjoy something you’re familiar with while still getting a little insight into the country you’re in. Andy and I really enjoyed the hockey game in Berlin, and we might try to go to a game in Freiburg sometime when we’re home. But as enjoyable as it was to watch the game itself, observing the cultural differences of the overall experience was quite entertaining too.

By the way, Berlin beat Munich 5-2. They are apparently a pretty good team, though I think almost any US/Canadian team would crush them.